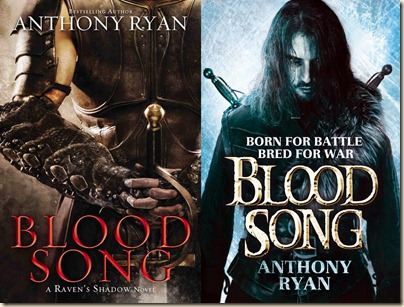 Anthony Ryan’s Blood Song was originally self-published, but Penguin snapped it up in 2012. I know a few other reviewers have already read the novel, and general consensus seems to be that it’s one to watch.

We have fought battles that left more than a hundred corpses on the ground and not a word of it has ever been set down. The Order fights, but often it fights in shadow, without glory or reward. We have no banners.

Vaelin Al Sorna’s life changes forever the day his father abandons him at the gates of the Sixth Order, a secretive military arm of the Faith. Together with his fellow initiates, Vaelin undertakes a brutal training regime – where the price of failure is often death. Under the tutelage of the Order’s masters, he learns how to forge a blade, survive the wilds and kill a man quickly and quietly.

Now his new skills will be put to the test. War is coming. Vaelin is the Sixth Order’s deadliest weapon and the Realm’s only hope. He must draw upon the very essence of his strength and cunning if he is to survive the coming conflict. Yet as the world teeters on the edge of chaos, Vaelin will learn that the truth can cut deeper than any sword.

Blood Song, the first book in Ryan’s Raven’s Shadow series, will be published by Ace Books in July 2013 in the US.

UPDATE: Rather quietly, it was announced that Orbit has bought publishing rights for the UK. The novel will be released as an eBook in April, and a Hardcover later in July. The UK artwork has been added to the top of the post, on the right.