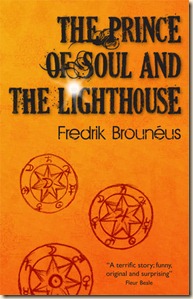 Civilian Reader has not featured enough authors from Down Under. Aside from some of the better-known SFF authors from all the way over there (e.g. Helen Lowe), not many people realise that there’s a huge SFF community down there. So, after a very amusing email from their head publicist, I discovered Steam Press (there was a very good joke about sheep and Hobbits). Anyway, I reached out for some guest posts and interviews with some of their authors. I hope to feature more Australian and New Zealand authors on the blog in the coming weeks and months, so watch this space!

To kick things off, I bring you a guest post from Fredrik Brounéus, a Swedish writer who has lived in Dunedin since 2009. His previous books include a children’s thriller and a young adult pop novel, both of which were published in Swedish. His first English-language novel is The Prince of Soul and The Lighthouse.

Having read some of the excellent Influences & Inspiration guest posts on the Civilian Reader blog, I was inspired to share a piece about one of my own muses: my worries.

I’m the worrying kind. Don’t know if it’s in my genes (my dad – a great worrier; my mom – a legendary Amazon worrier) or just a hobby turned into a habit. As a kid I kept coming up with new stuff to fear – such as the TFM (Toilet Flush Monster), who’d grab me if I didn’t reach the carpet outside the bathroom in time; or the ghoul disguised as a magpies’ nest outside our house, which had me darting past the living room window to get to the kitchen alive.

Through the years I’ve always found comfort in the assumption that this worrying side is the inevitable Mr. Hyde of a vivid imagination. And if you’re a writer, imagination is a good thing, right? (Though my writing has occasionally caused the fantasy/reality fault line to grow a bit shaky; such as the time when I was working on a scene where a character had fallen seriously ill from an infected wound. After a couple of hours, feeling utterly sick and dizzy, I staggered up from my desk. It took a few minutes and a couple of Panadols before I remembered that it actually wasn’t me who had the fever, but the character in the manuscript.)

My Swedish books all have a firm base in favorite worries: Yoga for Rock Stars (the Meaning of Life), The Hunt for the Energy Gizmo (climate change, use of fossil fuels), Drugs and Bugs (antibiotic resistance). All in all, my worries have been an ample source of inspiration for my writing. But the last couple of years I’ve also discovered a positive feedback mechanism: my writing seems to have a therapeutic effect on my worrying mind. My layman analysis is that by writing about things that worry me, I put myself in control; I get to twist, turn and shake the hell out of stuff that would otherwise be keeping me awake at night. It works as a kind of self-hypnosis – a magic trick to soothe the synapses.

For example, during the writing of my first English novel, The Prince of Soul and The Lighthouse, I was worrying a lot about overpopulation, climate change and death. As luck would have it, it turned out that two of these worries were – inadvertently – caused by an 18th century invention by an earlier reincarnation of my 18-year old protagonist. And the third (death) wasn’t all the doom and gloom I’d feared it to be. At the end of the book [spoiler alert] all problems were resolved and haven’t bothered me since. Not much anyway.

One of my two current works in progress deals with the Meaning of Life, aliens and an asteroid strike; while the other is juggling The Meaning of Life (it’s a big question) and every bad idea humanity has ever come up with. And so far my self-hypnosis hypothesis holds true; I actually can’t believe how gullible my brain is. It seems to believe anything I write (but don’t tell it I said that).

My next book is an underwater steam punkish adventure which includes a certain species of shark as a major plot element. Result? I now live on the Otago Peninsula, New Zealand – known to be a regional hot spot for Great Whites – and I’ve actually been in the water. (And I used to be nervous about swimming in the Dalecarlia River in central Sweden.) Been thinking of going kayaking even. Surfing? No way in hell. Will need to write a couple of sequels first. 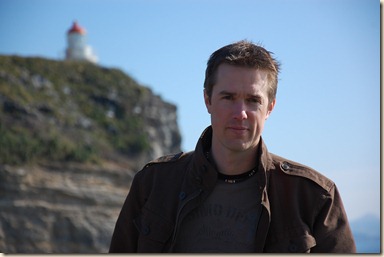 P.S. My brain – however susceptible it may be – knows perfectly well that I cannot make real life worries go away by just writing about them. I still recycle my plastics, take the bike instead of the car and avoid swimming near seal colonies.