The latest from the rather excellent Chuck Wendig, THE BLUE BLAZES, has finally got a jacket. Designed by Joey Hi-Fi (who also handled the covers for Wendig’s Blackbirds and Mockingbird), it’s pretty good: 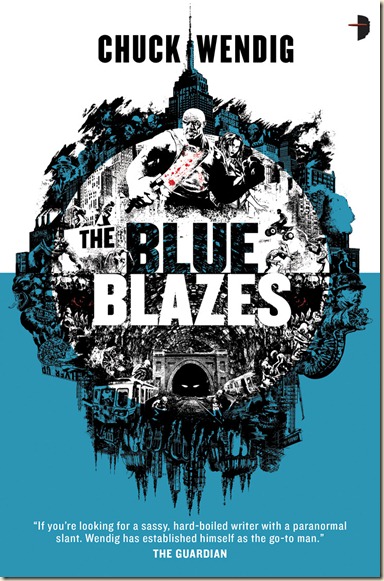 As I told Abhinav over on The Founding Fields (who had the first reveal), it reminds me a bit of the covers for Chris F. Holm’s Collectors series (also published by Angry Robot): the two-tone background with a central device is certainly reminiscent. However, The Blue Blazes get a much busier, detailed central piece. It’s eye-catching (with the skull-like overall shape), which should catch people’s eyes as they browse bookstore shelves (or online sites). At the same time, it’s detailed enough to justify long, lingering looks to admire the many elements that have gone into the design.

Criminal underworld? He runs in it.

Supernatural underworld? He hunts in it.

Nothing stops Mookie when he’s on the job.

But when his daughter takes up arms and opposes him, something’s gotta give…