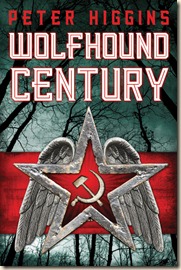 An intriguing new voice in… well, a number of different genres all at the same time…

Investigator Vissarion Lom has been summoned to the capital in order to catch a terrorist – and ordered to report directly to the head of the secret police. A totalitarian state, worn down by an endless war, must be seen to crush home-grown terrorism with an iron fist.

But Lom discovers Mirgorod to be more corrupted than he imagined: a murky world of secret police and revolutionaries, cabaret clubs and doomed artists. Lom has been chosen because he is an outsider, not involved in the struggle for power within the party. And because of the sliver of angel stone implanted in his head.

I didn’t know what to expect from this novel. I didn’t know a whole lot about it before I read it, either, save for the excellent cover artwork. What I found was a really interesting mélange of genres, mixed together to create an original, compelling and atmospheric whole. Wolfhound Century excellently bridges the gap between a speculative urban fantasy and a crime thriller. With a great Russian-flavor, too, this novel stands out even more. This is a really strong debut novel.

Detective Vissarion Lom is called to the capital city, Mirgorod, and tasked with investigating what Joseph Kantor, an “anarchist” revolutionary, is up to. Lom is chosen because he has no ties to the city, nor anyone important who lives there. He is sent off into a labyrinth of lies and veiled allegiances, brewing revolution, and a government dead set on maintaining its iron-grip on the populace.

Higgins has written a very interesting and rich, post-Bolshevik Revolution Russia-inspired world. I must admit I wasn’t entirely sure if this was actually based in the real world or not (there is a Mirgorod region in the Ukraine), but while the world building feels full this puzzle was never settled for me. I read it with an assumption that it was set in a secondary world. The author draws on a number of characteristics of the time mentioned, and weaves together something new and compelling. There are strong class resentments, with revolutionary language spouted by both young and old agitators alike. Former aristocrats and intellectuals, those still alive at any rate, have multiple difficulties finding a place in this post-revolution world (one of Lom’s friends, for example, is blocked from teaching at the university).

The story evokes the paranoia and fear generated by the secret police and intelligence services (the “Vlast Secret Police”), which would generate files not only on dissidents by their friends, families, neighbours and associates, but also everyday people who happen to enter these undesirables’ orbits. Lom works with Mirgorod’s secret police chief, and must dodge internal rivalries and agendas that are at odds with the State’s and the service’s mandate. Higgins evokes a society that is rife with distrust, and lays bare a state afraid of its own people. Against this backdrop, Lom’s investigation becomes ever-more peculiar, as the chunk of angel flesh in his forehead connects him to strange occurrences in the city.

Higgins’s writing style is pretty fantastic – at times, it adheres closely to a fast-paced thriller style, with stripped down and fluid prose. But at other times, his passages of description can be almost ethereal.

“The taste of the living rain was in his mouth. The smell of it on his face and his clothes. He had heard of such things, the possibilities of them. You don’t live at the edge of the forest without being sometimes aware of the wakefulness of the wilder things: the life of the wind, the sentience of the watchful trees. The memory of the damp, living earth. But not in Mirgorod. He had not expected to find such things here: Mirgorod was the capital of solidity, the Founder’s Strength, the Vlast of the One Truth.”

And here’s another example, from later in the book, after the story really starts to get strange, and shades of Miéville and Gaiman-esque otherness crept out:

“The sea is slow and always. Days graze its surface and the sea’s skin rises and falls with the barely perceptible pulse of the tide. He can feel the unseen pull of the moons: a gentle lunar gravity tugging at his hair and palpatating with infinite slowness the ventricular walls of his heart. But days and nights touch only the thinnest surface of the sea, and all the while, below the surface, beneath the intricate, flashy caul, there is darkness: coiling and shouldering layers inhabited by immense, deathless, barrelling movers.”

I sometimes wondered about the level of ‘otherness’ in Wolfhound Century. Some elements were certainly well-realised and developed, but others seemed to be afterthoughts. The extent of the steampunk contraptions, for example, was rather limited and seemed tangential, not really relevant to the story. They are a nice touch, certainly, but at the same time oddly distant. There are giants mentioned fairly early in the novel (during a bank robbery), which seem to disappear for much of the rest of the story – although they do reappear in Part Two (which starts surprisingly late in the book).

Wolfhound Century has a myriad, colourful cast of investigators, agitators, impressionable idealists, disenfranchised intellectuals, and artists, an angel, mindless automatons, and sentient rain. It is a story of revolution, of philosophy, and mystery. The narrative momentum builds slowly to begin with, but builds to a whirling, fantastic and mind-bending ending.

This is a great, dark and fantastical thriller. It has the suspense of classic spy thrillers, mixed with the strange and the bizarre found in any number of critically-acclaimed fantasists. I’d be amazed if this doesn’t do well. Certainly recommended.

Wolfhound Century will be published in March 2013 by Gollancz (UK) and Orbit (US).

Posted by Civilian Reader at 8:38 AM