Guest Post: “The Worldbuilding of the Four Realms” by Adrian Faulkner

Hot on the heels of last week’s interview, Adrian Faulkner has written a guest post on how he went about creating the setting for his debut urban fantasy novel, The Four Realms. 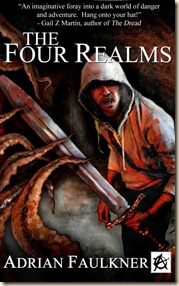 In The Four Realms, we spend some time in the world of Venefasia and the city of New Salisbury that lays within it. Connected to our world through various gateways, black market goods and elements of our commerce have found their way in. New Salisbury has a Starbucks and the streets are filled with diesel-chugging lorries and Tuk Tuks. It’s a fun and complex world to write but it started with a very simple image.

I was watching the news or something like the Discovery channel when they were reporting on an Amazon tribe. Apparently this was one of the most remote tribes in the world, with next to no human contact. The report was making a very big deal out of this. And yet, there in the background a small child was running around in a Nike T-Shirt.

That image stayed with me for a long time after the programme. How had it got there? Had the programme makers given it to the tribe as some form of gift? Had one of the tribe ventured into civilisation and brought it back with them? Had it been someone else’s old shirt, donated to charity and then handed out as some form of aid?

Whatever it was, it got me thinking about the reach of our major brands. You can pretty much go to any city in the world today and find a Starbucks or McDonalds. Even when the Iron curtain existed and many Western goods were banned, they still managed to find their way into places like Russia through the black market. Elements of culture (both high and low) seem unstoppable in their ability to spread and mix – just look how Psy’s Gangham Style has evolved from K-pop into geek parody videos .

It struck me then that if the wardrobe into Narnia existed, it wouldn’t just be Turkish Delight and gas lamps that found their way into the world. Such gateways into other worlds wouldn’t purely be used for children to go and have tea with Fauns. No, just like everything from prohibition to the internet, there would be those who would find a way to profit from it. And where there is profit, organised crime would not be far behind.

I love a lot of gritty fantasy, it’s up there with urban fantasy for me as my favourite sub-genre, but at the time I was first considering all of this I read a lot of articles that annoyed me. In a bid to legitimise fantasy, the gritty fantasy sub-genre had turned its back on a lot of the tropes surrounding magical races and indeed, even magic. I love the results but articles where people would proclaim that gritty fantasy had thrown off all the old tropes of fantasy and was the only way forward got me riled.

“You’re still using the medieval world trope, though,” I would say.

Don’t get me wrong, I love this trope and long may it continue to be used. But it’s still a trope and it made me feel that those articles were being slightly dishonest. And as for being the only way forward? I love that Fantasy is so diverse, that it can be weird or mimic legend or be full of gritty realism. I think this is the genre’s strength and undying appeal – that it can be many things.

I decided that my world would be more third world than medieval world, not for reasons of any social commentary but because that’s what I think would happen if they really existed.

And so the city of New Salisbury has your taverns and towers, city walls and horse and carts, but it also has fast food and black market goods, cars and drugs.

I spent a long time considering whether to create my own races (and by that I mean really create them, not just rename ones that already existed). I’ve read many a great fantasy novel that’s done this really well. But in the end, delving into folklore and using some of the more traditional races, such as dwarves and elves, felt a more natural fit.

I came to the conclusion that the traditional races have existed for hundreds of years (certainly before Tolkien) and if the success of games like World of Warcraft tells us anything, it’s that they are still popular. Besides, I felt the use of traditional races in a non-traditional world worked much better for the sort of story I wanted to tell.

There are those, of course, who believe that all magical races began with Tolkien. I didn’t want to be accused of being one of those, and so I spent a lot of time researching Folklore, ensuring that my versions of the magical races match the versions that have been around for hundreds of years. In doing so, I decided to go wider than just the European folklores.

I found interesting mythical creatures from places such as New Zealand and the Philippines. I spent some time worrying about cultural appropriation, that by including these creatures in my story I was somehow bastardising them away from their source. But eventually I decided that due to the nature of the world and the way our world had invaded New Salisbury an element of cultural appropriation worked within the context of the worldbuilding. I’m sure there will be those that will tell me where I got it wrong but that’s a criticism I’m willing to accept.

And so creatures such as the Inuit Adlet and Filipino Tikalabang are as much a part of New Salisbury as the European Elf and Dwarf. This is a world where a leprechaun can own a nightclub; a world where Centaurs can be armed with shotguns.

It’s into this world that Maureen Summerglass stumbles, trying to get to the bottom of the murder of a friend. It’s here she discovers that she might just be the first human woman ever to be able to do magic.

The Four Realms is out now, published by Anarchy Books. Find out more on Adrian’s Website and Twitter.