The Spider, Vol.1 – “Terror of the Zombie Queen” (Dynamite) 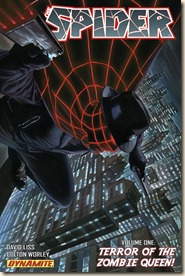 One of the most celebrated pulp heroes of all time is back, and re-launched into the 21st century!

Richard Wentworth is a decorated war hero who has sacrificed everything, including the woman he loves, for duty. But the New York City Wentworth returns to is riddled with crime and corruption. With the police overwhelmed and a populace helpless, Wentworth becomes The Spider, a vigilante as ruthless and merciless as the criminals he hunts. But now there’s a new danger on the rise. A deranged woman called Anput has begun a series of attacks that turn ordinary citizens into mindless zombies, bringing New York and the police force to its knees. Wentworth will stop at nothing to save the city he's sworn to protect, but in the process he will risk his family, his friends, and the woman he still loves.

I caught the first couple of issues of The Spider when the series was re-launched last year. One of the things that jumped out at me, alongside Liss’s great story, was Worley’s superb artwork. With this first collection, readers get the debut story-arc, which is a mixture of vigilante justice and horror, beautifully rendered. 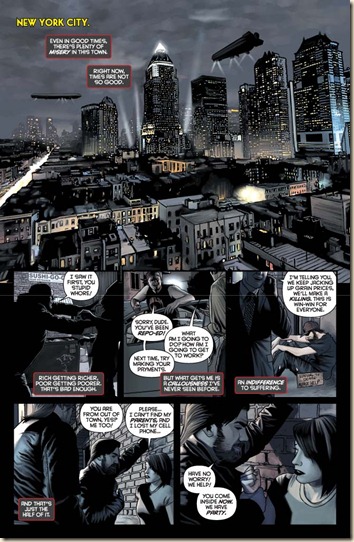 The situation in New York has become dire. A new wave of crime has swept the city. It is more violent, more brazen, more common. It is too much for the NYPD to keep on top of. It is time for a new type of justice. Our protagonist is more than happy to fulfill the role. For people who thought Batman was dark, meet The Spider:

“In the movies, in the comic books and TV shows, the guys in masks live by a code. You don’t take a life. You don’t cross the line. It’s too late for that. Some people don’t deserve a second chance. What gives me the right to decide who lives and dies? Not a damn thing… I stepped up. Because someone had to, and because I could. And I do it as I see fit.”

Richard Wentworth is recently returned from deployment (never specified, but I assume Iraq or Afghanistan, maybe both). He’s drinking too much, meting out his own brutal brand of justice at night, and also hiring himself out as a freelancer to the NYPD. Like Batman, he’s rich, thanks to his father’s company, and arms manufacturer. His freelancing gives him access to crime scenes and information that he can use in his Spider side-gig. 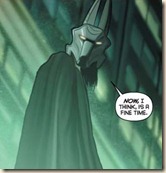 He is brought to a crime scene, and is introduced to the work of Anput (right), some criminal mastermind who has styled herself after an Egyptian goddess of death. She’s turning people into zombies, with a gas closely related to one of papa Wentworth’s developments. Naturally, this means Richard is booted off the investigation, much to his chagrin. As Richard attempts to work his way back onto the case, he is assailed by Anput and an accomplice (whose identity was not exactly a surprise) on one side, and his desire to protect and win back Nita.

The final chapter of the book takes a look at Richard’s past in Iraq, and how even then his sense of justice was finely honed. A man from his past reappears, and gets mixed up with a gang of criminals. Richard steps in. Jackson is trying to redeem himself, and also get to the bottom of a mystery: the identity of the Wingman, a new villain stalking the city, committing comparatively petty crimes that still nevertheless have bodycounts. At the same time, there are threats against the life of a mayoral candidate. Could it be time for a new ally for the Spider? There were a couple of confusing pages in this chapter, where it wasn’t entirely clear what was happening, but it didn’t exactly upset the flow of the story much. It was a nice, self-contained mystery, executed with style.

There are a lot of detective, pulp and comic tropes lovingly incorporated into the story. For example, the difficult and suspicious Detective Joe Hilt: convinced Richard is the Spider, but completely unable to prove it, stymied by Richard’s closeness with the Police Commissioner, Stanley Kirkpatrick, who also happens to be his ex-fiancée’s husband. There’s also a nice humor running through the story. A bit black, a bit gallows. Good stuff. 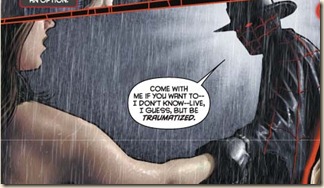 The artwork, as I mentioned at the start, is superb. In particular, the weather effects – Worley has a real gift for using rain in particular as an enhancing trick. There is an element of pathetic fallacy to it, a noir-ish component that steeps the story in atmosphere. It works really well.

Overall, this is a superb, modern vigilante story, with a fondness for classic stylings. It is well-written and well-paced, eye-catching. I was hooked from start to finish, and read it in one sitting. I can’t wait for the second volume.

One of the classic-look Variant series of covers