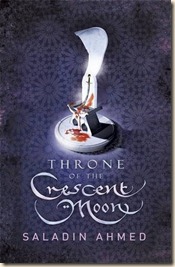 A new voice in adventure sword & sorcery, finally gets a UK release

The Crescent Moon Kingdoms, home to djenn and ghuls, holy warriors and heretics, are at the boiling point of a power struggle between the iron-fisted Khalif and the mysterious master thief known as the Falcon Prince. In the midst of this brewing rebellion a series of brutal supernatural murders strikes at the heart of the Kingdoms. It is up to a handful of heroes to learn the truth behind these killings.

Doctor Adoulla Makhslood, “the last real ghul hunter in the great city of Dhamsawaat,” just wants a quiet cup of tea. Three score and more years old, he has grown weary of hunting monsters and saving lives, and is more than ready to retire from his dangerous and demanding vocation. But when an old flame’s family is murdered, Adoulla is drawn back to the hunter’s path.

Raseed bas Raseed, Adoulla’s young assistant, is a hidebound holy warrior whose prowess is matched only by his piety. But even as Raseed’s sword is tested by ghuls and manjackals, his soul is tested when he and Adoulla cross paths with the tribeswoman Zamia.

Zamia Badawi, Protector of the Band, has been gifted with the near-mythical power of the lion-shape, but shunned by her people for daring to take up a man’s title. She lives only to avenge her father’s death. Until she learns that Adoulla and his allies also hunt her father’s killer. Until she meets Raseed.

When they learn that the murders and the Falcon Prince’s brewing revolution are connected, the companions must race against time—and struggle against their own misgivings—to save the life of a vicious despot. In so doing they discover a plot for the Throne of the Crescent Moon that threatens to turn Dhamsawaat, and the world itself, into a blood-soaked ruin.

I’ve already written a review of Ahmed’s Throne of the Crescent Moon, so I won’t reproduce the whole thing here again. But, I thought I’d offer a compressed version of my earlier review, picking up on a couple of important things (in my opinion) – mainly Ahmed’s style and the world. I didn’t find the novel perfect (as is often the case with me, the issues lay in some pacing anomalies). Overall, though, this is a very strong debut novel, set in an interesting world populated by three-dimensional characters.

What stood out for me is the fact that Throne of the Crescent Moon is, above all else, a character-driven story focused on three key players. Each provides a distinct voice, and it was great to read and learn about the world filtered through their differing perspectives: Adoulla’s world-weary cynicism and exhaustion; Raseed’s youthful fervour, energy, confidence and enthusiasm; Zamia’s cautious suspicion, and self-consciousness.

The world we explore alongside Adoulla, Raseed and Zamia is fantastic. Dhamsawaat, a sprawling city with a Middle Eastern-flavour, reminded me a little of historic Istanbul and Casablanca. Ahmed conjures up a great image and atmosphere for the city and wilderness, realising the city on the page very well, and I felt quickly at home in the setting.

The novel has a measured feel to it: Ahmed lets his story unfold in an unhurried manner. This is no bad thing, and matches the social interactive style of the characters – they spend a lot of time talking around things, allowing for a better, deeper picture of the world, its people, and the city’s political climate (which is extremely tense, and still adjusting to the rule of a new Khalif). This does mean that not a whole lot really happens. There’s a lot of sitting around, talking and figuring things out. It’s a scholarly investigation, but also a character piece. Some people may not like this – if you’re after epic battles and frequent combat, then Throne of the Crescent Moon will probably not be for you. That being said, the last 15% of the novel has some great action, as the story comes to a dramatic, tragic denouement.

The magic system is wonderfully complete, original, and even realistic. It’s not all flash, and there are repercussions and costs to using the more impressive spells. The “evil” magic is extremely, brilliantly sinister (the “skin ghuls” are dark genius, for example), and the ‘man-jackal’ is an awesome enemy that harries Adoulla and his companions, both psychologically and physically.

Ahmed’s writing has a steady pace, and there is a natural flow to his prose. That being said, if I had one niggle, it is with a certain, sometime inconsistency in the style. There are moments when certain idioms feel a little forced. For example, the use of phrases like “five and ten years old”, “damned-by-God” and “mate-of-the-soul” seemed needlessly archaic or affected, compared to the rest of the writing. It’s certainly forgivable, but it still bugged me, just a little, as other idioms are ‘translated’ (for want of a better word) more naturally – “unless I miss my guess”, for example. It felt a little like this approach was taken to make the characters feel more exotic or foreign to the standard European-influenced fantasy characters. I don’t think it was really necessary, though, as it was obvious from pretty much everything else that these characters were not just Europeans living in a Middle Eastern-style fantasy world. 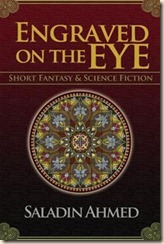 Overall, this is a very strong novel. I loved the setting, the characters were engaging and well-drawn, and the story has a classic feel to it: power politics, personal struggle, and adventure.

If you want more from Ahmed, I’d recommend his short story collection, Engraved on the Eye, which is available as an eBook from most eBook sellers – for example, Amazon UK, Amazon US, Kobo, Barnes & Noble.

In related news, Throne of the Crescent Moon was recently released in paperback in the US (DAW Books).