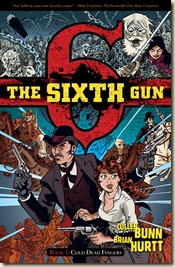 During the darkest days of the Civil War, wicked cutthroats came into possession of six pistols of otherworldly power. In time the Sixth Gun, the most dangerous of the weapons, vanished. When the gun surfaces in the hands of an innocent girl, dark forces reawaken. Vile men thought long dead set their sights on retrieving the gun and killing the girl. Only Drake Sinclair, a gunfighter with a shadowy past, stands in their way.

I really enjoyed this book. I have a real fondness for the Wild West and related fiction, fantasy or whatever, and The Sixth Gun offers an addictive mix of a post-Civil War American West and some sinister, supernatural shenanigans. The writing is great, and the art superb, making this a comic that works on basically every level.

This wasn’t meant to be a full review. Mainly because I read through this in one sitting and took no notes whatsoever. Also, because going into too much detail will spoil things – events move very fast for the characters, and each issue is filled with revelations and momentous turns of event.

The story, which follows two opposing groups seeking out the titular Sixth Gun, is a great tale of greed, destiny, and gunslingin’. You see, an evil general – Oliander Bedford Hume – was gifted with six mystical six-shooters, each of which bestowed upon its wielder a particular power: prophecy, healing, strength, pestilence, necromancy, and fire. General Hume gifted these weapons to his closest five companions, keeping one for himself. After his death, the sixth gun was taken by his killer, and hidden from his henchmen and anyone else who wished to use it for nefarious purposes. 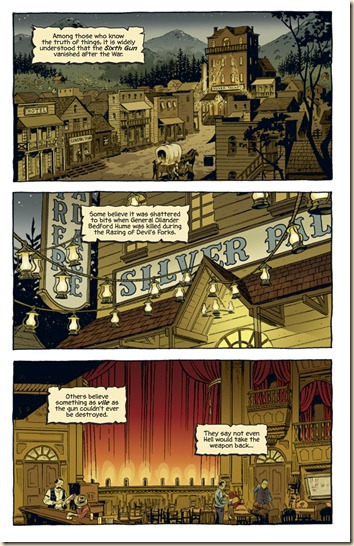 This first book is the story of how the sixth gun was relocated, and the fight for its control. Drake Sinclair, a gunfighter whose past is not as virtuous as he would like, joins with fellow fighter Billjohn O’Henry, and an unwitting Becky Montcrief (who picks up the Sixth Gun, only for it to imprint on her). Together, they do everything in their power – after a bit of getting used to each other, of course – to stop General Hume from bringing his plan into fruition.

I loved the supernatural six-shooter conceit, which I think is pulled off expertly, and throughout the book Drake and the others learn to use the weapons’ powers against their wielders and also, in a few instances, to their own benefit. Revelations and tragedy plague our heroes on their journey. At the end of this, nobody will be the same. 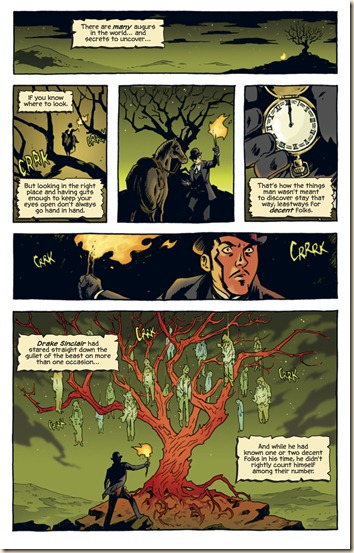 The Sixth Gun offers a great blend of Western and the supernatural: we are treated to the Gallows Trees (above); mystical pistols; risen, angry dead generals; Pinkerton agents; gunfighting; mystery and revelation.

The artwork is great throughout, managing to be both bright and vivid but also, when appropriate, moody and atmospheric. There is a chapter set almost entirely in a canyon that is particularly good.

This is a great, fast-paced story. I was hooked from the very beginning, and can’t wait to get my hands on the second volume of the series. There is a tragic ending to this volume, but it sets up what I’m sure will be a great future. 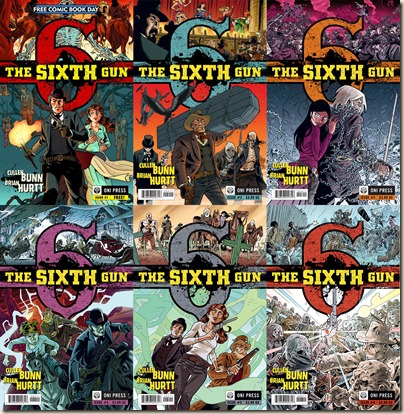 In related The Sixth Gun news, NBC has recently ordered a pilot episode for a TV series to be based on this comic. This is great news, and congratulations to Cullen Bunn and Brian Hurtt!

Posted by Civilian Reader at 2:20 PM