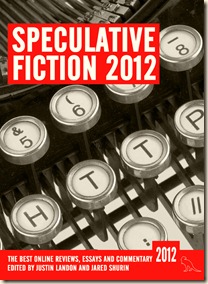 Last year, I began a partnership with Jared Shurin, co-owner/editor of Pandemonium Fiction, to release an anthology titled Speculative Fiction 2012, The Years Best Online Reviews, Essays and Commentary, with proceeds to be donated to charity.

Our goal, if any such thing can be claimed, is to create a record of all the incredibly rich content being created on the web. We put out a call for submissions from the community at large and received over 200. Accounting for our own finds, that means well over 300 pieces of non-fiction that range from reviews, to essays about the field, to what it means to live the genre life (or something to that effect).

Over the next few weeks we’ll be narrowing that down under fifty, contacting authors to get rights, and writing our witty and charming introduction that will both highlight our complete capability as curators of taste and impugn our credibility with self aggrandizing adjectives. If all goes well, the book will be released in late February just in time for the ever important Ides of March holiday season.

I’ll be interested to know what’s in this book, and am certainly looking forward to giving it a read. I’m sure I’ll find many online writers who have managed to avoid my attention thus-far.

[The book’s artwork was done by Sarah Anne Langton.]