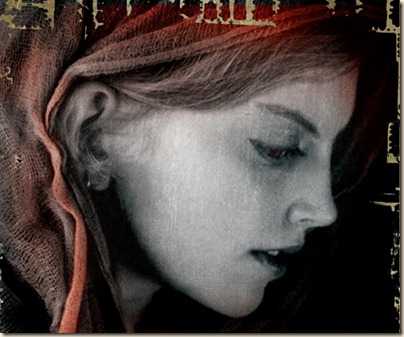 James Rollins, author of the Sigma Force scientific thrillers (which I’m rather fond of) has teamed up with Rebecca Cantrell to write a new series of thrillers, this time with a slight Dan Brown-Da Vinci Code slant to it. Only, hopefully much better. As I say, I’m fond of Rollins’s Sigma novels, so I have high hopes that he’ll do as good a job with this new venture. (I have a copy of the book, and it’s inching its way up the ever-growing Mt. TBR.) The series also includes an eShort prequel (of sorts), the artwork for which was recently unveiled. I decided to do a side-by-side comparison of the US and UK artwork for the two, as they are quite different.

First up, for the novel, Blood Gospel: 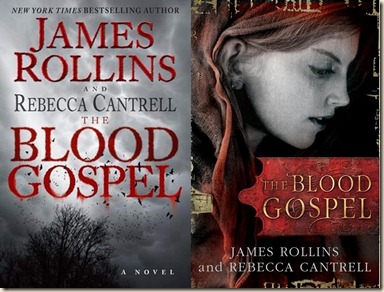 Personally, I prefer the US cover – the grey sky and red lettering works for me. And I tend to prefer covers that don’t feature figures. Not sure why, though. That being said, it’s a nice image of the woman, but I’m just not sure it’s as good as the spooky tree… I also like the device used for the title – as if it’s a kind of vintage sign. Here’s the synopsis for Blood Gospel (per Goodreads):

An earthquake in Masada, Israel, kills hundreds and reveals a tomb buried in the heart of the mountain. A trio of investigators — Sergeant Jordan Stone, a military forensic expert; Father Rhun Korza, a Vatican priest; and Dr. Erin Granger, a brilliant but disillusioned archaeologist — are sent to explore the macabre discovery, a subterranean temple holding the crucified body of a mummified girl.

But a brutal attack at the site sets the three on the run, thrusting them into a race to recover what was once preserved in the tomb’s sarcophagus: a book rumored to have been written by Christ’s own hand, a tome that is said to hold the secrets to His divinity. But the enemy who hounds them is like no other, a force of ancient evil directed by a leader of impossible ambitions and incalculable cunning.

From crumbling tombs to splendorous churches, Erin and her two companions must confront a past that traces back thousands of years, to a time when ungodly beasts hunted the dark spaces of the world, to a moment in history when Christ made a miraculous offer, a pact of salvation for those who were damned for eternity.

Here is a novel that is explosive in its revelation of a secret history. Why do Catholic priests wear pectoral crosses? Why are they sworn to celibacy? Why do the monks hide their countenances under hoods? And why does Catholicism insist that the consecration of wine during Mass results in its transformation to Christ’s own blood? The answers to all go back to a secret sect within the Vatican, one whispered as rumor but whose very existence was painted for all to see by Rembrandt himself, a shadowy order known simply as the Sanguines.

In the end, be warned: some books should never be found, never opened—until now.

Secondly, for the eShort, City of Screams, we have these two covers: 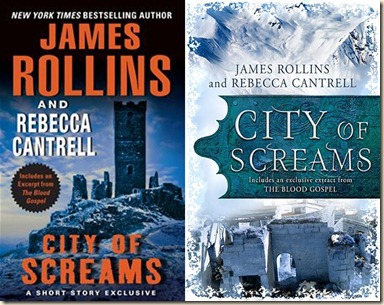 The British version at least maintains some continuity with the style of the novel’s cover. That white-and-blue palette for the UK version is just too different and bright for my taste. The two versions of artwork for the novel suggest a darker story, as does the US cover for the eShort, but this bright UK design makes me think it’s either set somewhere really cold, or it’s not exactly a dark story. US cover wins for the eShort.

Here’s the City of Screams synopsis (again, per Goodreads):

In the haunted, war-torn highlands of Afghanistan, amid the ruins of Shahr-e-Gholghol, an archaeology team is massacred in the night. Sergeant Jordan Stone and his crack forensic team are called in to examine the site, to hunt for the perpetrators of this horrific act. But the discovery of a survivor — a child of ten — will shatter all the team knows about life and death. Among the crumbling bones of dead kings, something hoary and murderous stirs out of the ancient past, lurching forward to claim vengeance on those still living.

Included with this thrilling story is a sneak peek at The Blood Gospel, where the further exploits of Sergeant Stone and his team will be revealed.

Blood Gospel is out now in the US, published by William Morrow, and will be published in the UK in April 2013, by Orion. City of Screams was published in October 2012 in the US, but I’m not sure when it will appear in the UK.