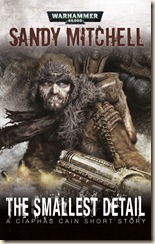 The busy, dangerous life of a Commissar’s aide…

The ‘simple’ task Jurgen is sent on by Ciaphas Cain proves to be nothing of the kind… Just how much with the aide tell his master about what really happened?

It’s been a fair while since I last read anything in Mitchell’s Ciaphas Cain series. I also have to admit that I wasn’t hugely impressed by the previous one that I did read. As a result, I may have missed one or two. Nevertheless, I do enjoy the characters, and thought this short story sounded quite fun, centering as it does on Jurgen, Cain’s much-put-upon and odorous personal aide.

After going on a successful trip to the quartermaster’s store, utilising all of the pull he is able, thanks to his boss’s status as an Imperial War Hero, and all the manipulative skills he can bring to bear, Jurgen is ambushed by some clumsy, rather incompetent local thugs. Naturally, he investigates. As the title suggests, it’s the smallest detail that can either lead to a successful case and prosecution…

The Smallest Detail is a fun diversion, and a good taste of Mitchell’s writing, and a decent introduction to one of his main characters. True, Jurgen rarely features prominently in the Cain novels, but he is always present, lingering in the background much as, I’m sure, his smell does.

Overall, this is a nicely executed short story. It would be nice to see some more short stories featuring these characters, too, actually. Reading this has also made me reassess my unconscious downgrading of the Cain novels, and I think I’ll have to try the two I’ve missed.

If you’re looking for a quick jolt of Warhammer 40,000 fiction, this would suit your needs perfectly.