I’ve recently got back to Britain for a short spell. Jet-lag has finally struck, so I’m afraid there won’t be a particularly involved post for a couple of days. I hope to get some more reviews up this week, but please bear with me…

In the meantime, here are some books that were waiting for me upon my return (you can count of at least a few of them featuring more on the blog in the future): 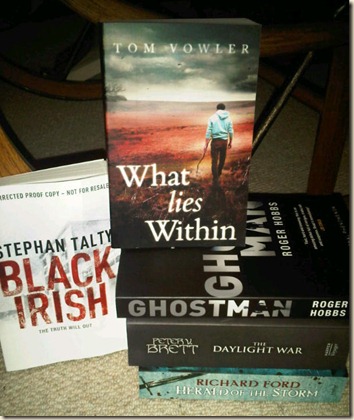 It’s a nice little haul, actually – four of the five are really interesting, two are must-reads (no prize if you can guess which two), and only one hasn’t completely fired my interest. 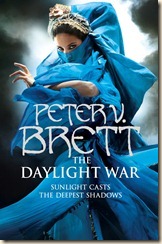 So, I loved the two short stories and The Painted Man, but have been slack about getting to The Desert Spear… I will do my best to get this read ASAP, but I’m not sure I’ll be able to get it read and reviewed before it’s official release date in the UK and US. I will, however, see about getting an interview with Peter… Watch this space. 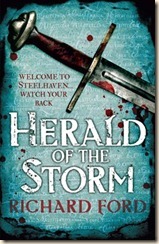 I heard about this first from a Fantasy Faction post, in which they listed off their most-anticipated books of 2013. I did some more digging and Herald of the Storm is definitely on my own most-anticipated list for this year. Which makes it extra fortuitous that I have a copy of the book. 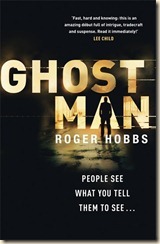 But I only have 48 hours, and there's a guy out there who wants my head in a bag.

I hadn’t heard much about this novel before this copy arrived, but it certainly sounds like something I’ll enjoy. I haven’t been reading as many thrillers as I usually do, so you can be sure that this one will be very high on my TBR pile for the coming months. 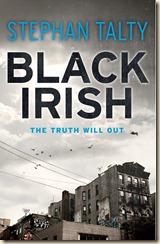 Harvard-educated Detective Absalom ‘Abbie’ Kearney has returned to ‘The County’ – an Irish enclave in Buffalo, NY – to take care of her ageing father, legendary former cop John Kearney. In one of America’s most deprived and dilapidated cities, tensions run high and Abbie’s day job is never easy. But when it becomes apparent that a relentless and merciless killer has set to work, it’s about to get a lot harder. Faced with scenes of inconceivable violence, Abbie’s investigation takes her to the heart of this fiercely closed community. And the darkness she finds there will affect her life in ways she could never have imagined...

Another novel I’d not heard anything about, but it certainly sounds interesting. There’s something about it that made me think of Dennis Lehane or someone like that. I’ll be sure to get to this ASAP. 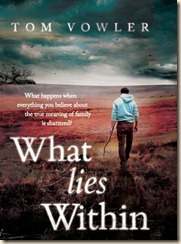 Tom Vowler, What Lies Within (Headline)

Living in a remote Devon farmhouse, Anna and her family have always been close to nature, surrounded by the haunting beauty of the moor. But when a convict escapes from nearby Dartmoor prison, their isolation suddenly begins to feel more claustrophobic than free. Fearing for her children's safety, Anna’s behaviour becomes increasingly irrational. But why is she so distant from her kind husband Robert, and why does she suspect something sinister of her son Paul? All teenagers have their difficult phases...

Meanwhile, a young idealistic teacher has just started her first job, determined to ‘make a difference’. But when she is brutally attacked by one of her students, her version of events is doubted by even those closest to her. Struggling to deal with the terrible consequences, she does what she can to move on and start afresh.

As the two narratives converge, the tension builds to a devastating denouement, shattering everything you thought you believed about nature, nurture and the true meaning of family.

This could be interesting. The premise hasn’t grabbed me as much as Ghostman and Black Irish, but it nevertheless has me intrigued. I’ll see what I can do about getting to it, but it probably won’t be immediate or in the very near future.