The Grimm Universe UNLEASHED: The next Zenescope Event 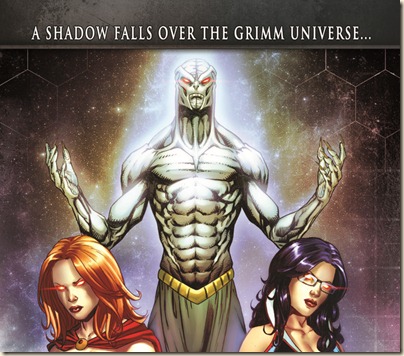 Zenescope Entertainment, the publisher of Grimm Fairy Tales and Wonderland hit comic series (among many others) has announced its plans for an upcoming, major cross-title event, “UNLEASHED”. This is, I believe, their first since The Dream Eater Saga (which I actually have, but keep forgetting to read…)

The event will be spread across six separate mini-series, clocking in at a total of 24 issues (including some “oversized” issues), and the story will tie directly into Zenescope’s popular Grimm Fairy Tales Universe (or “GU” for short). In true Zenescope style, the story focuses on reinterpretations of classic horror monsters and myths, and will be told from the perspective of their hunters.

The main mini-series is the eponymous Grimm Fairy Tales: UNLEASHED, which will last for seven issues. The story begins with the release of hundreds of formerly-trapped vampires, werewolves, demons and zombies, all of which are released into the unsuspecting world by the not-particularly-interestingly, but appropriately-vague-sounding “The Being.” Four separate monster hunters, who will also feature in separate Unleashed mini-series, are at the core of the story. In order to stop all the (I assume) rampaging beasties, the hunters must join forces with GU’s busiest of heroines, Sela Mathers.

The five other mini-series follow the stories of the monsters that exist within the Grimm Universe: The Eternal (Vampires), The Unseen (Demons), The Hunger (Werewolves) and The Cursed (Zombies). The fifth series, entitled The Hunters: Shadowlands, will follow (you guessed it) the hunters, including Zenescope’s reimagined Van Helsing. 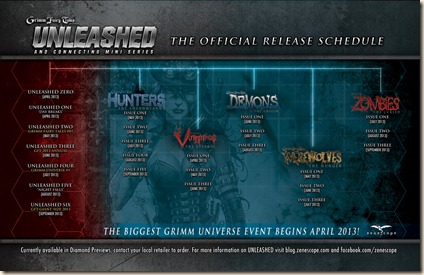 Zenescope’s Editor-in-Chief, Ralph Tedesco, had this to say about the upcoming event:

“UNLEASHED crosses several genres with a blend of horror, fantasy and action. We’ve wanted to bring classic but updated horror monsters into the Grimm Universe for a while, and we came up with an all-encompassing event that would allow us to introduce a lot of great new characters in a captivating way. A couple of examples include a reinvented female version of the classic Van Helsing character and Elijah [below], and a freed slave from the 19th century who kicks zombie ass. Fans are in for something they never would have expected to see in Grimm and they’re going to absolutely love it!” 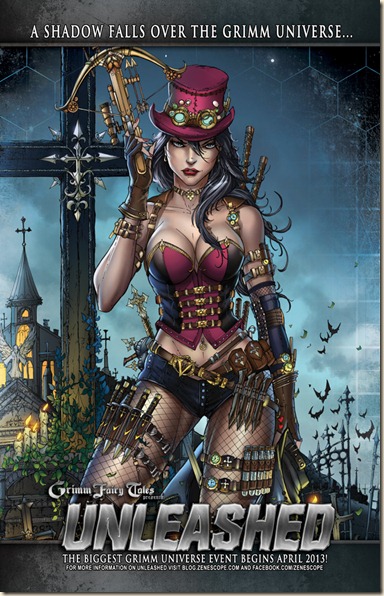 I’m actually quite intrigued by this big Event. Sometimes, comic Events can be a bit too much (see many from DC and Marvel…), but given that this one seems to incorporate a lot of new characters, it could end up being quite a hit. I’ll be sure to bring you reviews when and if possible.

Posted by Civilian Reader at 8:18 PM