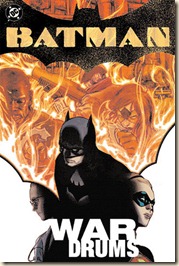 Familial discord lies at the heart of BATMAN: WAR DRUMS as Batman is taxed to the limit by new threats and trouble within his family. When Tim Drake’s father discovers his son's identity as Robin, Tim is forced to quit the team. Everyone must adjust as the Spoiler Attempts to fill his boots, with disastrous results.

I bought this a while ago, but for some reason took my sweet time getting around to it. And damn it was good. I hadn’t really been sure what to expect from it, but everything from the writing to the artwork is fantastic. There’s a nice balance between Gabrych’s darker chapters and Willingham’s slightly lighter chapters, and I was hooked from the first page until the end.

The synopsis doesn’t really do the story justice. It basically just sets the scene for what is about the happen in the book. The tale is set shortly after the events of Hush, a year-long Batman event that tested Batman’s mettle against a sinister force from his past, hell-bent on revenge for a perceived wrong. During Hush, Clayface was successful in his attempt to rattle Batman by taking on the appearance of Jason Todd (the second Robin, who the Joker murdered in Death in the Family). In War Drums, Batman is still reeling from that experience, and is angrier and more aggressive than ever. It doesn’t help that it’s the anniversary of Jason’s murder.

Gabrych offers two storylines, that are connected by the breakdown in criminal leadership in Gotham – something Batman has a plan to take advantage of, by installing an ally at the top of the criminal totem pole, as a means of gathering information and slowly breaking it down from the inside. In addition, there is a contract killer stalking and killing potential Robin’s – hunting the teenagers in Gotham who bear physical similarities to Tim Drake – unaware that he is no longer Robin, and that Stephanie Brown has taken up the mantle. This storyline will also lead to the showdown that will decide on whether or not Stephanie can keep the role of Robin. (It’s an emotional few scenes, when it unfolds.)

First, a new drug has hit the streets of Gotham, and Batman is systematically beating his way to the source. The story connects to a mother whose baby appears to be connected with a leading criminal in Gotham, and possibly a celebrity. (I don’t want to spoil too many things, as there’s a lot going on.) He’s much darker, clearly suffering from depression and a type of P.T.S.D., and has withdrawn from the extended Bat-family. He’s meting out far harsher judgment on the perps he encounters, which is making some (Oracle in particular) worry for him. 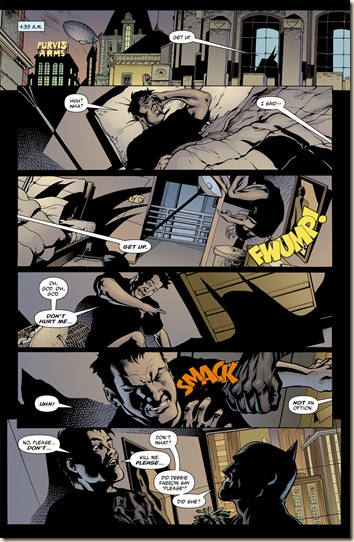 Second, the “Mugre” has come to Gotham, a strange contagion that rots those exposed to the bone in a matter of days. Batman and a couple of new allies – Orpheus and Tarantula, from nearby Blüdhaven – investigate and get to the root of the cause by sifting through myth and reality (win for science). I thought this was a pretty cool story, and Kafka was an particularly interesting character (not sure where or even if he’s appeared before). 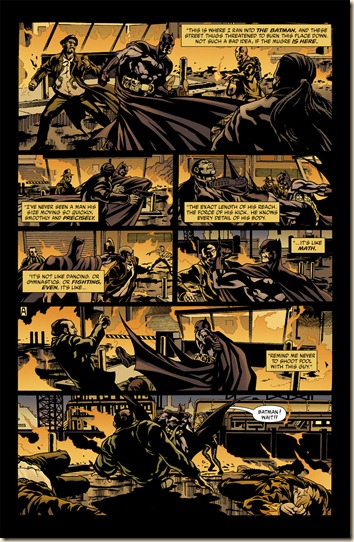 I really liked Bill Willingham’s story about a retired Tim Drake and Stephanie Brown’s attempts to become Robin. Still reeling from his confrontation with Clayface-Jason, and Tim’s forced retirement, Alfred does not think it’s a very good idea. He is particularly concerned about Stephanie, who has been operating as the Spoiler against pretty much everyone’s wishes, and her lack of experience and training. After Batman makes the decision to let her try out, Alfred can’t stop himself from responding, “Pardon my harsh words, Master Bruce, but have you lost your mind?” The butler’s concern about Stephanie’s matureness isn’t exactly assuaged by the fact that while they’re talking, she’s doing cartwheels in the background…

There was a nice montage of Stephanie’s training and Tim’s return to civilian life (can’t go wrong with a good training montage). The rest of the book takes a look at her continuing education – the chapter on Zsasz invokes Batman’s No Killing rule, for example.

I hadn’t read anything featuring Stephanie before, but I see now why so many fans are asking for her return in the New 52 titles. She’s a lot of fun: “Mock me at your peril, Masked Man.” 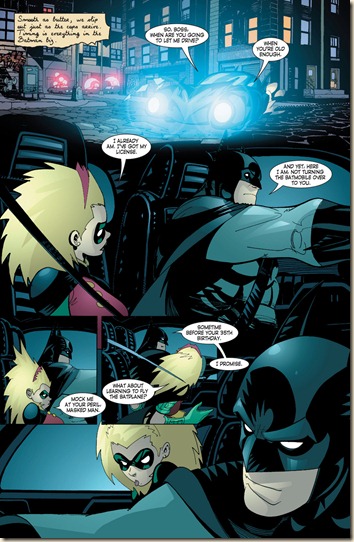 The artwork is great artwork for both storylines. That for the Detective Comic chapters is much darker and gritty, all moody shadows and gloom, but also highly detailed. The Robin chapters are a little more Manga-esque, a more cartoon-like, which matches Stephanie’s spunky attitude and playful nature. For the main, both styles work excellently at improving and enhancing the narrative. There were, however, a couple of moments in the Stephanie Brown chapters, panels in which the style makes her look a little like Sonic the Hedgehog but with boobs: 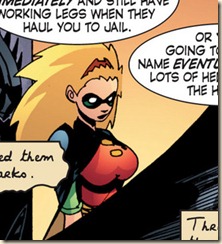 Another chapter, non-Willingham, also features Stephanie Brown, which I thought was also done very well and offers a nice contrast for her portrayal: 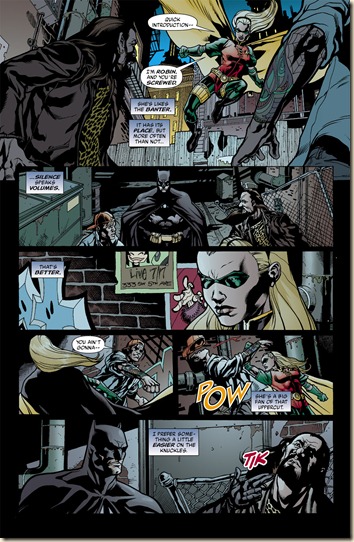 Overall, though, this is a fantastic collection, and I highly recommend it to anyone looking for a longer storyline in the pre-New 52 Batman canon. For me, everything worked perfectly. I can’t wait to get my hands on the three War Games volumes, which directly follow on from this. Expect reviews of those in a couple of months’ time.

[For more on Jason Todd and that Clayface incident, I’d strongly recommend Red Hood: Lost Days and Under the Hood.]