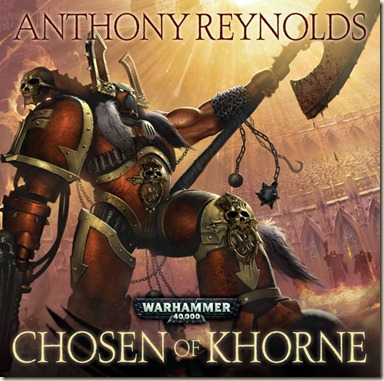 Khârn the Betrayer takes to the field of battle as the champion of his old comrade Argus Brond, but his own motives go far beyond the petty squabbling of rival Chaos warlords... Deep within the Eye of Terror, the followers of the blood god Khorne war amongst themselves to win their patron’s favour, and for the right to lead a new crusade against the Imperium in his name. Argus Brond, berserker champion of the old World Eaters Legion, has called upon his old comrade Khârn for assistance – surely, this legendary warrior will break the deadlock and secure victory for him? But Khârn, known with good reason as ‘the Betrayer’, is far more than just a crazed killer, and his own agenda will always come first...

This was a much better audio-book than the last one I listened to, and mainly on the strength of the acting and narration. The story is very strong, as is the norm for Black Library audiobooks, and all the more so because it features one of my favorite Chaos characters, Kharn the Betrayer. However, unlike some other audio-dramas from this publisher, the delivery was, in my opinion, entirely suited to the story. This is an excellent audio-book.

The story is pretty straight forward, as we join first a seneschal – plodding and universe-weary – as he walks through the World Eaters base to fetch Kharn, who has been called out for a duel. As the synopsis mentions, the bout is for the leadership of a Khornate warband. Things don’t go exactly as they should – which is entirely typical of World Eaters and followers of the Blood God – and we’re treated to an engaging story: one that veers from an introspective examination of the state of the World Eaters, to the visceral breakdown of discipline and wanton bloodshed. Well, really it’s utter anarchy… In other words, it’s pretty cool.

What really stood out for me was the narrator’s delivery. It is understated and almost reflective, which was a nice juxtaposition to the extreme, brutal nature of the World Eaters and other bloodthirsty nutbars who feature in the story. Some of the voice acting was typically over-the-top (the Fleshtearer, for example), but it was not to the same degree as with Perfection. In this respect, Chosen of Khorne is a better audio-book, as the delivery was not  distracting.

We get a particularly great first impression of Khârn, one of my favourite characters in Warhammer 40,000 lore. It’s wonderfully atmospheric, moody and downright sinister. The narration perfectly evoked the fear the seneschal feels. Khârn, typically of the World Eaters, is prone to fantasies of such violence and aggression, which are also evoked well here.

Khârn’s slightly European accent was an interesting choice. Not really sure how that decision was reached… The seneschal is well portrayed and acted, and we really get his sense of resignation at serving a force that is basically built around killing anything and everything, including each other. Some of the other champions were a little over-done, unfortunately. Sound effects are used sparingly, which I definitely liked. The music is subdued and never overbearing. Basically, on a performance level, this works really well.

The story, which is excellent, gives listeners and fans a good glimpse into the state of the gladiatorial, bloodthirsty World Eaters “society” in the 41st millennium; as well as another glimpse into Khârn’s mind. The Khorne-worshipping warriors are barbaric, certainly, but their practices and mores have shades of a heavily-distorted Roman edge.

The best thing about the audio-book, aside from the story of course, was that it really left me wanting more. Luckily, I have Aaron Dembski-Bowden’s latest Horus Heresy novel, Betrayer, which I am already reading (I’m half-way through at the time of writing this, and thoroughly enjoying it – review next Monday).

Chosen of Khorne is certainly a recommended addition for any Chaos and/or Warhammer 40,000 fan’s collection.