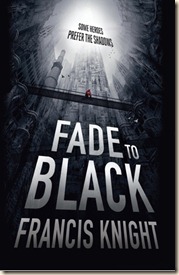 Mahala: a city built in the dark depths of a valley. A city built up in layers, not across – where streets are built upon streets, buildings balance precariously upon buildings. A city that the Ministry rules from its lofty perch at the sunlit summit & where the forsaken lurk in the shadowy depths of the Pit.

Rojan is a bounty hunter trying to make his way in the city. Everyone knows he’s a womaniser, a shirker of all responsibility, but they don’t know he’s also a pain-mage: able to draw magic from his own & other people’s pain. He’s not keen on using it (not least because it’s outlawed), but when his niece is abducted and taken to the dark depths of the Pit, he may just be forced to unleash his power…

Ever since I first saw the artwork for this novel, I’ve been dying to read Fade to Black. I was lucky enough to get an early copy, and damn did it live up to my expectations! Actually, it exceeded them. Given how much I enjoyed this novel, writing a review for it is unlikely to be easy, or do it justice. Part of me wishes to go ahead and write a calm, collected (translation: bit staid) review, while the other just wants to type “ZOMG! This is amazeballs!” and leave it at that. [Incidentally, does anyone know what the “Z” stands for…? Apparently, I am i-leet-arate.]

This is a great fantasy debut, introducing us to an intriguing new character, and the beginning of something really quite brilliant.

The novel drops us right into the middle of Rojan’s job. He’s been hired to retrieve a wayward noble’s daughter, who is also a gifted alchemy student, to return her home in one piece. Knight’s writing made it very easy to fall right into the world, her prose style fluid and inviting. We’re introduced to Rojan’s magic. We also get a sense of how the novel will unfold – Knight only gives us world-building when we need it, but it is by no means clunky. It’s an excellent, quick introduction to our hero and his world.

Rojan’s brother has been attacked, his wife killed and his daughter kidnapped. Through some magical weirdness, Rojan is called to his brother’s hospital bedside, and begged to find out what happened. Through this, we learn more about the city and world, which Rojan must traipse through to get to the hospital.

Before I continue with a little more on the story, I thought I’d pick up on another excellent element of Fade to Black, and that is the fact that Rojan’s brother was attacked with a gun, weapons that are extremely rare and new to Mahala (this put me in mind of Pratchett’s Men At Arms, only not satirical). Rojan speaks with a young doctor, who tells him:

“This is only the third bullet case I’ve ever seen. The others were minor, but the potential for damage – the wounds are nothing like knife or sword wounds and we’re still learning. That bullet might be fine, or it might kill him, and I haven’t a clue which it will be. Whoever invented guns, I just hope Namrat takes the guy’s soul and balls when he dies.”

Rojan’s investigation takes him on a journey to the dark underbelly of the city – both literally and figuratively. For one thing, he must travel down into the ’Pit – in the bowels of the city, it is where citizens have been told the dregs of society are sent, heavily polluted and crime-riven. There was something about the way the city has been constructed – from the social strata to the inclusion of the ’Pit that reminded me of Necromunda, an old Games Workshop tabletop game (and sometime setting for Black Library novels). Knight’s world is more steampunk and fantasy, though. (And actually, much more interesting.)

Life is not at all what Rojan expected down there: it is both better (in terms of food and freedom) and worse (in terms of hygiene and lingering effects of “synth”). Rojan hooks up with two activists in the ’Pit, who say they’ll help him look for his niece, Amarie.

By way of starting their investigation, Pasha and Jake introduce us to the mysterious, horrific human trafficking that takes place in Mahala. Thousands of girls, a few boys, each year, going missing – some disappearing altogether, some reappearing as “employees” of the flesh-shops in the ’Pit. Others are found… discarded. Rojan is shown what happens to those who have been “used up”, and where they end up when they’re done with: “A body can only take so much, then they hand them to the goons to take their pleasure in what’s left.” It’s heartbreaking.

As Rojan becomes more involved in the case, the strain starts to show, as he dodges Ministry operatives who know he’s in the ’Pit and are trying to do everything they can to apprehend him. There are a fair few interesting revelations along the way. Events drive him to loosen his self-control over using magic, and we see the dichotomy of a magic system that requires pain as power. Early in the novel, Dendal, Rojan’s partner and fellow magician, criticises our hero’s approach to his talent:

“At magic, Rojan. You never use it unless you have to, and not the way you were built to use it. You use cheap tricks and toys. You could be so good, if you just believed in it. You were made to use magic, and not just for playing about with.... It’s time to start using it.”

Of course, it doesn’t help that Dendal is addicted to using his magic, and has come perilously close to “the Black”, which will often send mages crazy and insane, or perhaps even kill them outright. Something Rojan is all too aware of, and hyper-sensitive about.

Knight has a real flare for description, and imbues Rojan’s observations with a wry wit and keen eye. Rojan’s perspective helps flesh out the world brilliantly, and while Knight doesn’t over-do the description at any point, I always felt like I have a clear picture in my mind of what was transpiring on the page. For example, upon meeting Pasha, Rojan has the following impression:

“He was a few years younger than me, mid-twenties I guessed, though he still had the gangliness of youth and he looked scared half to death. He was dressed in tatty black, the arms of his old-fashioned cloth shirt pulled down fastidiously to his wrists, every crease in place, all buttons done up. In contrast, his dark, collar-length hair rumpled round a face that managed to give the impression of a small wizened monkey that’s had its banana stolen.”

All of the characters in Fade to Black are great. They are complex, nuanced and also very different from each other. All of them are, as one would hope, of varying shades of grey. It never felt that the characters had just been drawn from Fantasy Central Casting: rather, they all enjoyed minor tweaks and alterations to make them stand out. Pasha and Jake are particularly interesting, and the dynamic between them, not to mention the effect Rojan’s arrival has on them, is both engaging and, ultimately, tragic.

Knight’s writing is excellent, throughout. She writes fluid prose, and the novel is quickly and tightly paced without ever feeling rushed. Each time I picked up the novel, I sank right into the narrative, and was swept along. This is a great debut, from a new voice who is sure to make a splash in the genre.

If you needed a point of reference for comparison, the closest series that Fade to Black reminds me of would be Daniel Polansky’s equally excellent Low Town. The two series have obvious differences, and are by no means identical, but the themes and atmosphere of the two have strong similarities, as does the inclusion of an investigation into a missing girl, and grander conspiracies.

Fade to Black is superb, and raises the benchmark quite high indeed for 2013’s other debut fantasies. Very highly recommended.

Or, as I suggested at the start: “ZOMG! This is amazeballs!” Ahem.

Fade to Black is published by Orbit Books on February 26, 2013 in both the UK and US. The sequel, Before the Fall, will be published in June 2013 in both territories. (So not long to wait for more!)

Posted by Civilian Reader at 8:05 AM