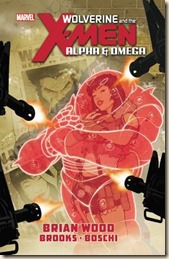 It’s Wolverine versus Kid Omega for dominance of the Jean Grey School. Wolverine will discover that the hardest prison to escape can be his own mind.

I picked this up during one of Comixology’s 99c Marvel Monday sales, and I’m glad I did. I’ve enjoyed the handful of Wolverine & The X-Men issues I read last year, and was interested to see how Brian Wood (author of DMZ, one of my favorite series ever) would approach the characters. Overall, this is a pretty good mini-series.

The story has a pretty intriguing concept, as Quentin Quire, the trouble-maker at the new mutant school, attempts to show everyone just how good he really is; and the imaginative and awesome ways he can utilize his omega-level psychic abilities. Not a lot of people listen to him, of course, because they think he’s a bit of a tool.

Once the staff at the school notice that Wolverine and Armor are missing, however, things get really tricky. Quire’s mental construct, you see, develops its own A.I., and gets away from him (after he accidentally falls asleep). Think of it as Skynet, but in a douchebag’s head. To make things even worse, without Logan’s personality controlling his body, “the Berserker” takes over (I have no idea what the genesis of this personality is, or why it’s separate from Logan). Naturally, the Berserker goes after Quire. 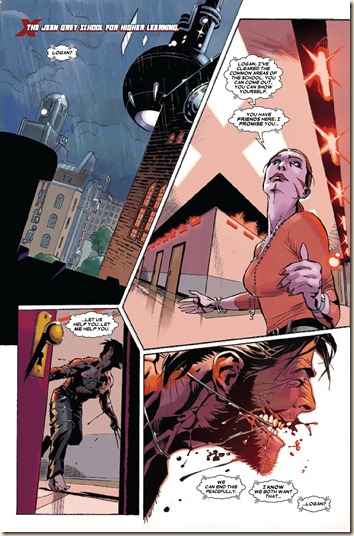 The artwork for these five short issues is strong throughout, but that for the construct scenes and panels is easily the best. It’s sharp and very clear, and at times very dynamic. The “real-time” artwork is a little less pristine, and a little more inconsistent. Here’s one of the best pages from the inside construct: 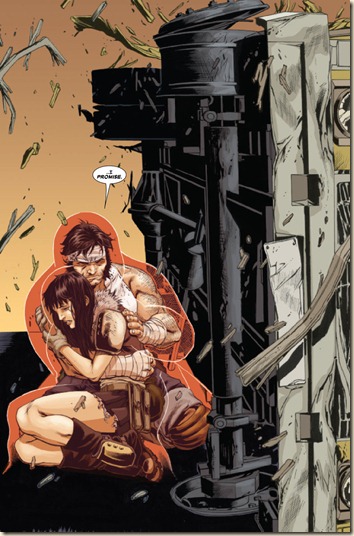 Wood’s writing is great, as I fully expected, and he manages to do quite a lot with relatively little space. I particularly liked the Matrix within the Marvel Universe idea, which Wood and company pull off very well.

Overall, it’s an interesting diversion, certainly, and will be of interest to fans of the ongoing Wolverine & The X-Men series (it appears to be set somewhere around issue #4, I believe). I do not, however, think it’s essential for the main series chronology.

The series is also, sadly, one of the first from Marvel that I think is over-priced in the collected version: the hardcover retails for around $25, which is at least $5 more than the individual issues would have cost. On Comixology, the issues are normally $1.99 each.

So: good, but not essential.