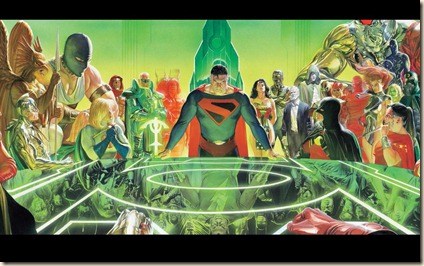 My continued education in the “classic” DC storylines and Events continues. This time, with the Grant Morrison-written Final Crisis and Mark Waid-penned Kingdom Come. As I should have expected, the former contains moments of actual originality and genuine interest and skill, but also a lackluster execution and a fair number of things I really didn’t like. The latter was more of a surprise, as I found it to be a rather intriguing premise, executed in a fashion that left me rather bored. It was a struggle to finish, in fact. 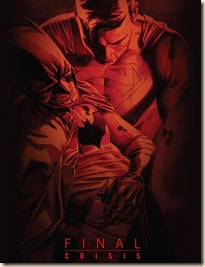 What happens when evil wins? That’s the question Superman, Batman, the Justice League and every being in the DCU have to face when Darkseid and his otherworldly legion of narcissistic followers actually win the war between light and dark.

Featuring the deaths and resurrections of major DC characters, Final Crisis is more than your average multi-part event – it’s a deconstruction of Super Hero comics and a challenging, thought-provoking take on the modern, four-color icons…

The book starts with an alien giving man the knowledge of fire. And our evolution from finding that useful for warmth and cooking, to using it to kill each other. So far, so read before. But the artwork is nice. Then the story jumps to the ‘present’, when a cop finds a superhero in the trash. He is beaten and bruised, and starts mumbling about the need to “Fight!” So far, so very cryptic. Things don’t get much clearer or better from there. To be perfectly honest, most of this book was forgettable. 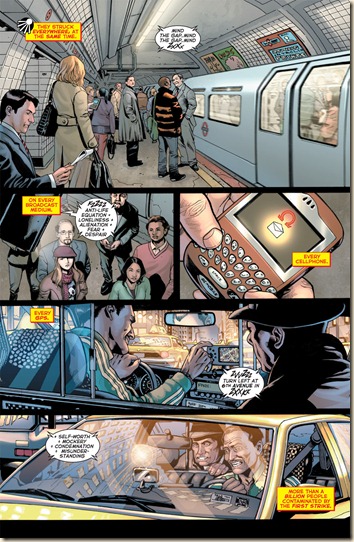 At one point, Superman says the heroes of the DCU must “Pray for a resurrection”, after the death of one of their numbers. A nice, knowing comment, if ever I read one… That was one of the only moments that stood out for me, and it was basically an aside.

One other thing that was interesting, however, was the incarnation of Darkseid, which is a gradual, brutal process. This for me was spoiled only by the gibberish about the “Evil Factory” and the frankly irritating, cartoon-ish minions who fawn and caper around Darkseid. Typical Morrison, in my opinion – something golden ruined by frankly infantile and lazy drapery.

Here’s something that’s been bugging me: Why do Darkseid's optical kill-beams (or whatever they're called) travel in illogical, stupid paths? They’re all over the place. Why not in a straight damned line? 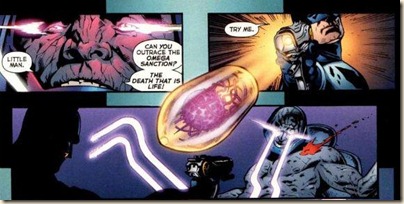 The final chapter is a confusing mess. Mandrakk appears, Superman appears to be keeping miniaturized people in a large fridge, Uotan makes a super-bunny and super-poodle (I shit you not)... It’s a complete deus ex machina, couldn’t-be-bothered-to-do-it-properly ending. As if Morrison knew he could get away with it, so he did.

To be honest, this is not at all essential reading. I didn’t find it at all thought-provoking (as should be obvious from this lackluster review), but it was challenging. To finish… The sad thing is, the artwork’s rather good, but the story fails to support it. 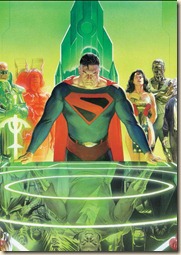 Kingdom Come first burst onto the comics scene in 1996 and almost immediately galvanized fan appreciation with its tale of an emerging struggle between vaunted superheroes and a new breed of amoral, power-hungry vigilantes.

The artwork throughout Kingdom Come is pretty stunning, for the main. I was particularly drawn to the water-color-style. There were, though, more inconsistencies than I would have expected.

The story is set quite far in an alternative DC future. The heroes of old have retired or become more subtle in their tactics. Superman has abandoned his fight for Metropolis and the world, and gone into seclusion. In his absence, and that of the other heroes, a new breed of superheroes has arisen: feeding off the legend of there forebears, if not their morals, they fight amongst themselves endlessly, with absolute abandon and little concern for collateral damage. 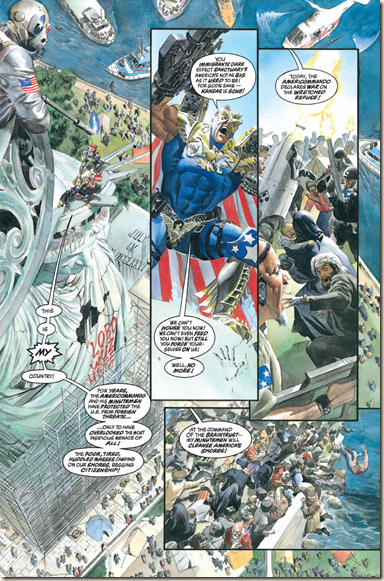 Apparently, it falls to an old preacher and the wraith to help bring this state of affairs to an end. They must bring order back to the world. But, to make things difficult (as one could expect), neither of them can touch or talk to anyone…

Eventually, Superman comes back into service, bringing with him all the other heroes (apparently, despite being noble and devoted to their various causes, they are like sheep when it comes to Superman…). Waid’s Superman in this story is similar to Millar’s in Red Son: he is hell-bent on restoring order, and he’ll do anything to achieve it, including curb people’s freedoms to maintain the peace. So far, so very… blah. Superman creates a gulag for unrepentant metahumans. 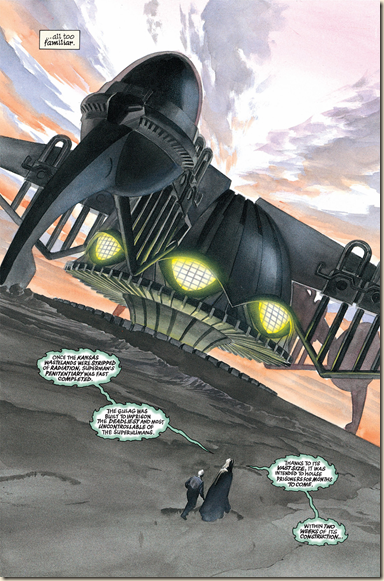 His language is very fascist, which is also not particularly original – “None of you are here for punishment. You’re here for education.” We all know what that means.

The story, sadly, really lost steam towards the end. Each issue is longer than normal, which perhaps threw the pacing off. Sad to say, I wasn’t hooked, despite this being a Mark Waid story, and almost didn’t finish it (with just a handful of pages left over).

Another “classic” story that I found underwhelming. A pity. The artwork is nice, though.