The Winds of Khalakovo, the first novel in Brad Beaulieu’s Lays of Anuskaya fantasy series, was one of the stand-out novels from 2011, for me. It was original, expansive, and excellently written. It was a very find debut. Its sequel, The Straits of Galahesh, is sadly one of this year’s Ones That Got Away – but, as I do own a copy of the book, I will remedy this ASAP (it will be read in 2013!).

Brad recently revealed the artwork on his website, and I thought it would be nice to share it here, too. It’s not the final cover (as you can see, there’s no text), but it’s a great piece of art… 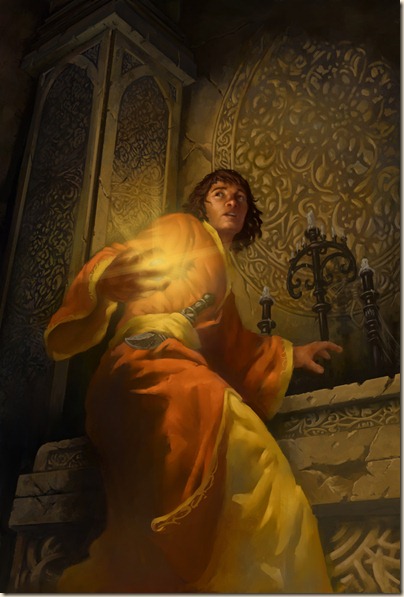 The piece is by Aaron J. Riley. Here’s how Brad explained how the image ties in with the series chronology:

“The illustration is of Nasim. He’s aged a few years from The Straits of Galahesh (he’s about 18 here), and he’s deep in the fabled valley of Shadam Khoreh, invading a crypt where he finds some unexpected things.”

And finally, the synopsis from Brad’s website for this third novel:

The Flames of Shadam Khoreh begins nearly two years after the events of The Straits of Galahesh. In it, Atiana and Nikandr continue their long search for Nasim, which has taken them to the desert wastes of the Gaji, where the fabled valley of Shadam Khoreh lies. But all is not well. War has moved from the islands to the mainland, and the Grand Duchy knows its time may be limited if Yrstanla rallies its forces. And the wasting disease and the rifts grow ever wider, threatening places that once thought themselves safe. The Dukes believe that their only hope may be to treat with the Haelish warriors to the west of Yrstanla, but Nikandr knows that the key is to find Nasim and a lost artifact known as the Atalayina.

Will Nikandr succeed and close the rifts once and for all? The answer lies deep within the Flames of Shadam Khoreh.