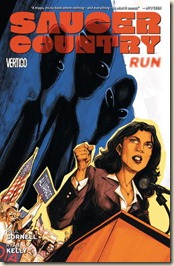 Arcadia Alvarado, the leading Democratic candidate for President of the United States, says she was “abducted by aliens.” As the Mexican-American Governor of New Mexico, she’s dealing with immigration, budget cuts and an alcoholic ex. She’s about to toss her hat into the ring as a candidate for President in the most volatile political climate ever. But then... a lonely road and a nightmarish encounter have left her with terrible, half-glimpsed memories. And now she has to become President. To expose the truth – and maybe, to save the world. With the help of her quirky staff, Arcadia will pursue the truth of her abduction into danger, mystery and awe.

Saucer Country, one of Vertigo’s late-2012 new series, is a brilliant, dark thriller that blends UFO mythology with American political intrigue. The series started shortly before the 2012 Presidential election, which was very nicely timed. Gripping and very well-produced, this is a great read. Saucer Country is one of my favorite new series.

This is a very intriguing series. It’s a slow-burn title, one that sees the story slowly unfold. It would seem that the creative team is in no hurry to tell the whole story, which is just the way I like it. I particularly love the way Cornell’s approached the subject, weaving together multiple strands and theories to create a tricksy new take.

This first issue sees Arcadia getting to grips with both the decision to run for President, and also the weird dreams and flashbacks she’s been experiencing. What do they mean? What is real? Her Chief of Staff, and presumably many others, have been pressing Alvarado to run for president. The time, they tell her, is just right for her: she’s Hispanic, the daughter of illegal immigrants, and has worked her way up from nothing to the Governor’s Mansion of Arizona. It’s true – if she was real, she would be a stirring political story. 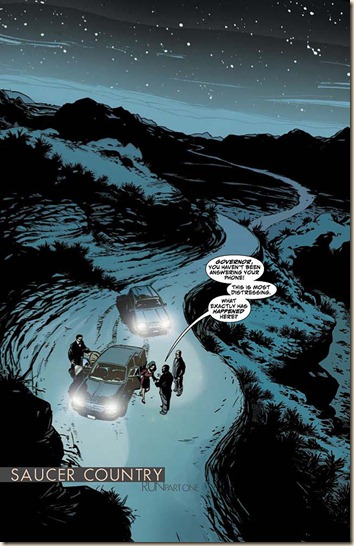 With the help of her eclectic staff – which includes a chief of staff who’s very uncomfortable with the realization that his boss believes she was abducted, and a Republican strategist who’s convinced to stay with a potential book deal – Governor Alvarado insists on pursuing both the presidency and the truth about her abduction.

To get more help with the abduction side of their plans, they call in a recently-disgraced Harvard professor, who has been writing books and papers that suggests he’s too much of a Believer for an Ivy League school to be associated with. Not only that, he’s seeing things… Which is something his former employers weren’t aware of. Alvarado’s ex, who was in the car with her during the abduction, is causing yet more problems for the now-candidate, as he is far less discrete about how he seeks answers. 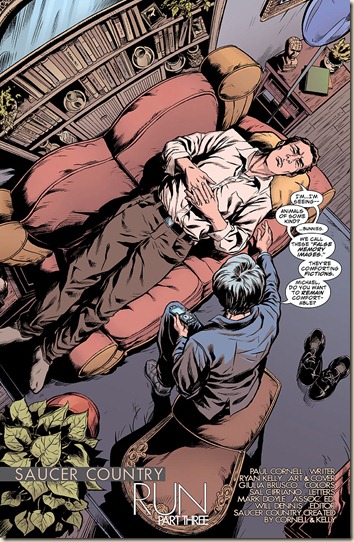 Saucer Country explores the dirty, twisty world of American politics and elections. Only, this time, it’s through the lens of a unique, engaging premise. The story is complete with muckrakers, talk radio hosts looking for a damaging scoop, and shady operators working every angle. And, of course, secrecy. Lots of secrecy. The series also examines a good deal of the various strands of alien mythology and lore – the final chapter of the book, in fact, is a “Field Guide to Flying Saucers” as Kidd describes it. It was a wonderful walk through some of the history and commonalities of the myths that have sprung up in the United States and elsewhere (though mainly the US). 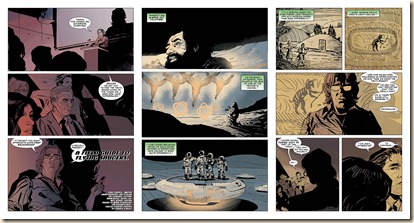 Paul Cornell, who is also writing the excellent Demon Knights for DC, and has recently published London Falling, an urban fantasy novel (Tor), is a fantastic writer. This book ably shows his ability to write thoughtful and addictive comics. Artist Ryan Kelly (New York Five, Northlanders) has done a fantastic job of realizing Cornell’s story, adding so many great touches and details throughout the book. This is also a comic that uses silences better than any other I’ve read – particularly early on, when either others are finding out Arcadia’s supposition that she’s been abducted, or the scenes when she’s asleep, reliving the abduction. It’s really very well done.

Going forward, the series promises to be quite a dark thriller that blends the best and most interesting parts of UFO and abduction lore with today’s charged politics. Saucer Country is very well-written and the artwork is superb. Overall, this is a great comic series, with a fantastic premise, and plenty of potential for the future.

Highly recommended for fans of sci-fi, alien mythology, and comics in general. This is a great example of all three, blended together to create something new and addictive. 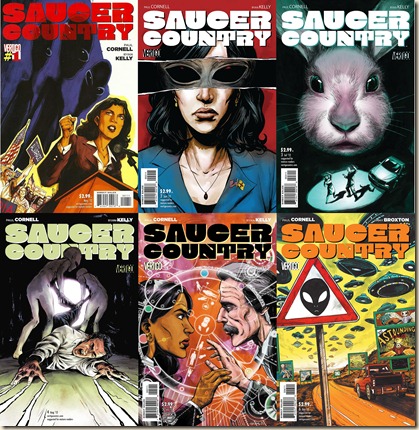