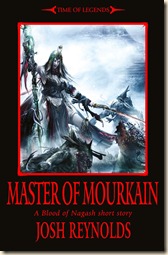 Nagash is dead, but his legacy lives on as the vampire Ushoran embarks upon a quest to retrieve the Great Necromancer’s crown from Kadon, the deadly Master of Mourkain.

Previously printed in the Black Library Games Day Anthology 2012, this is a short story that ties into Reynold’s new Neferata novel, and also the Blood of Nagash trilogy by Mike Lee. It’s a great intro to both Reynolds’s writing and the Warhammer land of the undead. I really enjoyed this, and it whet my appetite for more of Reynolds’s work.

This is, overall, a rather cool short story. It’s very atmospheric, and dark as can be expected from a story involving the undead of any stripe. The first few scenes reminded me a bit of the ancient Egypt portions of Anne Rice’s Vampire Lestat and Queen of the Damned (two novels which, taken together, are one of my favourites – I can’t read one without immediately reading the other, so I consider them one). The story develops into a more violent and contemporary take on the undead, however, after we join Kadon, and Ushoran’s greed takes over.

Reading Master of Mourkain also made me very conscious of how out of touch I have become with regards to the Warhammer Undead – I loved reading the background pages in the Warhammer Armies: Undead book from [year & picture], but despite that I didn’t manage to get around to reading the Time of Legends Nagash series (although I do have the omnibus edition, which is a beast, and will be read at some point). I think Reynolds has managed to tap into the sinister eeriness of the Warhammer Undead very well – they’re not just shambling, flesh-eating zombies, but nor are they the type of vampires to seduce young teenage girls in backwoods towns. They are well-rounded characters, and Reynolds manages to do quite a bit in this relatively short space.

It is a story of greed, death (naturally) and centuries-old ambition. It’s very short, and it’s true that not a whole lot happens, but it works as a great taster for Reynolds’s prose style, and for his take on the undead, and it certainly whet my appetite to read Neferata. It feels like a single scene from a greater story, which is continued (I believe) in Neferata.

Recommended for fans of the Undead, and anyone with a taste for horror fiction. Josh Reynolds is fast becoming one of my favourite new(ish) authors writing for Black Library, and up to this point I’ve only read his shorter fiction. I’ll remedy this with a novel or two in the very near future.

[But before that, I’ll be reading his latest Gotrek & Felix short story, Berthold’s Beard, and then diving into the latest novel in the series, and first written by Josh: Road of Skulls.]

Posted by Civilian Reader at 8:06 AM