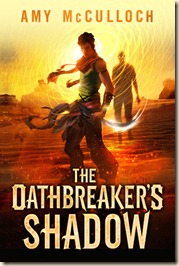 I’ve been looking forward to this novel ever since I spoke to Amy one day last year, and she told me about it. The cover makes it look a little Prince of Persia-esque, but I’m not sure how accurate that assumption would be. The premise certainly sounds pretty intriguing and tantalizing:

Raim has worn a simple knot around his wrist for as long as he can remember. No one knows where it came from, and which promise of his it symbolises, but he barely thinks about it at all — not since becoming the most promising young fighter ever to train for the elite Yun guard. But on the most important day of his life, when he binds his life to his best friend (and future king) Khareh, the string bursts into flames and sears a dark mark into his skin.

With luck, I’ll get a review up here in the not-too-distant future. I’m really looking forward to this.

The Oathbreaker’s Shadow will be released by Random House’s YA imprint in June 2013.