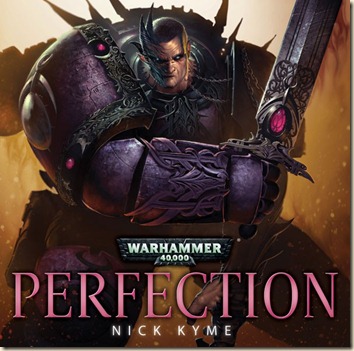 On a world besieged by the forces of Chaos, the Emperor’s Children and the World Eaters are forced into an uneasy alliance when the bodies of the fallen start to go missing… Under siege from Chaos Space Marines of the Emperor’s Children, survival for the world of Vardask looks bleak. Matters worsen with the arrival of the World Eaters of Khorne, but when the Champions of Slaanesh are slowly murdered in mysterious circumstances the enmity of the rival warbands threatens to turn them on one another on a scale not seen since the aftermath of the Horus Heresy. Are there no depths to which the scions of Fulgrim will not stop in pursuit of true perfection?

I’m not going to spend too much time with this review. I really liked the story, as I fully expected to do (Kyme’s a great talent). But, as with many Black Library audiobooks, I struggled to get past some of the accents. Overall, though, if you enjoy other Black Library audiobooks, then the chances are high that you will like this. And the ending… Yeah, Kyme has written a pretty cool, horrifying ending.

The story is pretty straight forward, as it starts: Slaanesh-worshipping traitors from an Emperor’s Children warband are on campaign against an Imperial world. There are also some Khorne worshipping berzerkers on the same campaign, but they don’t really feature. The story opens from the perspective of some rapidly-diminishing Imperial troops, before switching to traitor POVs. We learn that the traitors are in competition with each, boasting about their own prowess and ridiculing their comrades’.

A mysterious killer is picking off our protagonists, one at a time. This stirs plenty of suspicion and mounting paranoia among the traitors – if you build a life around besting each other, preening and promoting your own brilliance, this is inevitable. As events continue to unfold, the warriors’ suspicions must be re-assessed. A Clade assassin is stalking the traitors, but is she the killer, or is there something far more sinister going on?

The denouement is superb, and I didn’t see it coming. What transpires is chilling, adding a pleasant horror element to the story, while also highlighting the debauched degeneracy of the Slaanesh-worshipping Emperor’s Children.

The grisly sound effects were well-done, but the accents for the traitors just didn’t work for me. They came across like thespians trying to Act Evil, which was distracting and even a shade irritating at times. For me, I’ve always imagined Astartes (loyal and traitor) to have slightly more neutral accents and vocal mannerisms. I don’t know where this comes from (perhaps from the Dawn of War games), but given the voices used in this audiobook… I just couldn’t get on board.

Nevertheless, and because I don’t want to end on such a negative note, Perfection is an interesting and ultimately chilling story. The narration is very good, as are the sound effects (one of the deaths sounds particularly… wet), and the action is well written and portrayed.

If you enjoy audiobooks, and Black Library’s in particular, then I would bet you’ll enjoy this.