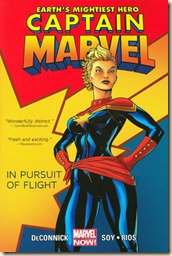 The “Mightiest” of Earth’s Mightiest Heroes is back!

Ace pilot. Legendary Avenger. One hundred percent pure bad-ass. Carol Danvers has a new name, a new mission – and all the power she needs to make her own life a living hell. As the new Captain Marvel, Carol is forging from a challenge from her past! It’s a firefight in the sky as the Banshee Squadron debut – but who are the Prowlers, and where has Carol seen them before? And how does secret NASA training program Mercury 13 fit in?

After spotting a preview of this series, I knew I had to read it. True, I still waited for the collected book, but the artwork for the first four chapters of this book are great. As it happens, the story is great as well. This was a very pleasant surprise, and the story exceeded my already high expectations.

The book kicks off with Captains Marvel and America facing off against Absorption Man, outside the National History Museum in New York. Absorption Man (terrible name, in my opinion) is after some moon rock that he thinks will give him special moon powers. 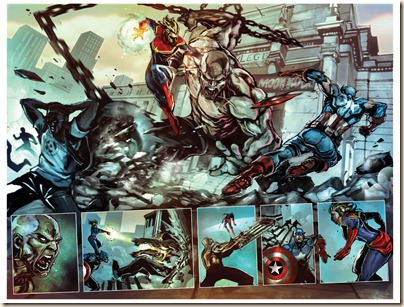 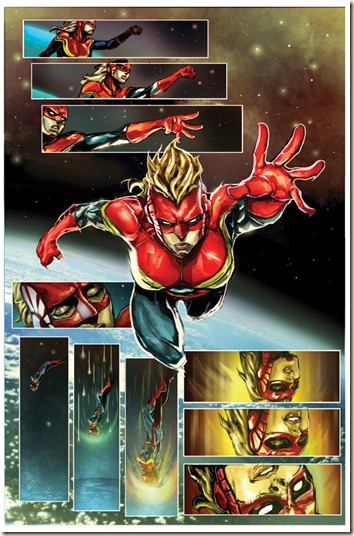 There are two sides to the story: Captain Marvel as super-hero, and also Carol Danvers, woman in a man’s world. She reminisces about her idol, Helen Cobb, a peerless pilot way ahead of her time, who fought the system to allow her and her fellow female pilots to work as test pilots. She has just passed away, which puts Carol in a reflective mood. As she looks after her friend Tracy, who is currently undergoing chemotherapy, she also decides to beat one of Cobb’s greatest records.

To do this, she goes on a flight in Cobb’s plane, in her honor and after her funeral (which is a very touching moment, actually). That’s when things get very strange, and time travel gets involved. Carol ends up on an island off the coast of Peru, under Japanese control. She hooks up with the Banshee Squad, a team of female pilots who also find themselves stranded on the island. What follows is Carol's attempt to get to the bottom of the time-travel, which steps her forward each time, bringing her again into Cobb's orbit (and not necessarily in a good way). 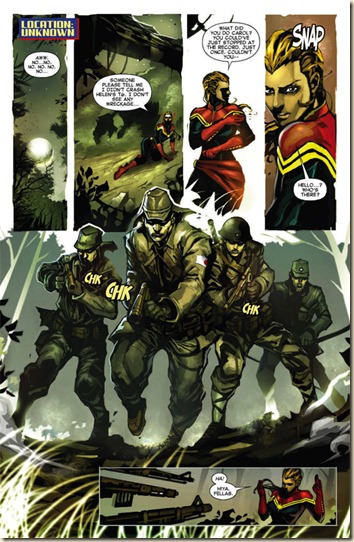 I really like the artwork for chapters #1-4: the painted quality to it is stunning, vivid, and absolutely eye-catching. The style-change for the final two chapters was a bit jarring, unfortunately, and while good in its way (reminiscent of occasional Fables artwork), and is certainly not bad per se, it was not nearly as eye-catching as the first style in my opinion. 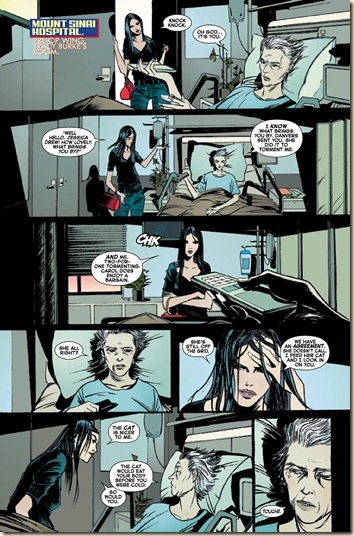 The book includes, as a bonus, a good, long prose-history of Carol Danvers/Captain Marvel, which was certainly interesting for this new reader. The pages fill in some nice blanks and extra color to the Marvel Universe.

Overall, this is a great comic. I look forward to reading more of the series. (And also catching up with Avengers Assemble, so I can start reading DeConnick’s work on that series, too.) 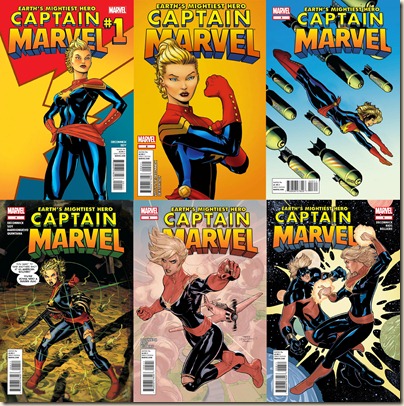 Posted by Civilian Reader at 8:01 AM