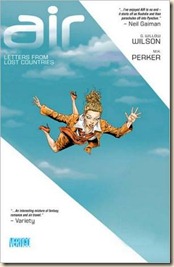 Blythe knew it was a risky time to be an airline stewardess, but the skies might be much more dangerous than anyone imagines. She's just learned of the Etesian Front – vigilantes dedicated to take the skies back from terrorism. They're after a mysterious man she's just met. And whether he's an average frequent flier or a terrorist, finding out will lead Blythe to discover the weird science of hyperpraxis – an innovation that will change the way we see technology forever.

I first became aware of this series when I interviewed G. Willow Wilson a few months back. I was mainly interested in finding out more about Alif the Unseen, Wilson’s latest novel, but she mentioned Air in one of the questions, and I decided to hunt down the first collection for review. My feelings about the book are mixed – there are some great flashes of inspiration and excellence, but I found the narrative and dialogue somewhat disappointing in places.

As I said, there’s a lot of great stuff in here, and the story is built around a great premise and original idea. However, I thought it took altogether too long for things to really start falling into place (chapter 3, specifically). The idea of an inconvenient country being “thought out of existence” is inspired, and I really liked the way it was woven into the story.

The main character, Blythe, was very disappointing. She’s very weird about Zayn, the love interest of the story. First she sees him frequently through her job as a stewardess, finds him infuriating and altogether too-mysterious-to-be-a-good-thing. Then she discovers he’s mixed up in some strange potentially-terrorist plot to steal one of her employer’s planes. A few pages later, she’s sleeping with him after being knocked unconscious for four days from a concussion she received from bailing out of a plane at altitude... Then she becomes, quite frankly, obsessed with him. I found Blythe’s need for Zayn bordering on the obsession Bella feels for Edward in Twilight (at least the movie, which is all I’ve seen – although, talking to people who have read the novels, the analogy holds up). Blythe’s life becomes defined by her need to be with Zayn again. I found this disappointing.

There are some narrative and structural issues with the book, too. At times it felt a little clunky – mainly at the beginning, but it did settle down towards the end. There are some frustrating narrative tropes that run throughout, which are reminiscent of poorly-written TV dramas or sleuth-tales. Also, when there’s a huge huge gunfight on a relatively small rooftop with no cover, I find it extremely difficult to believe that three gunmen can’t shoot a single woman running away from them at about ten feet. Blythe’s dialogue is frequently cliché and grating, and otherwise I found it rather bland, plain.

There are moments of brilliance and originality that really make you think and wonder, and they certainly do stand out, but the issues I’ve just outlined are what stood out most for me. In many ways, this book reminded me of my experiences with Grant Morrison’s work: the ideas and premises can frequently be inspired and original, but the execution is seriously lacking and disappointing.

The artwork is distinctive and great throughout, reminding me of that in DMZ and maybe a little bit of Y The Last Man. There are moments when the perspectives don’t come across as quite right, but these are minor niggles that don’t ruin the visual experience of the comic.

The final page of chapter 4 was certainly interesting, and sets the story on a bit of a new course. In fact, the last couple of chapters suggest a lot of interesting things to come. There are three more books available, already in stores, but I don’t yet know if I’m going to finish reading the series. I might for the sake of completion, but I don’t think I’m in any hurry to finish reading this.

The number of effusive blurbs on the back cover (from a host of comics authors whose work I very much enjoy) just don’t gibe with what I read. I didn’t find this a particularly deep or timely discussion of flight and international border issues for the post-9/11 world. What I found was an interesting new Urban Fantasy-type premise focused on commercial travel rather than the usual tropes of UF in comics. If anything, I wonder if this series is not meant to be read as individual chapters or even four separate books – I think it’s possible this series has been written as if it were a novel, with a far longer lead-time for things to really kick in and for readers to arrive at the meat of the story where we’ll see more of what Wilson is trying to say?

There’s plenty to appeal to a wide host of comics readers, with shades of Lost and perhaps even League of Extraordinary Gentlemen (the latter starting to peak through towards the end of this book). But I can’t say I wholeheartedly recommend it at this point. Which is really disappointing.

I’d be interested to hear what other readers thought of the series, so please do contribute in the comments thread, below.

Posted by Civilian Reader at 5:42 PM