Another round-up of recent reads. I’ve actually been reading a lot more comics/graphic novels than I’ve been reviewing, but I’ve decided to review only the ones I feel really ‘need’ a review. That is, those that inspire particularly strong opinions, or from series that I am particularly fond of already. Others, for example The Walking Dead, have been reviewed plentifully already and my positive reviews wouldn’t really add much to the discussion. But this didn’t stop me from writing something here anyway. 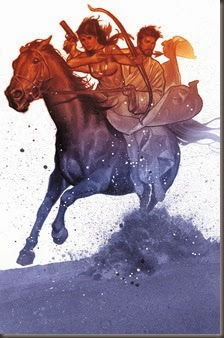 Fairest, Vol.3 – “The Return of the Maharaja” (Vertigo)

When Nalayani seeks the help of the Maharaja to save her village from the Dhole, she uncovers a secret that could change the Fables Universe forever: the still alive and long-thought dead Prince Charming!

I have made it quite clear on the blog that I’m a big fan of Bill Willingham’s Fables series – it is, without a doubt, one of my top five series of all time. Unusually, the spin-off titles have likewise been excellent (the two Cinderella mini-series, the longer-but-now-complete Jack of Fables, and now Fairest). Fairest was actually the first series in the Fables-verse I tried, and have since devoured as much of the rest as I can (thus-far) afford. The first two story-arcs in this series were fantastic, and especially the second written by Lauren Beukes. This third book, while still excellent, suffered from some minor pacing issues. At the same time, I think it relies on a little more existing knowledge of the main Fables series than previous books have. This is no bad thing (although, it did present a number of spoilers for me, having not read beyond the fifth deluxe collection). The alternative location (Indu) was interesting, and allowed for some refreshingly different mythological influences – ones that have appeared before in the main series, but were never as prominent as they are here.

Overall, though, this is another great addition to the growing Fables canon, and one I would strongly recommend to all lovers of fairy tales and fables. 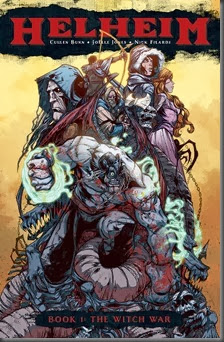 “Once the threshold of Helheim is crossed, not even gods can escape.”

The age of Vikings. Savage wild men, dark creatures, and hideous undead are pawns in the war between witches. A hero named Rikard pays the ultimate price in this conflict... but his fight is far from over. Raised as a draugr – an undead killing machine – Rikard is meant to be used as a weapon in the supernatural conflict. But Rikard will not be controlled. And where the draugr treads, death follows!

Now this is a very cool start to a new spin on Viking mythology. I don’t want to get too much into the story, as it’s fast-paced and the game is always evolving and moving forward. If you are a fan of Vikings, supernatural horror, great comic art, and solid story-telling, then this is a must. The artwork is superb – Joëlle Jones has a real talent for this genre, and draws some amazing, sometimes-gribbly combat and horror scenes. Witches, demons, the undead, Draugr, and plenty of Viking action. Great fun. 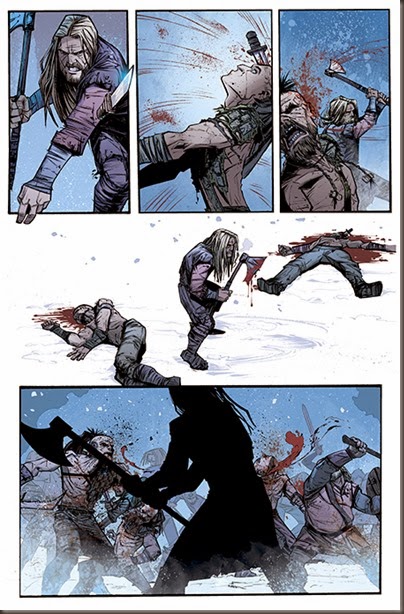 The end of the book leaves plenty of room for more stories in this setting, of which I hope there are many on the way! 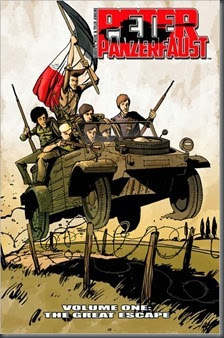 A coming of age tale told through the eyes of a group of French orphans during World War 2 who are saved by a brave and daring American boy named Peter. As they travel together, they get tangled up in the French Resistance in Paris, fighting a growing German presence under the leadership of a fanatical SS officer hell bent on wiping them out! Using the Peter Pan story as a touchstone, Peter Panzerfaust reinvents familiar character and plot elements in a unique and creative way.

I picked this up on a whim. I’d seen the writer’s name attached to a couple of new, very intriguing series, and decided to try out this book. I’m a big fan of the Peter Pan story (the movie Hook was a surprisingly large part of my childhood… I think I’ve seen it about six times), and this is a particularly interesting, well-crafted adaptation. Although, really, it’s more of a strong homage than adaptation. There are obvious parallels, but Wiebe has really managed to create something pretty original. The story is very well plotted, moving at a brisk-but-unhurried pace, and the characters experience both the highs and lows of living during a war. It was quite moving at times, too. The artwork is pretty interesting, too, with a rather distinctive aesthetic – the characters are slightly otherworldly and waifish, even impish, at times, but it is never a distraction or visually jarring.

Overall, this is a really interesting start to a quirky, recommended series. I can’t wait to read the next volume.

Dying young, a brilliant Mathematician enters the afterlife and discovers a way to cheat the terrifying Divine Calculator. He schemes to be endlessly reincarnated within the lifespan of the woman he loves, no matter how often the violent bailiffs of the Karmic Accountancy cut-short each life. It falls to one such agent – the surly Bastard Zane – to put a stop to the time-twisting romance!

From the brilliant mind of Simon Spurrier comes this new, bizarre story. It is part love-story, part resurrection myth, thriller and also whodunnit. It’s also a bitch to review: there are so many twists and turns, that to spend really any time talking/writing about it would rob these surprises of all their power. I knew basically nothing when I read it, and as a result this was a very fresh story. It builds very nicely over the course of the four issues (which also include a number of interesting extras), and I had no idea how it was going to end. A really pleasant surprise, this only raised my admiration for Spurrier’s creative talents. 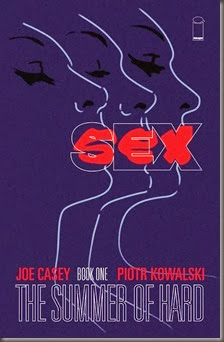 Retired superhero Simon Cooke has returned to Saturn City to live life as a “normal” civilian. Easier said than done!

This is a tricky one to review. If I’d been reading Sex issue-by-issue, just once a month, I may not have got past the second instalment. It took too long to start, really. At the end of this collection (eight issues), it still felt like the story had some way to go before the depth was properly explored (no double entendre intended).

The motivations and psychologies of the characters are only just starting to take shape and make sense (there have been a few jumps, obfuscations, etc.). Simon Cooke actually feels a little flat – we’re basically told he’s having difficulty with his re-assimilation into “normal” life (he’s a billionaire a la Bruce Wayne, in a city starkly divided along socio-economic lines – how “normal” can his life be?). He only started becoming interesting right near the very end of the book. Some of the characters who enter his orbit have a lot of potential, though. Maybe the second book will cement things into their proper places, but I do worry that’s too late for readers to wait or commit to.

At the same time, the story is not, in many ways, what I was expecting. This is both good and bad. I had hoped for something in the vein of a less-ugly version of The Boys, exploring the idea of superheroes in their “down-time” or after their retirement, but minus the… I don’t know, skeezy quality? Instead... We basically only get a prologue to something maybe bigger. In many ways, “Sex” is a bad title – attention-grabbing, certainly, and descriptive of some of the content (which does venture into the psycho-sexual, and/or graphic territory), but the main character, Cooke, is pretty much a complete prude. Anyone who’s looking for just a smutty comic will come away disappointed, and anyone who’s hoping for more nuance (like me), will likewise come away feeling a little dissatisfied. It has the beginnings of something pretty interesting, but maybe the expectation of making this a “naughty funny book” eclipsed the storytelling that should have been the priority?

Overall, then, this is probably going to shape up in an interesting way, but the pacing as a monthly comic will likely disappoint many, and will probably lose readers along the way. A pity. This had potential. 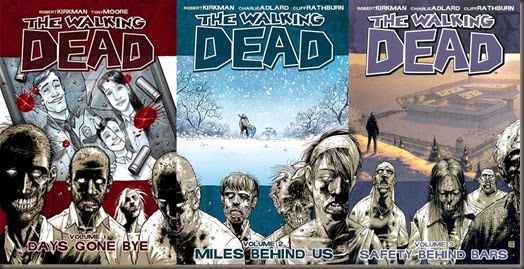 The world we knew is gone. The world of commerce and frivolous necessity has been replaced by a world of survival and responsibility. An epidemic of apocalyptic proportions has swept the globe, causing the dead to rise and feed on the living. In a matter of months society has crumbled: no government, no grocery stores, no mail delivery, no cable TV. In a world ruled by the dead, the survivors are forced to finally start living.

What is there, really, left to say about The Walking Dead that hasn’t been said already? It’s a phenomenon all by itself. The premise is great – what happens after the apocalypse? Kirkman has been on the record stating that he imagined this series going on indefinitely, because he was dissatisfied with zombie movies’ and fiction’s tendency to just end. The series has now hit its 18th collection, I believe, so I still have a lot of catching up to do.

I’d seen the first series of the AMC TV show (and really enjoyed it), but never really felt much interest in reading the comic series that spawned it – despite my newfound interest in comics in general. As has been so often the case in the past couple of years, following a sale on ComiXology, I gave the first couple of collections a try, and was damn-near hooked! I have a fondness for post-apocalyptic stories and series (probably for exactly the clichéd or textbook reason most people like them), and this is a pretty great one.

It’s interesting how the story has unfolded over these six books: characters have come and gone (often brutally), but it is not always at the jaws of a zombie (or horde thereof). Kirkman and Co. have focused on the survivors, how they cope – or not – with the new reality they find themselves in. There are plenty of shocking moments, often rendered in arresting full-page pieces. The black-and-white artwork suits the story and mood, too, and there’s plenty of great use of shadows and darkness from which the zombies do lurch and grab.

I do sometimes wonder how on earth they’re going to keep this going and interesting over the course of such a long series. But, I’m certainly interested in finding out – not to mention also catching up with the TV series, which has diverged quite a bit from the series, I hear (from a Rolling Stone cover story). On the strength of these six books, though, I would say the series absolutely deserves the success it has enjoyed. Definitely recommended. 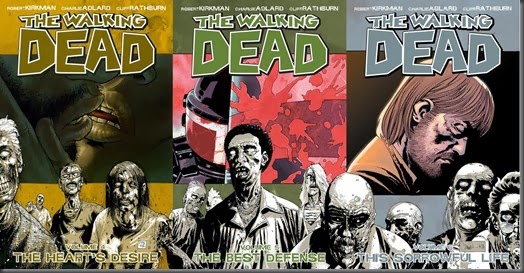