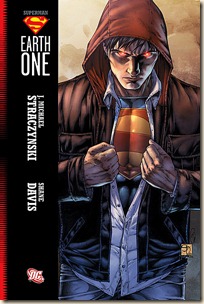 Forget everything you know about The Man of Steel and brace yourself for a staggering new take on the world’s most popular Super Hero. What would happen if the origin of The Man of Tomorrow were introduced today for the very first time? Return to Smallville and experience the journey of Earth’s favourite adopted son as he grows from boy to Superman like you’ve never seen before!

This is the second Superman graphic novel I’ve read (after the thoroughly underwhelming All-Star Superman Part 1). Superman: Earth One is set in an all-new continuity apart from the pre-New 52. It takes us right to the beginning of Clark’s experiences in Metropolis. To be perfectly honest, this is what I’ve always thought Superman comics and graphic novels should be. The quality of the writing and artwork, the accessibility for people not steeped in the extended weirdness canon that became the Superman world… This is superb. 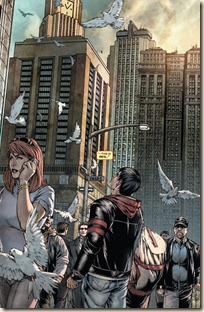 Clark is trying to decide on how he wants to live his life, what career he wants to pursue (and he tries a whole bunch of them in this book – from science, to pro-football, to, of course, journalism). We get a really engaging look at a vulnerable Clark Kent – he is going through the identity crisis that so many teenagers and early-20s experience, only with an extra, inescapable burden. He is not sure if he wants to be Superman, or if he wants to attempt to live a ‘normal’ life. We see him struggling with the decision – in the ‘present’ and through flashbacks to when he was back in Smallville. Jonathan Kent has passed away, and one of the most touching scenes is when Clark revisits the grave. To Straczynski’s credit, he manages to completely avoid making Clark come across as overly-angsty or ‘emo’. I thought the balance was perfect.

The state of journalism today is perhaps a larger theme in Superman comics than I originally thought (it features in the New 52 Superman series, too). I really liked the minor commentary on the profession, especially that which cropped up 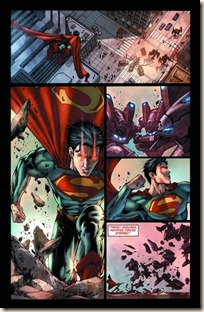 when Clark’s trying out for a job at the Daily Planet. In particular, Perry White’s criticisms of Lois Lane’s most recent piece: it’s the first time we meet her, and White’s critique is superb and conforms to my own criticisms of many contemporary journalists. All I can hope is that real or aspiring journalists will read this and take the lesson to heart. If you think this is an outlandish wish, I should point out that there is a precedent for this: respected British journalist John Humphreys caught the journalism bug as a result of his fondness for Superman. [A friend interviewed him while we were at Journalism School.]

Davis’s artwork is absolutely superb, and some of the most vivid and striking I’ve seen in any comic or even adorning any comic cover. It’s similar to Lee Bermejo’s style (see Batman Noel), only with a less-gothic aesthetic, reflecting the traditional, brighter Superman palette. It makes this a stunning graphic novel. Straczynski’s writing and story are great, and he gives Clark a solid character-arc, as events force him to come to terms with the reality of his situation and his abilities, and what he can accomplish with them. It’s not rushed, but neither does it feel drawn out.

This is a fantastic re-imagining of Clark’s arrival in Metropolis, and his journey to becoming Superman. If you have any interest in the character, then this is a must-read. I will judge all future Superman reads in comparison to this book. I’m extremely glad there’s going to be a second volume later this year. 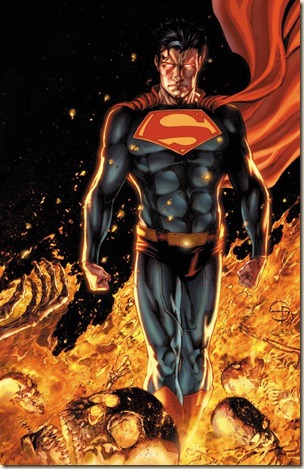 Posted by Civilian Reader at 4:07 PM