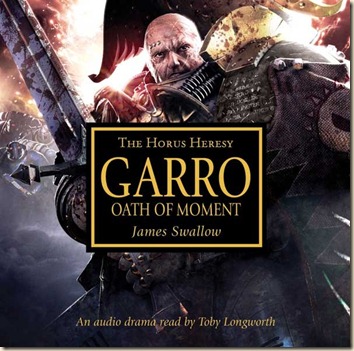 In surviving the horrors on board the Eisenstein, Nathaniel Garro proved his courage and absolute loyalty to the Emperor.

On his return to Terra, Garro is despatched on a mission of even greater importance – a mission given to him by Malcador the Sigillite himself. He soon finds himself back amongst the stars and on the fields of battle, thrust into a warzone where the Ultramarines are purported to be battling a greenskin invasion.

Once again Garro must fight for survival, but now he also fights to achieve a higher purpose...

Read by Toby Longworth, this is the first of three audiobooks focusing on former Death Guard Nathaniel Garro, who we last saw in Flight of the Eisenstein. I must admit that I’ve not been the biggest fan of the medium (I struggled to get into audiobooks in the past), so I came in without too high expectations. Given the chronology of this story – the battle of Calth, roughly the same time (or near enough) as Know No Fear – I was interested to finally get around to it. And it’s actually a pretty good audiobook, and perfect for those times when you aren’t able to read, but want some sci-fi fiction.

Malcador sends Garro out into the stars, in search of a specific selection of Astartes – all loyalist, but not all necessarily from traitor legions, like himself. To begin with, he is sent to Calth to recruit Tylos Rubio, an Ultramarine former-Codicier. Since the Council of Nikaea, psykers have been prohibited from using their powers. This is causing its own psychological strain on Rubio and other psykers among the Legions.

The story jumps around a bit, dropping us straight into some action during the Word Bearers’ surprise attack on the Ultramarines. We then follow Garro as he connects with the 21st Company, and joins them in their task of defending an approach to Numinus, Calth’s capital city. The story jumps back a couple of times to Garro’s confrontational briefing with Malcador. It’s pretty good stuff, actually. I liked that we’re getting a little more of the picture, away from the battle-front put in place, although not at the expense of action and combat.

So that’s the story. What’s the performance like? Well, it’s pretty good. Having said that, though, this does suffer from the expected shortcomings of audiobooks that I find with every single one I’ve ever listened to – and that’s just that the performer’s interpretation of a couple of things are very different to my own, and that makes it tricky. This is especially the case with regards to voices.

For example, the voices of the Astartes are a little off, in my opinion – a bit constipated at times (Gaius in particular). All except Rubio and Garro. Ollan is oddly French. Malcador sounds like the Emperor from Star Wars. Was waiting for him to say, “Strike Horus down, and your training will be complete!” A bit like Darth Yoda...

The musical soundtrack can sometimes take things from audio drama to rather close to audio melodrama. It’s not a terrible thing, though, it was just noticeable that some of the musical interludes were almost Wagnerian in their bombast. Come to think of it, though, given the scope, I can’t help thinking that if Wagner had ever conceived of a sci-fi future of eternal war, he may have thought up something like Warhammer 40k…

It’s a little unclear to me if this is the birth of the Inquisition or Grey Knights, or possibly both. Perhaps it’s even the start of the Death Watch? So many possibilities, I really like that they haven’t just spelled everything out for us.

Would I prefer to read more of Garro’s exploits and missions? Sure. But, with that not yet an option, I’m happy with at least getting more about him and his post-Eisenstein career in this format. If you’re looking for more of the Horus Heresy story, but don’t want to read it (for whatever reason – I, for example, listened to this while at the gym), then this will probably be perfect for you.

Garro Series: Flight of the Eisenstein, Oath of Moment, Legion of One [review forthcoming], Sword of Truth (Dec.2012)

Here’s an advance look at the striking cover art for Sword of Truth, by Neil Roberts: 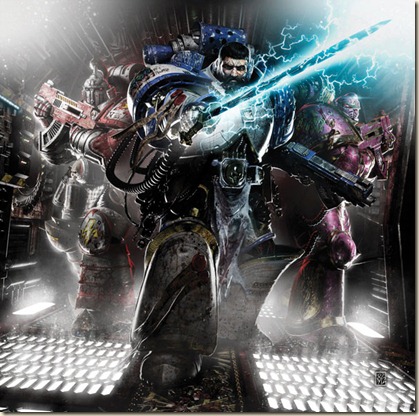 Posted by Civilian Reader at 5:00 AM