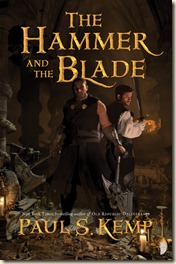 The start of a great new Sword & Sorcery series

Retire to a life of luxury.

Unfortunately for Egil and Nix, when the demon they kill has friends in high places, retirement is not an option.

Before reading this novel, I was only familiar with Kemp’s Star Wars fiction, and so was very much looking forward to reading what he could accomplish in this genre. Luckily, the novel exceeded my high expectations. It is a dark, action-packed adventure sure to appeal to fans of sword and sorcery. I really enjoyed this.

The novel opens with some fun tomb-robbery, which is a nice way to introduce us to our two heroes, Egil and Nix, as well as a great indication of the tone of the novel. Egil, the hammer-wielding warrior priest, is the steady rock of the pair. While sensible and focused, he is ever-ready to back Nix up and fight for what he believes is right and just. Nix is the sneakier, mouthy rogue with an almost masochistic tendency towards sassing people who have either trussed him up or are pointing weapons at him. Nix is also far more complex than he acts – he hides a lot of himself from others.

The novel is written in varying third-person limited perspectives, but Nix seems to receive the bulk of the attention. The rapport between Egil and Nix is very well-done – their banter and interactions speak of a long-standing acquaintance and deep friendship (not unlike Hadrian and Royce in Michael Sullivans Riyria Revelations) that is realistic, occasionally heart-warming, and often humorous. They’re great characters.

At the start of the novel, our protagonists are tired of thieving and tomb-robbing, having amassed plenty of money to retire quite comfortably. They are on their ‘final’ adventure, apparently because they just want something to do and robbing tombs is what they’re good at. Upon their return to Dur Follin, a grungy and hard-scrabble city, they decide to buy their favourite watering-hole, which also happens to be a brothel. Almost immediately, they get into trouble with the madam and some customers.

The demon Nix and Egil kill in the opening sequence has friends in high places. The demon is part of House Thyss, that has a generations-old pact with the noble House of Norisstru, which turns out to have some horrific clauses concerning Norisstru women. With the death of the demon, the arrangement is endangered, the current head of House Norisstru, Rakon, must do everything in his power to ensure the pact holds. Unfortunately, due to Egil and Nix’s antics, this is going to be extremely difficult. They are, therefore, dragooned into helping Rakon solve his problem, with little regard for their utter lack of interest in doing so.

Kemp’s prose style is very good. For the main, it is stripped down and brisk, and the story rattles along at a fair clip. There are occasional moments of purple prose, but they’re forgivable as they suit the style of the story. There’s action aplenty, of many varieties, and Kemp manages to make each violent encounter feel new and fresh. What Kemp’s done with demons and beasties, not to mention this world’s magic system, is original and imaginative, and helps the novel stand-out even more.

Kemp manages the tension and action expertly, while also allowing room for a lot of character development. All of the characters feel believable, and while a lot of them may at first appear to be of a standard sword-and-sorcery cast, they have quirks and eccentricities that set them apart from many of the more cliché character types.

Merelda and Rusilla, Rakon’s sisters, despite spending most of the novel drugged, are central to the plot. On a number of occasions, they attempt to influence the actions of those around them, hoping to avoid fulfilling their predetermined role in the demonic pact. In the final chapter, the villain of the piece meets such a horrific if also oh-so-deserved fate. This must be the most sinister and twisted comeuppance I’ve ever read. Quite (evil) genius. The end of the novel also poses some interesting questions regarding the actual role of the sisters, particularly Rusilla, in the events of the story.

The Hammer and the Blade is a fast-paced sword-and-sorcery adventure, action-packed and dark, with some great interpretations of classic fantasy tropes and themes. I really hope there are more novels featuring Egil and Nix in the future.

Highly recommended if you like your sword and sorcery no-holds-barred, dark, action-packed and with an insouciant sense of humour.