In this catch-up post, I cover issues four to six of All-Star Western, Grifter and Suicide Squad. All three of these were late-additions to my pull-list, but I’ve come to really enjoy them. Dark, twisted, and very distinctive, they each have a lot going for them. 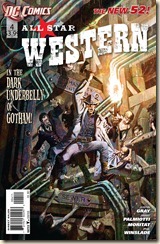 #4 – The trail of a missing child from a wealthy family leads Jonah Hex and Amadeus Arkham into the watery catacombs of Gotham City’s still-under-construction sewer system – but will they survive the many dangers that lurk in those twisty depths? Also: introducing the Barbary Ghost, a fireworks wielding mistress of vengeance, stalking San Francisco’s criminal underworld.

#5 – Slippery sewer pipes make a brutal place for a fight – but that won’t stop Jonah Hex and Amadeus Arkham from facing off against a gang of kidnappers beneath Gotham City. And when the thugs get the best of them, Hex and Arkham find themselves swept away to a pitch-black cave with seemingly no way out – and lots of bats! Will they find a way to escape Gotham City’s dark underbelly before Hex’s matches are all burned out? Also: For the Barbary Ghost, death is only the beginning of her plan for revenge!

#6 – Jonah Hex fights a giant bat to the death! But even with his winged foe slain, will he and Amadeus Arkham survive being trapped in a cave with the lost tribe of Miagani Indians? Hex and Arkham must enlist help – including some familiar faces and some surprising saviors – if they’re going to make it out of this death trap and bring justice to the enslaver of Gotham’s underprivileged children. Plus: The Barbary Ghost proves that a girl can be a gang boss’s worst nightmare when she has vengeance on her mind. 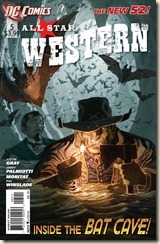 Jonah Hex and Dr Arkham reunite for a case about a growing number of lost children that are being abducted from the poorer neighbourhoods of Gotham City. They venture into the new sewer-system in an attempt to find out who’s taking them and why. They are caught by those they are investigating, and Hex and Arkham are forced to fight for their lives, deep beneath the city. We are introduced to forgotten killer (possibly cannibalistic) tribes living under the city, exceptionally huge bats, and eventually learn the truth of the child abduction ring. Dr Arkham is an interesting foil for Hex – they are completely different to each other, and Hex’s cold-hearted approach to the investigation is quickly at odds with Arkham’s more pampered sensibilities. Especially when he starts freaking out. The storyline’s brought to a satisfying close, too – it’s a very simple, good detective story, and I look forward to seeing where the series goes in the future. 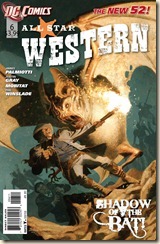 The back-up story across these three issues takes us to San Francisco, and the Chinese criminal underworld of the late 1870s (a period of history that is of particular interest to me, in case anyone was wondering). It’s a very good one, too, and far better than the first back-up story (which I just found annoying). It’s a great story of revenge and a battle against corrupt authorities.

The artwork of the main story remains really gritty and of the distinctive Moritat style. It’s difficult not to describe it in words that may come across as derogatory – it’s not crisp, it’s rough and utilises a muddy palette. But... It’s perfect for the tone and content of the story. I can’t imagine this series in any other style anymore, and I’m definitely coming around to this style of artwork. I don’t want it to become the norm across all or even a majority of titles, but it really works in this instance. The artwork for the back-up story has an almost vintage/classic feel to it, and again really suited the story.

All-Star Western continues to entertain, and remains engaging and intriguing. Recommended if you want something with a dark, Wild Western flavour. 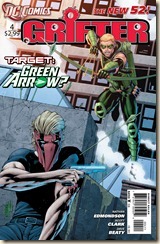 #4 – Seattle is known for coffee, clouds, and Q-Core. Grifter’s struggle has led him to the headquarters of a hero, but not without a few surprises along the way. Just when the gun-wielding con man thinks he’s gotten the upper hand in his situation, he realizes he’s put himself in the center of the bull's-eye! Guest-starring Green Arrow!

#5 – Cole and his new partner Sofia make plans to escape the northwest, but first they need a little cash – and that calls for a quick grift. Cole can’t get far in his con-artistry, however, before discovering that the Daemonites are coming after him in full force – and they have powers he could not have anticipated.

#6 – Grifter is way out of his element when The Daemonites hold him on a hovering spaceship where no man can get to him. Fortunately, Sofia is no man – but will she arrive before a horrific alien ceremony centering on the super-powerful Black Curate has gone too far? Cole Cash will find someone he never expected to see again, he will discover how integral he is to the Daemonite’s master plan, and uncover clues that will bring him face to face with Stormwatch and Voodoo. 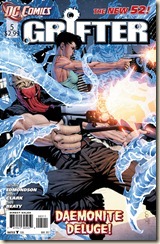 Grifter and a daemonite captive bust into Q-Corp, the offices of Oliver Queen, aka Green Arrow. The two heroes confront each other, the Arrow unwilling to let Cole kill his captive or put anyone else at risk. Things aren’t going too well for Grifter, but he gets a last-minute save from an unexpected quarter. There’s not too much forward movement for the plot, but tons of very cool action (the bulk of the issue, in fact). Part of me wonders if this was just an attempt to create/write yet another cross-over to increase interest in Green Arrow, a series that has been rather disappointing (although, it did seem to be improving before nevertheless I dropped it after the fourth issue).

Issue #5 ups the ante, as the daemonites come after Grifter in greater numbers, forcing a showdown in the open. His new ally, tooled up and ready for a fight, is told to stay home, but of course she doesn’t. There’s plenty of action and violence in this issue, as Cole battles with the daemonites. In the end, with the battle taking altogether too long, a higher authority steps in, and things quickly don’t go as Cole planned, and his partner isn’t quick enough to help him. 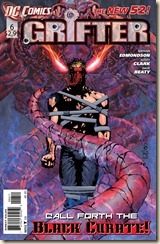 In the final issue of this story-arc, we get a pretty good ending, although not a whole lot of closure. It’s clear that things are only just beginning for Cole and his new ally, and that means there’s plenty of potential in the series.

The whole series has great visuals, pacing and dialogue. The writing and art are top quality, and complement each other very well. The artwork is really eye-catching: very colourful, dynamic and stylised. Some of it appeared to be semi-computer-generated which was a little strange, though. Overall, it’s a rather cool and interesting title, and one that definitely exceeded my cautious expectations.

Apparently this issue ties in with two other series? I didn’t get that at all – admittedly, I’ve got issues one-through-six of Stormwatch, but haven’t read them yet (I’ll do a single all-in-one review for them), and haven’t read any of Voodoo (it received too many negative or neutral-leaning-indifferent reviews for me to put it on the pull-list – maybe I’ll check out the collected edition, when it comes out later this year). It’ll be interesting to see how it ties into the other two series, though. 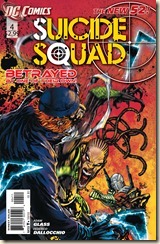 #4 – The body count rises! Another Squad member falls – but not the way you might expect! Betrayal follows betrayal as Captain Boomerang joins the Squad in a smash-and-grab against the terrorist organization Kobra, and Harley Quinn shows why you should never, ever recruit Squad members from Arkham Asylum. Brace yourself for a last-page shocker the likes of which the Squad has never faced before!

#6 – “The Hunt for Harley Quinn”: After causing a prison riot and escaping an ‘escape-proof’ super-villain penitentiary, the maniacal Harley Quinn is on the loose! The race is on as Deadshot – leading an all-new Suicide Squad – tracks his former teammate as Harley hunts the love of her life: the Joker. Plus: Don’t miss the unofficial crossover with STORMWATCH #6, tying into the explosive events of that issue! 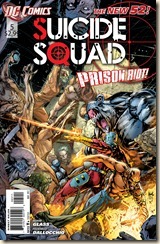 In the fourth issue, the Suicide Squad are sent to infiltrate the base of the Coil, a weird lizard/serpent cult with hi-tech weapons (got a moment of G.I.Joe: Cobra whiplash, there, while reading the description of the cult – the synopsis labels it “Kobra”, which only enhanced the brief sense of de ja vu). It’s a good, interesting issue. All appears to be going well, until Deadshot takes over the leadership role and the appointed leader, Boomerang, gets caught in the middle. All hell breaks loose. And at the end, Harley Quinn finally learns of what happened to the Joker’s, and his possible death, in Detective Comics #1 (which remains one of the most shocking final-pages I’ve ever seen).

Still in holding after their previous mission, issue #5 presents the Squad with an entirely different kind of mission: they have to put down a super-villain prison riot! Many of the inmates know them as fellow inmates, but that doesn’t engender any fuzzy feelings among them at all. With another team member death, it’s up to Deadshot and Diablo (one of the most interesting characters in this series) to put down the violence before the timers on their implant-bombs zero out. It’s bloody, it’s vicious, and it’s action-packed. In other words, it’s awesome. 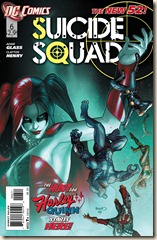 In the sixth issue, a new storyline begins, and the hunt for Harley Quinn is on. This is a very interesting story and issue. We are shown Harley’s first meeting with the Joker, and start to learn more about her background, motivations, and how she came to connect with the giggle psychopath. In the meantime, Deadshot has a new Squad, and he’s sent to bring her in, dead or alive. Being the trickster she is, Harley doesn’t make it easy on her former team mates. I really enjoyed this issue, and think it’s definitely one of the strongest so far.

The series is rendered in very good artwork. It’s vivid and eye-catching (almost garish in some instances), but also gritty and highly detailed. This is a great, twisted series, and it’s not difficult to see why I still consider this among my favourites. Recommended.