A smaller selection of comics all ’round this week (in this and the upcoming second round-up), with just four that caught my attention. They are, however, from three series I am particularly fond of, so that’s a good thing. I’ve also started writing shorter reviews, now that the series are becoming more established and I don’t want to offer up too many spoilers. 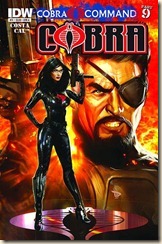 This is it – the final battle as the Joes struggle to survive. Everything changes here! Who lives, who dies, who wins? The answers aren’t what you expect, and the foundation for the future of G.I. Joe starts here.

So this cross-series event comes to a final close. The Baroness has been conducting Cobra Commander’s Cobra Council purge while the world watches the ever-more-grim events in Nanzhao unfold. However, a lone G.I.Joe operative, Ronin, has caught up with her at the final Council member’s home. In the meantime, the members of Cobra’s paramilitary forces are starting to fracture and do what they do best: back-stab each other. Things get messed up.

The writing remains strong and streamlined, and the artwork is pleasantly gritty and suitable. I just wish I knew a little bit more about what was going on.

While this may be the end of the “Cobra Command” story, there will be one more instalment in each G.I.Joe-related series, under the banner “Cobra Command: Aftermath”. This is a good thing, as this issue didn’t exactly finish on a strong note. It was a nice final scene, sure, but there was no real closure or revelations about Cobra Commander’s agenda or even ultimate goal. I assume the three series will continue after the “Aftermath” storyline is complete, but at the moment I couldn’t guess where they’ll be going. 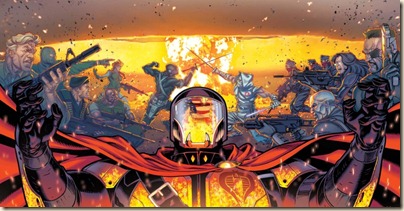 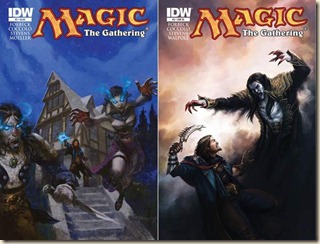 After last issue’s fierce battle against a group of Innistrad vampires, Dack Fayden has found a new ally: young cathar Ingrid Reichert. With her help, Dack continues to track down the person who devastated his hometown. But when Dack stumbles into another vampire attack, even Ingrid’s help may not be enough to get them out alive...

This is the penultimate issue in this first Magic: The Gathering series by Forbeck (he’s been contracted to do another, thankfully). It is a good issue: we learn a little more about Dack’s abilities, as well as see the beginnings of a working relationship forming between him and Ingrid, much to her father’s annoyance.

The two of them are led on a merry chase by Sifa Grent, the woman Dack has been hunting ever since he “liberated” a particular knife back in issue one. With links to his past, he is desperate to find out more and, if possible, mete out justice for a mass-murder.

I’m really enjoying this series, and with each new issue, I just want to read and find out more of the Magic: The Gathering setting. (Although, I’m not too interested in it as a card game…) 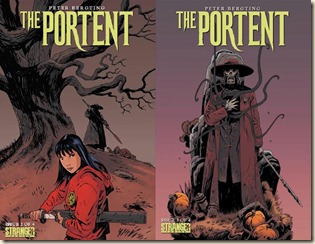 Secrets are revealed as Milo, Lin and Alkuin confront the mighty Mokkurkalve… and each other. When the heroes arrive at their destination, they find it deserted. Dai-Jiu, the good spirit they seek to protect, is gone. Instead, they meet Mokkurkalve, once the Guardian of Dai-Jiu when the gods were young, now sent to be the Destroyer. Or so they think.

Snow falls heavily upon the land caught between heaven and hell. With Alkuin and Dai-Jiu dead, Lin and Milo expect the end to come soon. But in a land of spirits, prophecies can be wrong and death is not necessarily an end.

In the first of these two issues, we get the back-story of Dai-Jiu, the “first spirit”, as well as a little bit more background of what’s going on behind-the-scenes. Our heroes are betrayed by one close to them. The story is really strange, filled with weird and wonderful, not to mention imaginative elements. In issue three, Lin and Milo struggle through the snowy regions of this world, experience a kindness from two strangers, and arrive at their destination. The ending was a surprise, a real cliff-hanger, and I can’t wait to read the final issue!

There’s a sense of humour at work, here, too. For the main, the story’s quite serious in tone, but there are a couple moments that made me snort with amusement (page eight of issue two, for example).

The artwork is, as expected, eye-catching and vivid. There’s a debt to some of the less-stylised types of Manga art, but with a very Western twist. This is also true of the story, which reminds me a lot of certain elements of Chinese and Japanese mythology.

I really like this series – it’s quite different from anything else I’m reading at the moment. If you like your fantasy comics with an Eastern flavour, and a dash of Guillermo Del Toro-type weirdness, then I’d definitely recommend this.

[The Portent #3 is available through Graphicly, as is the rest of the series and other Stranger Comics titles.]

Posted by Civilian Reader at 1:07 AM