I’ve decided to split the ‘Dark’ and ‘Edge’ review into two (otherwise, it would be a review of 21 comics, and that could end up being a bit unwieldy). These titles are, with the exception of Justice League Dark (a late addition to my pull-list), the ones that originally attracted my attention when I first started reading about the New 52. They promised more gothic, twisted and (excuse me) darker stories. I was not at all disappointed, and in fact these are some of my favourite comics full-stop, not just from the New 52.

[While on the subject of The Dark, a reminder that I’ll be reviewing Swamp Thing #1-6 in an all-in-one, separate review.] 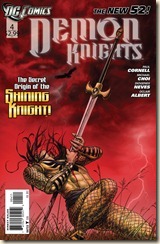 #4 – It wasn’t a coincidence that the Shining Knight found herself in Little Spring as the Horde massed at the village gates. She’s on a quest, and has been all her long life – whether she’s known it or not! Now, a powerful vision will reveal to her the true stakes of the battle for Little Spring and pull back the curtain on one of the biggest secrets in the DC Universe! Don’t miss “Merlin Watches The Storm”.

#5 – The pressure is mounting as the Horde prepares to breach the walls of Little Spring – but inside the town, our heroes are at each other’s throats! With their fragile alliance in tatters, and the enemy whispering in their ears, someone’s going to break – but for a reason you never saw coming!

#6 – Bodies are piling up, and one of their own has switched sides to lead the charge to destroy them! So how will the Knights turn the tide of battle? It all comes down to the deal Etrigan and Jason Blood have made. But can a demon truly be trusted under fire, or would he rather watch you burn? 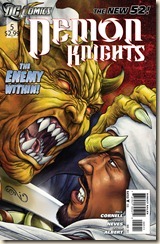 In the first of these three issues, we get something pretty interesting, if not exactly as gripping or engaging as past issues – it’s a chapter focussing solely on the Shining Knight’s past, and the mission Merlin gave her. Therefore, we don’t really get much movement for the larger story. I would have liked a little more momentum and progress, but it was nice to get to know another character a bit better. The issue has a great, shocking final page, though. [I’ve said it before on the blog, but I’ll say it again: damn that’s a nice cover for issue four…]

The fifth issue felt a little like a place-holder, while the evil Queen attempts to sway the travelling heroes – this was done in a pretty interesting way, and also allowed us to get to know the characters a little better. Certainly, it was a good narrative device, skilfully avoiding clunky exposition. Also, a devastating betrayal is revealed. 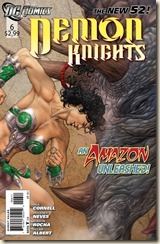 Considering how long the warriors have been waiting for the Queen to order the attack, issue six was yet another Another pre-siege chapter. The overall pace of the series feels like it’s dropping a bit. I still find the story interesting and engaging, but I’m starting to wonder if this would do better as a collection? There’s a big finish to the issue, so it will be interesting to see what happens next.

The series is rendered in superb artwork; it is really vibrant and cleanly drawn. Overall, this remains a good series, and it’s nice to be reading a historical fantasy comic set in the DC universe, with ties to the ‘present’ storylines, too – Etrigan has featured in Batman issues pre-New 52, and the demon’s love interest is Xanadu (who’s in Justice League Dark). Interesting stuff, but a casual reader may have found their interest drifting a bit at this juncture. I’m sure things will pick up in issue seven and beyond. 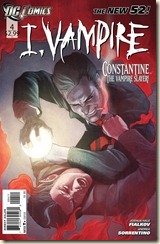 #4 – Straight from the pages of Justice League Dark comes John Constantine! Problem is, rather than help Andrew in his war against the Queen of Blood, Constantine figures it would make more sense to just wipe out all of the vampires, including Andrew!

#5 – The war of the vampires comes to Batman’s doorstep! The Queen of Blood has deadly plans for the citizens of Gotham City, but before Andrew can stop her, he must face The Dark Knight!

#6 – It’s a shock ending you won’t see coming! Guest star Batman grudgingly helps Andrew fight the Queen of Blood, who has taken over Gotham City with her army of vampires! But Mary’s going to lose something dear to her in the process! 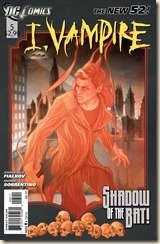 With his new allies in tow, Andrew takes some time out of an evening to get something to eat. While sifting through the dumpsters behind a medical office, he stumbles across another vampire, scavenging for medical waste (read: blood). Andrew teaches him how to shape-shift, but the it doesn’t have the effect Andrew intended. In the process of enjoying his newfound power, the new shape-shifting vampire disturbs John Constantine. This calls down a reckoning.

In the fifth issue, Andrew has tracked Mary’s movements to Gotham City, and his little team rock up at the site of a train massacre. Given the timing, a certain caped detective wants a word with Andrew... Issue six offers a stunning ending to this story-arc, as Andrew, Batman and the others finally confront Mary and her new army. We learn a little more about how vampire hierarchy works, and then things get bloody. Very bloody. And then even more shocking. 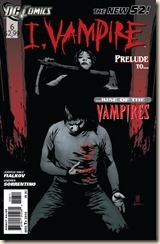 I really love Sorrentino’s artwork – beautifully, darkly gothic, it perfectly evokes the horrific world the vampires operate in. It’s amazing. Sorrentino was absolutely the right choice for this title. Fialkov’s writing is, of course, excellent as well, and I am so very much looking forward to the next issue. In the meantime, however, the story that is about to kick off in the series is a cross-over event, which continues in Justice League Dark #7, so I’m very glad I’ve been following that series as well.

One of the top five titles in DC’s New 52, easily. Very highly recommended. 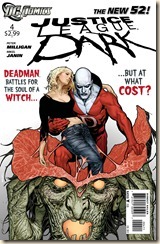 #4 – Madame Xanadu’s plan is working! Zatanna, John Constantine, Shade the Changing Man, Mindwarp and Deadman are all being brought together. But will Xanadu’s manipulations blow up in her face when she learns that Enchantress has grown too powerful to be controlled?

#5 – Enchantress is out of control and more powerful than ever. She has brought a nation to its knees through her arcane powers. Will Madame Xanadu, John Constantine, Shade the Changing Man, Zatanna, Mindwarp, Deadman and June Moon be able to work together to defeat her? One thing is certain: One of these heroes will not make it out alive!

#6 – Enchantress has been subdued, but this team of misfits hardly knows how to celebrate when each is still wrestling with their own demons. While Zatanna and Constantine try to decide on their next steps, Deadman deals with his loss, and Shade the Changing Man tries to bring Mindwarp back from the edge of sanity – but at what cost? 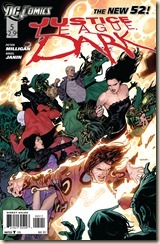 June and Deadman attempt to contact Shade (not sure if he’s the same Shade as that in the eponymous DC title), while the Enchantress’s simulacra continue their bloody search for the real June. Zatanna, Xanadu and John Constantine continue their investigations. Nobody really trusts anyone else on this ‘team’. This is a bridge issue, for sure, without a whole lot of movement forward with the story, but it remains a very good one. Things lead nicely into the fifth issue, which finishes of the first story arc in an explosive, psychedelic fashion.

In the last of these three issues, the team members have gone their separate ways, but bad stuff keeps happening – some pretty disturbing hallucinations, and some spells go horribly wrong. 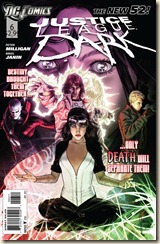 They return to Xanadu’s mansion, only for something even worse to happen. This issue sets in motion some of what is going to happen in the crossover-event shared with I, Vampire. (The more I read about it, the more interesting it sounds, and the more impatient I become to read it…)

This is another wonderfully gothic title, and I’m really enjoying it. I was unfamiliar with all of the characters beforehand – save for John Constantine, who I knew of, but had never read about (I have seen the movie, though). It’s not the most action-packed of series, relying more on tension and weird-and-scary shit – and there’s plenty of occult mystery and horror to be enticing and keep me reading. Crisp, clean artwork that manages to be dark and gothic all at the same time (the final page of issue four was particularly awesome), really brings the story to life on the page. Another highly recommended series. 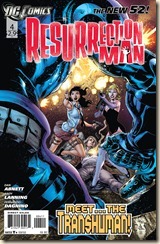 #4 – Who is the Transhuman? And why is he risking his life for the Resurrection Man? And even with his help, will our hero be able to fend off the bounty-hunting Body Doubles and the forces of both Heaven and Hell?

#5 – Mitch Shelley is dead. Again. But this time, things are different. He’s no longer in the realm of the living. While the Body Doubles try to find out what happened to him, the Resurrection Man must find a way to escape the realm he’s trapped in before a host of celestial beings finds him…

#6 – Welcome to Arkham Asylum, Mitch Shelley. No one believes you when you say you gain new powers every time you’re reborn. And no one is going to let you die to prove it. You’re going to be here a long, long time… 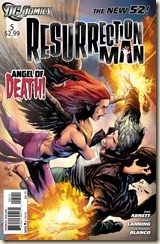 We’re finally getting to see and learn a little more of the various players involved on either side of the Mitch-hunt. It’s pretty interesting, and I think bodes well for the series as a whole, as there is so very much potential here.

The fifth issue finally provides some back-story on who Mitch is, what he did before he acquired his resurrection-powers, and also information on a few of the other characters and how they are connected to Mitch (present and past). It’s not at all what I was expecting, so that was a great surprise. It’s intriguing stuff, and it was very nice to get a few more pieces of the puzzle (as well as more questions). 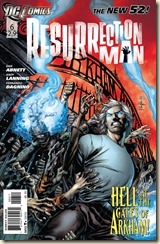 Now, the sixth issue was absolutely fantastic. Stuck in Arkham Asylum, Mitch has to engineer his escape somehow – if only he wasn’t so doped up to the eyeballs on sedatives. How do you prove you will be resurrected if you’re put on suicide watch? An asylum-break and plenty of psychotic inmates could well serve Mitch’s purposes, as long as he can manoeuvre himself into the right situations. Everything from the writing to the great artwork in this issue made it easily one of the best so far.

I really must try to get a copy of the first volume of Resurrection Man (now available in TPB, and also written by Abnett and Lanning). This series has a great character and premise, and is created and produced by a superb creative team. The quality of the sixth issue gives me hope that it’s only going to get better in the future.