Bit of a slow pre-release week selection of comics (only one issue, to be exact), so I’ve included a few issues I picked up late last week – two were great, one good, and one mediocre at best. 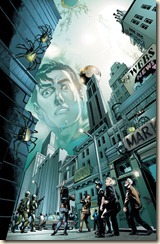 Metropolis has been captured! To save it, Superman must push the limits of his nascent powers as never before! Aboard the ship that has the city captive, The Man of Steel finds an important tool that may help him defeat Metal-zero and his boss!

And as Superman fights foes in the sky, Steel must do what he can to protect those still in danger on the ground.

Drops us right back into the story from issue four, with no pre-amble whatsoever, and certainly no mention of the events of the past two issues. Not very impressed. Clark jumps out of the Earth’s atmosphere to get on board the collector’s ship, and while there we discover how he got his uniform. Although, quite why he gets his uniform up there is beyond me.

The back-up story, is interesting and I did quite like it – certainly more than the main story. Focuses on Steel, back on Earth while Clark is up on the Collector’s ship, attempting to free Metropolis-in-a-Bottle. I particularly liked Walker’s artwork. Reminds me a little of Lee Bermejo’s, but not quite as gorgeous. 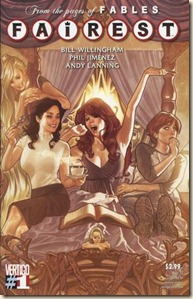 The first 6 issue arc follows the misadventures of Briar Rose after she is stolen away by the goblin army in FABLES #107.

I’ve been looking forward to it for a little while, as it would be my first proper taste of Willingham’s Fables world and mythology. And, I must say, I really enjoyed it. It felt long and substantial, packed with story and truly amazing artwork (perhaps the nicest I’ve seen in any single comic issue). Ali Baba is the main character, and he’s found a bottle, which contains a strange, blue imp. Unfortunately for Ali, it’s not a genie, so there are no wishes. Instead, the imp can offer information, which ends up being rather useful for our hero, as he is led to a camp where he will find a “great treasure”. There’s an interesting antagonist, and I was left wanting very much more – enough that I went online to check the prices of Fables collections as soon as I’d finished this issue. (Sadly, they are a little too expensive for me at the moment.)

I have one comment about the production value of the issue. In the initial pages that were available in the Vertigo Comics March Sampler, it was printed on glossy paper, and yet the actual issue is printed on matte-finish paper. There’s nothing wrong with this per se, of course, but it has had the effect of giving the artwork a slightly muted, duller quality. A strange choice by Vertigo, I think.

One of the most interesting things about this title for me, however, lies in the future, when story arcs will be written by 2011 Arthur C. Clarke winner Lauren Beukes (Zoo City, Moxyland) with art by Inaki Miranda, and iZOMBIE scribe Chris Roberson with art by Shawn McManus. Really eager to see what they come up with.

In the meantime, this is pretty great, and has only made me more interested in trying Fables. I’ll definitely read more of this series. 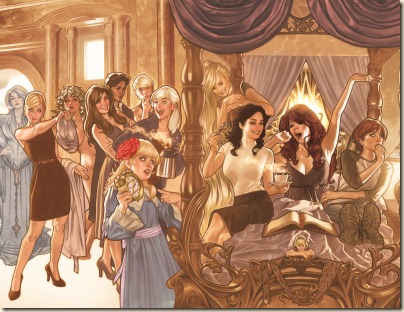 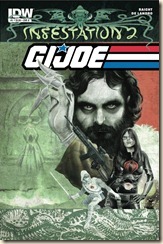 Cobra has always had a penchant for dark experiments. This time they’ve gone too far and opened a portal to a realm of violence and madness. As squadron after squadron of Cobra Vipers falls under the thrall of the Elder Gods, there seems no way to stop the hideous transformations that are taking place. The only hope lies in a group of already-insane Cobra agents... and a Joe named Snake Eyes!

Picks up the story with two of the survivors from Infestation 1. This time, they are stationed at the Snake Pit – a training facility and also asylum for Cobra’s… wayward recruits. Apparently, Cobra Commander has tasked Dr Llund with seeking out occult and supernatural artefacts to aid in Cobra’s endgame (how very like Himmler of him…). This, of course, means the strange Cobra operative Crystal Ball is called in to consult. Or, as it transpires, prevent Dr Llund from making a very stupid mistake. He is unsuccessful.

The Interrogator, Crystal Ball and Storm Shadow seem to be the only ones immune to the Doctor’s ritual, and the job of cleaning up the mess falls to them. Them and a bunch of insane Cobra recruits and failures…

This was quite fun – I do like the alternate stories the Infestation series bring up. Mixing Lovecraftian horror and beasties with some of the best-known brand-name comics is a great idea, and IDW and their creative teams pull it off very well, yet again. In the first Infestation event, the G.I.Joe issues were the best, and it looks like they may be again. That being said, I do really like the Dungeons & Dragons issues, too (pity there aren’t any more focusing on those characters). It’ll be interesting to see how they wrap this up in a couple weeks. 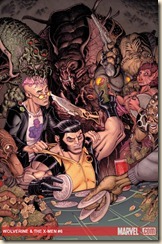 This is an extremely colourful issue, as Logan and Kid Omega go gambling on a garish intergalactic casino world, in order to save the school. In the meantime, Kitty Pryde is full of weird Brood parasites; an intergalactic terrorist has crash-landed at the Jean Gray School, and is rampaging through it after Kitty; also, a considerable number of the faculty and star pupils of the school have gone Inner Space in Kitty, attempting to help purge the Brood parasites.

It’s quite fun and ridiculous, and I’m starting to enjoy the series a lot more, now. I still prefer Bradshaw’s art to that of the previous artist, and the story is getting better, if weirder, but is not becoming overly stupid or ridiculous (as X-Men storylines go, at any rate). The story has a good pace, too. There’s a lot going on, but not too much, and we’re given enough each issue to feel like we want to read more, rather than are being strung along or short-changed. Very glad this has started to pick up again. 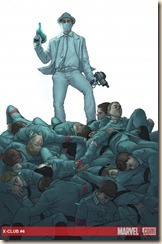 The X-Club Fights Nazis! With Science! And the villain responsible for framing the X-Men is finally revealed…

It’s now getting a little late in the series to delve too much into story without throwing up a ton of spoilers. Needless to say, there is a lot more jiggery and pokery going on; Dr Nemesis still has an empathic starfish on his head, vocalising his inner-monologue (while it’s less prominent in this issue, it remains very funny); the team discover a link to a bunch of crazy Nazis; Danger, the cyborg, is pregnant; Madison Jeffries is coming to terms with his technophilia; and it’s basically all kicking off. About the only serious part of this story is that which focuses on Dr Kavita Rao, who is working with the hyper-mutating sea dwellers in order to slow or even cure their rapidly degenerating condition. It is not going well.

This is, frankly, a fantastic mini-series – it’s funny, intelligent, batty, and very well-rendered to boot (drawing, colouring, shading, everything). Highly recommended for all fans of comics and especially the Marvel universe and X-Men in particular. Can’t wait for the final issue.

This is actually a very busy week for comics, with a lot of series getting new issues. I’m not going to be able to keep to my decision to not buy any more New 52 (I’m weak), so there will be a semi-long second round-up coming up after Wednesday. I guess finally catching up with all of the titles I was enjoying didn’t so much satisfy my curiosity as stoke it. I still think I’ll be making a gradual move towards collected series and more graphic novels over single issues (at least regarding DC and Marvel), but in the meantime, there are plenty of comics still of great interest.

Comics Dropped: The Ray (#4 – even though it was the final issue, but I may get it later in the week or further down the line), The Shade (#6 – going to wait for the collected edition)