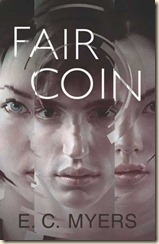 A great new voice in YA Sci-Fi

Fair Coin was a most pleasant surprise. Only the third YA novel I’ve read, I managed to blitz through it very quickly – not because it was simplistic or anything of that sort, but because it hooked me from the start and didn’t let go. It’s not perfect, but it is an awful lot of fun. Myers is definitely an author to watch.

Fair Coin offers up a lot of surprises as the story progresses, given how changeable everything is when Ephraim uses the coin. Therefore, it’s a little difficult to go into too much detail about the plot without presenting some whopping spoilers. Needless to say, the novel is filled with surprises, intriguing developments and plenty of twists throughout. At the centre of all the action is Ephraim, a teenager who exists at the edges of his school’s social scene.

Ephraim is your typical high school student – he’s not a jock, he’s not really in any clique, but nor is he exactly popular. He and his closest friend, Nate, are always together, and share a love of comic books and crushes on a particular group of friends: Ephraim wishes he could be with Jena, while Nate wishes he could be with one of the gorgeous twins, Mary and Shelley. Ephraim is an endearing guide for this novel, and his internal monologue and personal concerns will be familiar to probably most men and boys who read this. For example, his crush on a girl he believes unattainable that I’m sure most men can remember and boys will probably be experiencing. He’s not wimpy, but nor is he overly confident and competent (in fact, as time progresses, he ends up needing a lot of help from his friends, particularly Jena).

It’s interesting to watch Ephraim and his friends figure out the coin, how it works, and what, if anything, it means for it to land on heads or tails. As the novel progresses, he becomes particularly familiar with the meaning of “be careful what you wish for”. I loved how large a scope Myers has managed to inject into the story – he looks at far more than many wish-fulfilment stories do, giving us lots of great detail without much awkward exposition (there was maybe one section that felt a little over-explained, but even then only slightly).

There were perhaps a couple of moments when the story moved forward a bit quicker than expected – largely because the story is mostly happening in ‘real time’, which means when a chapter jumps ahead it was a little surprising. Myers has managed to balance the exposition quite well, without bogging us down in excessive details, never swamping us, and keeping it very accessible (even the bits when they are trying to figure out how the coin works, and they venture into quantum mechanics was rather interesting and very accessible).

All of the characters are well-drawn. I really like the way Myers has written his characters, in fact, and they all felt very natural. None of the dialogue struck me as cliché or at all childish – at the same time, the teenagers are not unrealistically adult in their mannerisms, speech patterns or abilities. I think my only issue with any of the characters was early on (until the middle-point), and that was with Nate’s character arc; the more I read, however, it became clear that this has a lot to do with the nature of the story and things that are meant to be hidden until we need them. These are interesting, three-dimensional characters, and they’re believable as teenagers (I experienced quite a few flashbacks while reading this, of the more mundane variety – sad to say, I did not have a magic coin, more’s the pity).

Myers writes with a very brisk prose style, and when combined with the pace and quality of the story, I was pulled on throughout and I ended up staying up well into the wee hours of the morning to get it finished in two nights (and a bit of the day). Not only that, when I wasn’t reading, I often found myself wondering what I would wish for, were I the one with the magic coin.

I thoroughly enjoyed reading this, and I eagerly await more from Myers and, perhaps, this setting. Highly recommended. This was a lot of fun.