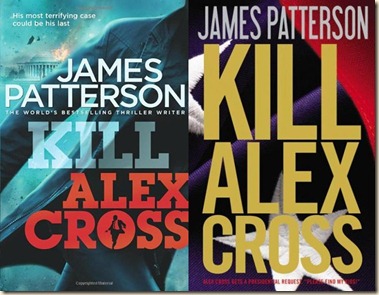 A terrorist threat, and the President’s children have been kidnapped

Detective Alex Cross is one of the first on the scene of the biggest case he’s ever been part of. The President’s son and daughter have been abducted from their school - an impossible crime, but somehow the kidnapper has done it. Alex does everything he can but is shunted to the fringes of the investigation. Someone powerful doesn’t want Cross too close.

A deadly contagion in the DC water supply threatens to cripple the capital, and Alex sees the looming shape of the most devastating attack the United States has ever experienced. He is already working flat-out on the abduction, and this massive assault pushes Cross completely over the edge.

With each hour that passes, the chance of finding the children alive diminishes. In an emotional private meeting, the First Lady asks Alex to please save her kids. But even the highest security clearance doesn't get him any closer to the kidnapper – and Alex makes a desperate decision that goes against everything he believes in.

I’ve read all of Patterson’s Alex Cross novels, and I’d been a little disappointed with some of the later instalments of the series. However, much to my pleasant surprise, Kill Alex Cross turned out to be a stand-out novel, and perhaps the best since Four Blind Mice (which is the point after which I think they started to lose quality). If you’re a fan of the series, and like me haven’t loved the more recent instalments, this should help you reacquire your faith in Patterson as a writer. It’s not as good as the first eight novels, but it shows some of the qualities that made his earlier novels so good and addictive.

The novel starts very strongly, as we’re thrown right into kidnapping and chaotic aftermath. I immediately got the feeling that Patterson’s stepped up his game with this novel, getting back some of the magic that made the first books so good. Cross is quickly reminded of the case of the first novel, Along Came a Spider, in which the psychopath Gary Soneji kidnapped two kids from wealthy and powerful families, and only one survived. He’s kept out of the loop while everyone tries to figure out how to proceed, and the mess of overlapping jurisdiction and power-plays drives him to distraction. To make matters even more complicated, a team of terrorists has entered the United States, and they begin a campaign American law enforcement struggles to stop.

The terrorists are an interesting group – different from your usual thriller Middle Eastern-terrorist bad guys, which sets the novel apart from the standard terrorist plot. Are the kidnapping and the terrorists connected? How will Cross navigate a resource-strapped crisis situation? Which takes priority? If the kidnapper is acting independently, what is his motivation?

Patterson brings in some popular commentary on Washington D.C., on the agency turf-wars, compartmentalization of information despite a state of emergency. Because of the lack of a contingency plan in the face of two crises, and the snarled D.C. bureaucracy, Cross is forced to make some decisions he ordinarily wouldn’t make, but with the eyes of American authorities prioritising the terrorists, a desperate and distraught First Lady pulls ranks.

Kill Alex Cross isn’t quite as tightly written in the first half of the novel, but it is still better written than most of the post-Four Blind Mice instalments. The second half of the book has a relentless pace, and I blitzed through it, reading well into the night. A couple of plot developments happen a little suddenly, without as much attention to detail as I would have liked, but the pace just keeps you reading and we make the connections needed ourselves. Because the story’s rattling along at such speed, we don’t really have much time to think about it until it’s all over, if ever.

There’s less focus on Cross’s family and non-professional life, which helped keep the focus on the two cases, and as a result there was a lot less schmaltz than Patterson has been prone to lately. There are still a couple of interesting new developments on the family front, though, so people who want to see that side of Cross should be satisfied.

Overall, I enjoyed this novel a lot more than I was expecting, and read it in a day and a half. I really hope this marks a turning point in Patterson’s approach to this series: a little more focus on the cases, a little more attention paid to the ‘thriller’ aspect of the series.

If you like the series, you’ll really like this novel. If you thought the series was weakening, this could restore your faith in it.

A surprise and welcome improvement.