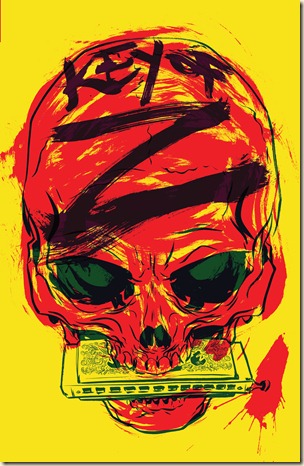 New York City is down but not out – the zombie apocalypse has destroyed much of the city, but hard-boiled humanity hangs on. But with the survivors divided into warring factions, and the undead hiding behind every corner, only one man can walk the streets alone: Nick Ewing. His murdered wife and child, from the grave, give him the strength to continue his vendetta against the king of Yankee Stadium.

The collected edition of Key of Z, an original and interesting take on post-apocalyptic zombie comics, is now in stores. The series is one of my favourite from last year, and if you like zombie-apocalypse stories, then this is an absolute must. I reviewed the four individual issues in two sittings (here and here), but I wanted to mention it again on the blog.

A couple of comments from my earlier reviews:

“If you want something a little different to The Walking Dead, then Key of Z would be a great alternative… Kuder’s artwork and Charlie Kirchoff’s colouring are great – very expressive and atmospheric, they bring the story to vivid life on the page. This is a great creative team, and I’m hoping they continue producing such good comics and stories… Very highly recommended.”

With a little time and distance from my first reading of this series, I can say that my opinion remains the same: this is a great mini-series, one that break the mould of the sub-genre, and is interesting and engaging throughout. Superb.

And, as a bonus, here’s a selection of preview of the first five pages: