A later-than-intended round-up of some new and recent Zenescope releases. Alice’s weird-and-wonderful adventures in Wonderland continue; Sela’s troubles unfold in Grimm Fairy Tales as a nefarious plot comes closer to fruition; a brand new, intriguing adaptation and re-imagining of the Jungle Book; and an extension of an alternative Hook story. 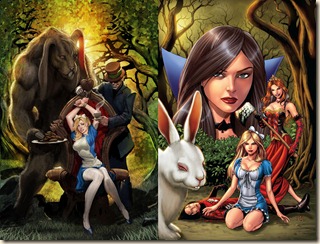 The adventures of Alice in Wonderland continue. After escaping the terror of the Carpenter, Alice finds temporary safety in an empty abandoned house in the middle of the woods. Exhausted from her ordeal she lets down her guard unaware that she is not alone in the house and the owner might be very mad indeed.

This is a particularly weird issue, but in an interesting and riveting way. Alice has escaped various predicaments (which are handily reviewed for the reader in the middle of the issue), before being captured by the Mad Hatter and taken to a bloody tea party that certainly does not go according to anyone’s plans.

I’ve really been enjoying this series. Alice in Wonderland was such a rich story to begin with, but in this series (and, I assume, the other Wonderland series), Gregory has managed to create something delightfully twisted, weird, and thoroughly engaging. Everything from the writing to the artwork is fantastic, and I strongly recommend this series to anyone who likes their fairy tales a little sick and twisted.

[If anyone’s been reading and enjoying Chris Roberson’s Memorial, I’d wager that this would appeal, too.]

#67 – Sela has finally found her true love, Prince Eric, trapped in the limbo of Myst. In order to free his soul she will have to battle not only the Mistress of the realm but her most loyal servant, the terrible and merciless Jack the Giant Killer.

#68 – Sela and Druanna find themselves at the mercy of the Mistress of Limbo and in order to save themselves and Sela is forced to make a deal with her... a deal that may ultimately trap her in limbo forever and cost Sela her very soul.

#69 – At long last Sela is reunited with her true love Prince Erik. But the reunion promises to be a short one and when it ends Sela finds herself with more questions about her lost child and the Dark Hordes involvement in her past. Questions that only the Dark One himself can answer.

Jumping in a bit blind with issue 67 (up until this point, I’d only read the first six, so I have a bit of catching up to do…), I nevertheless found the first of these three issues pretty good. Sela and Druanna find themselves at the Gates of Limbo, guarded by a masked sword-master, who makes short work of their apparently inept guards. Although, given the speed with which Sela and Druanna dispatch him, I don’t have high hopes for the less “terrible and merciless” guards of Limbo… Our heroines are quickly captured by the Mistress of Limbo, and start plotting their escape. Which doesn’t go particularly well, especially when Sela is reunited with Erik.

In #68, we learn a little of the Mistress of Limbo (Alicia) and how Jack came to be in her employ. It involves a horned red demon, who has also been messing around inside Erik’s head. This issue handily recounted most of the events that led up to this point in the story, so it may be a good place to start if you don’t want to start all the way at the very beginning.

In the last of these three issues, Sela and Druanna are thrown into the fighting pit, and unwittingly give Alicia exactly what she needed to progress to the next step of her nefarious plot. I’m not entirely clear what this plot actually is, but it’s quite interesting to see it playing out.

If I’m honest, my lack of familiarity with the series puts me at quite a disadvantage. There’s just so much going on, and so much has come beforehand, that I probably missed a number of things. This may explain why I’ve preferred some of Zenescope’s newer or short-run series over this flagship title.

As for the artwork, it’s an interesting idea, using different artists for each issue. It had the potential to be a disaster, but each of the creative teams manages to keep to the Grimm Fairy Tale aesthetic very nicely. I’m not sure if I preferred any of the style used more than either of the others. 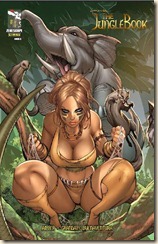 A pirate ship carrying four children crashes on the shore of a mysterious and merciless jungle. Each child is taken by a separate tribe of animals as a means to keep the peace between the species. It is a peace that will not last... Fifteen years later the children have now become young adults and each will have to face the destiny that awaits them in the unforgiving jungle. A place where only the strong will survive. Zenescope brings you their newest reinvention of a classic tale that is going to blow you away! Featuring four connecting covers by Deadpool artist Ale Garza and DC superstar colorist Nei Ruffino and a retailer incentive cover by Zenescope superstar artist Mike DeBalfo!

Now this was very interesting, and I particularly liked the way the writers have altered and adapted the story. It opens with a pretty dark introduction – the four children of the synopsis have been kidnapped from their homes and sold into (one presumes) slavery. Because of the shipwreck, however, they wash up on the island and create enough of a stir that the war that has been raging between the animal groups comes to a momentary pause. After laying the groundwork and setting the scene, the story moves to focus on Mowglii (a girl in this version), who knows nothing of the other children, and has known only peace on the island.

The artwork is very rich, with vibrant colouring and clean lines. A very enjoyable new series, I look forward to reading more of it. Despite it still being very early days, this was a very pleasant surprise. 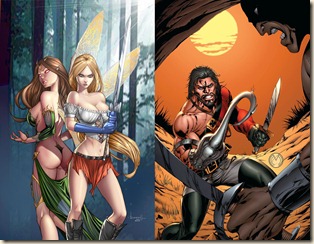 Cross discovers that someone he thought was a powerful ally is in reality his greatest enemy and far more dangerous than Pan ever was. Belle returns to Neverland with Wendy in time to help Cross face this new foe but even their combined powers have little hope of defeating the monster that now seeks to become the new ruler of Neverland.

The issue drops us right into the conflict that ended the previous, and the momentum is maintained rather well. (I would not recommend this as a jumping-on point.) We learn more of how Pan came to power, and that the current terror in Neverland is, in fact, the former king who Pan usurped: Barr. Barr has concocted a nefarious plot to increase his own power, having been changed by his exile and help from his own fairy, Nyx.

I rather like this series. I read the previous issues in one go, but haven’t yet managed to read the first Neverland series (although, I did recently purchase it from Comixology). Nevertheless, I didn’t have any trouble getting situated and enjoying this follow-up series. It’s fun, action-packed and well written. The artwork is solid and does its job very well (it lacks some of the flair of some other Zenescope titles, though).

As a general aside, if you have never tried a Zenescope comic, I would certainly recommend them. If you have any interest in fairy tales or classic stories (which are experiencing quite a resurgence on TV and in Hollywood and publishing), then pretty much every series published by Zenescope should hold something of interest for you. The artwork is always good, and in the distinctive house-style. Despite what some people might think of the titillating cover variants, these comics are not “that sort” of comic, and barely any of the ones I’ve read have featured any sex and no nudity (no more than other comic series, anyway). I highly recommend Zenescope titles – they are intriguing, engaging re-imaginings of classic stories.

Posted by Civilian Reader at 4:39 AM