Here’s the first of four bumper New 52 Catch-Up posts. In this one, I focus on three Superman-related titles: Action Comics (#5-6), Superman (#4-6) and Justice League (#4-6). I had considered continuing with Aquaman as well, but decided that I would wait for the first collected edition (the same can be said for The Flash – which I’ve been told is excellent). I must say that I’ve been unimpressed by Action Comics overall, despite some moments of genius; I remain quite fond of the new Superman series; and very happy with Justice League. 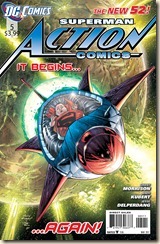 #5 – As the assault from an alien threat takes a turn for the worse for Metropolis, keys facts about Superman’s past are brought to light for the first time! And how can certain elements from The Man of Steel’s future help to prevent the theft of the millennium?

#6 – The Superman of the present day must team up with suspiciously different versions of the Legion of Super-Heroes to save the jeans-wearing Superman of five years ago! Whose hand is that on the cover? Why, the leader of the Anti-Superman Army, of course! 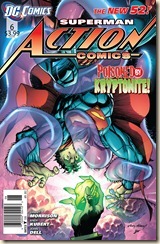 The first of these two issues takes us back to the fall of Krypton, as we see another version of the destruction of that planet and Jor-El’s attempts to save his family. Offers a little more than we normally see. This is followed by a really nice double-page title-spread of Krypton exploding and Kal-El’s escape rocket in the foreground. Well done, sir! Really awesome image.

Unfortunately, the rest of the issue was rather vague and not particularly clear or interesting. It seemed to follow the story of Kal-El’s escape ship, jumping about and getting a lot of snippets of what (I assume) is to come in Action Comics. I didn’t care for it too much, I’m afraid. The back-up story detailing the Kents’ life before they found Clark’s ship was a nice addition, giving us an alternate perspective, one we don’t see too often.

The sixth issue doesn’t exactly improve matters, although there’s at least some solid story to it. Nevertheless, I lost patience before I got halfway through, and I know I was skimming and merely looking at the pretty pictures for much of the rest of it. I switched off around the flashback scene in which Clarke beats up a bull – it’s a scene I really did not understand.

I sometimes wonder if Morrison’s dialogue is childish, or if he falls into the trap of telling, even though the medium he’s working in is perfect for showing. On the strength of this series (and All-Star Superman), I really don’t understand how he’s become such a force in comic books. He seems so wildly inconsistent. With six issues of this series behind me, I’m afraid I remain unconverted to the Cult of Morrison: I think his writing remains too hit-and-miss despite the quality of the overall ideas he comes up with. The weakness appears to be in the execution of these ideas, not to mention some disappointing authorial preferences.

My main question about these two issues is, why the move away from the main story? That at least was interesting. I think Action Comics is no longer for me. This is where I stop buying and reading. There are so many more series out there that are more consistent, better-written and overall more interesting. 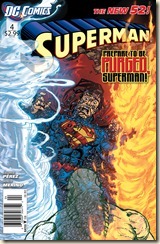 #4 – Discover the origin of the new foes who have been making The Man of Steel’s life so painful and chaotic lately. What are their ties to the current ACTION COMICS epic? Plus, Lois Lane uncovers a tragic secret from Superman’s past!

#5 – There is a malignancy in Metropolis that is ruining the city, and its name is Superman! The aliens who have been attacking The Man of Steel these past few issues unite to purge the Earth of Superman! The worst part? The people of Metropolis seem to agree with the aliens!

#6 – Recently, an onslaught of creatures has targeted Superman, nearly destroying Metropolis in the process. And now… Superman is helping them finish the job? 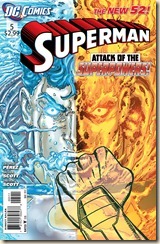 The first of these three issues is very good, as Superman tries to deal with the fire, ice and reptilian beasties in the aftermath of the ice storm. At the same time, the Daily Planet people are starting to wonder about Clark, who’s becoming flaky and a little more anti-social than normal. The fourth and fifth issues see Superman overcome by the alien forces that have been terrorising Metropolis and targeting him. What emerges is a Superman who brooks no crime whatsoever, and institutes a zero tolerance approach to crime in the city. Things escalate as anti-crime grows to anti-dissent, and a reporter falls into his cross-hairs. 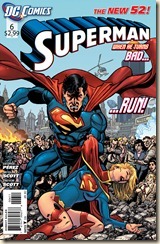 Then, in the sixth issue we get some more information and explanation of what’s going on. The story also connects to a number of other New 52 titles: Superboy #6, Supergirl #6 & #7, and quite a bit to Action Comics #7 (sigh, I guess I will be reading just one more issue of that series...). Turns out Superman is set five years after Action Comics at this stage. The sixth issue nicely wraps up the first story arc, and I was quite surprised by the explanation and deconstruction of events. It’ll be really interesting to see where this series goes in the future. Much was made of the fact at the start of this series that Lois Lane was completely uninterested in Clark Kent, but there were a couple of things in the sixth issue that suggested things may change in this regard.

I like that journalism is very central to the story of this series – be it some well-placed comments about the state of the profession today, and the changing nature of the journalism industry (greater focus on TV over print, for example). Thought this was great, and reminded me of Superman: Earth One [review coming soon]. This was more prominent in the first couple of issues, but it’s a theme that continues throughout. Nice contemporary relevance.

Overall, this is a very good series. The artistic team is very talented, and every issue is rendered in great, vivid artwork. I really like it, this is a great title and a must for Superman fans and people who’d like to start reading Superman comics alike. 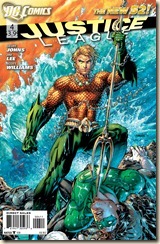 #4 – The origin of the Justice League continues as The World’s Greatest Heroes face the might of Apokolips – and find aid in an unlikely hero, as Cyborg is created.

#5 – Now, with the teenaged powerhouse Cyborg at their side, this group of individual heroes must somehow put their differences aside to face the terror of Darkseid!

#6 – The Justice League is united at last against Darkseid! The awesome consequences of this high-stakes battle will resonate within the series for years to come! Geoff Johns and Jim Lee end their historic first arc with a bang! 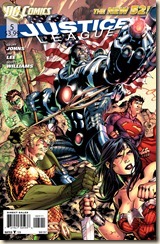 The team are still getting to know each other in the fourth issue, and we’re presented with the problems you always get in a group of alpha personalities: a power-struggle. Only, this time with a lot of snarky comments, and it’s better-natured than one might find in, say, a Wall Street bank. With Aquaman newly arrived into the mix, the grumbling continues. Then Green Lantern asks him what he can do, and things well and truly kick off (a very eye-catching action scene). Cyborg stumbles across the team, though he’s still trying to get used to his new augmetics (and the sense of betrayal he feels towards his father), but he’s eventually co-opted on account of being different and having special abilities.

The last two issues see the fight taken to Darkseid, and the team start to gel and work together very well. The stuff set in Darkseid’s realm were very dark, twisted, and all builds to a brutal climax. For me, however, the most interesting part of the sixth issue was the final seven pages, which set up the next story arc. It’s really intriguing and definitely whet my appetite for more. I’ll certainly be reading this series in the future. 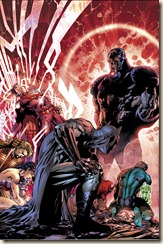 There’s a fun dynamic amongst the new team members, but this doesn’t dominate the story. When the team get through to Darkseid’s realm, things get grimmer and darker.

The series has enjoyed and benefited from vibrant artwork throughout – really strong colouring, composition, shading… well, everything. The artistic team working on this is extremely good. The aforementioned final seven pages have a darker, moodier colour palette, and I think I liked those the best. Superb. This is a must-read series.