“Garro: Legion of One” by James Swallow (Black Library) 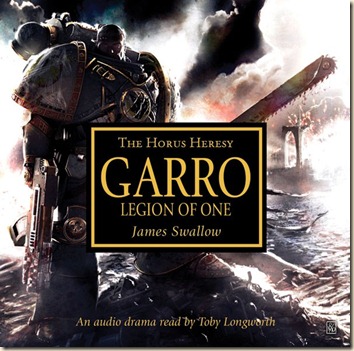 This is the second audio drama featuring Nathaniel Garro, loyalist Death Guard, hero of Flight of the Eisenstein, and special agent of Malcador the Sigilite, the Regent of Earth. Garro and his pair of comrades are on Isstvan III, long after the treachery and a year after Oath of Moment. I enjoyed this audiobook, and it manages to improve on its predecessor quite well.

A being calling itself “Cerberus” is stalking the ruins of the world, lost in its own delirium and PTSD-induced madness, reliving the moments of Horus’s great betrayal in his mind, and hunting the surviving loyalist and traitor forces alike, unable to distinguish friend from foe. Who’s side is he on? And, more importantly, who is or was he before the drop-site massacre?

Garro and his team have been dispatched to Isstvan to find his latest recruit. At this point, he has two companions on his mission, Tylos Rubio (Ultramarine Codicier) and Mesa Varren (World Eater). There are some interesting dynamics between the three comrades, as Garro and Rubio set out to discover who the “beast” (Cerberus) is. Varren remains behind to protect a group of human, loyalist survivors. The fates are not on their side, though, and Cerberus attacks them.

An interesting addition to the story is the fact of Garro’s new-found faith in the teachings of the Divinitatus cult (which worships the Emperor as a divine being), a fact he must keep secret from his companions – especially Rubio, whose psychic abilities give him some insight into these things, and therefore seems most suspicious of it. He finds his new faith a comfort, however, when confronted with the sign of Nurgle, which has infected members of his former Legion, and also some survivors on the planet. (Reminiscent of Cadian Blood by Aaron Dembski-Bowden, which I highly recommend if you want to read more about how the Death Guard have been twisted by the “blessings” of Grandfather Nurgle.)

I’m not 100% sure where this audiobook falls in either the Heresy or Garro timelines. One of Garro’s companions, the loyalist World Eater Mesa Varren was not recruited during the previous audio-drama, and I think he’ll probably appear in the third audio-drama, Sword of Truth (which, confusingly, is set before this one…). I have a feeling it’s also set after Fear to Tread, the next full-length Horus Heresy novel (also by Swallow).

The voices employed are still not quite right for my mind. Garro’s is very different from the previous audio-drama, too. He doesn’t seem as strong as before. I’ve always imagined Astartes to speak in the flat-British accent popular in Hollywood these days. Instead, while Varren and Rubio have strong voices, Garro actually sounds almost like an old man. The titan deck-captain crewman sounds Welsh.

In both delivery and production, Legion of One is much less melodramatic than previous Black Library audiobooks. Longworth’s sub-Alec Guinness approach for the general narration is particularly good, too.