“The Run” by Stuart Woods 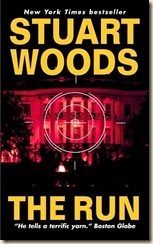 A respected senator from Georgia, Will Lee has loftier aspirations. But a cruel stroke of fate thrusts him onto the national stage unexpectedly, and long before he’s ready for a national campaign.

The road to the White House will be more treacherous – and deadly – than Will can imagine. A courageous and principled man thrust into the spotlight, he suddenly finds himself the target of clandestine enemies who will use all their money and influence to stop him... dead.

I’m not really sure what made me pick this up when I did. I’d been reading lots of fantasy and science fiction, and I think I just needed something different. I’d also just finished watching West Wing again, so was in the mood for an American political thriller. The Run is by no means a perfect novel, but it does exactly what we want a thriller to do, and I thoroughly enjoyed it.

The novel opens by introducing us to Georgia Senator Will Lee and his wife, CIA Associate Director Kate Rule Lee, as they drive home one evening. They are discussing their ambitions (his for the White House, hers for the Director’s chair at the CIA), and I must say I was initially made a little wary because of their apparent hyper-confidence, and the first few chapters read like we were listening in on a power-couple with extremely high opinions of their abilities. There’s “thinking positive”, and then there’s this… This became less of a problem as the novel quickly catches the reader up on previous events in the series, and we learn that Will and Kate are, in fact, very talented individuals. Things quickly pick up steam, and the novel sets off as events move quicker than Will could have anticipated on a number of fronts.

Will is an interesting character – for one thing, he comes across many time as too good, that perfect and flawless protagonist, always noble and able to control his desires and temper. Given when this novel was written, I suppose it’s not too surprising that a presidential candidate who is able to keep his appetites in check would be such a popular one (released in 2000, a lot of it was probably written during the Monica Lewinsky circus). That being said, it’s easy to forgive the fact that Will is such a noble character, as it’s becoming a rare character breed, these days. Will’s campaign enjoys some early campaign successes, which felt unrealistically fortuitous, and we’re supposed to just accept them as fact. To be honest, while I raised an eyebrow at a few (the New Hampshire primary results, in particular), I didn’t really mind them so much – largely due to Woods’s ability to craft a fast-moving narrative.

These minor political missteps or smoothings-over are actually more surprising when you take into account how well-considered the political discussion is in the novel. Will Lee is a centrist (some would say he plays things too safe – although, unlike Romney, he is not a political weathervane, and maintains the courage of his convictions over the courage of his ambitions). Woods writes some great speeches for his character, which come across as sensible, balanced, and well-considered (they’re not all Democratic, but most of them are). One thing that comes across in the novel is how little politics has moved on in America: many of the issues that crop up in the novel are still visible (or audible) 12 years after this was written – of course, the economic situation is wildly different, and the complaints of partisanship pale in comparison to some of what we’ve seen recently. [Another set of novels that highlight the unchanging nature of American politics are Richard North Patterson’s No Safe Place, Protect & Defend, Balance of Power, and The Race – all of which are excellent.]

It’s clear that Woods wanted this novel to be, in part, a commentary on the state of American politics and society at the time. This leads to a couple of odd timing issues: the narrative and events clearly state that it’s the 2000 election season, but it’s not the Clinton Presidency they’re trying to replace. Nevertheless, Lee is still asked to comment on the Lewinsky Scandal, which blew up in Clinton’s second term. This was a bit of an odd decision, and I wonder if it could have been done better by creating a fictitious presidential scandal that was obviously inspired by real events and woven that into the alternative timeline of this series.

To refer back to Will and Kate’s ambitions, for a while I was confused by the potential for Kate being nominated and confirmed as the Director of the CIA. Given that there is a law prohibiting family members from heading different branches of government, I wondered how this would work. There’s mention of JFK and RFK, but no mention of the fact that the Kennedy’s situation is why the law came into being in the first place, so I’m not sure it was a very good example to use. [Thanks again to Justin over at Staffer’s Musings for clearing this up for me – much appreciated!]

The novel is filled with plenty of back-room, political intrigue; tussles with corrupt and over-ambitious politicians; seedy pasts coming to light and leading to blackmail; and so many more classic themes of pre-9/11 political thrillers. The portrayal of Washington is deliciously, delightfully Machiavellian. But almost none of it directly involves Lee – he is mostly unaware of what’s going on, although he certainly benefits greatly from others’ manoeuvres.

Over the course of the campaign, a group of extremists plan to take Will Lee out. The group have connections to one that featured in Grass Roots, the previous novel in the series (which I haven’t read), which accounts for Will becoming the target. I enjoyed this thread of the story, as I think Woods wrote a very convincing antagonist. Also, the scene in which they decide to take out Lee was chilling: the people involved were so calm, it was done in the same manner as a group of friends deciding on who was going to go on the next beer run. Only even calmer than that!

Woods has a great writing style, and it’s not hard to see why he is so successful and his books so popular. His prose is fluid, his dialogue realistic, and the characters are well-drawn, three-dimensional and likeable. I was reminded of a number of other thriller masters while reading this – everyone from Tom Clancy to David Baldacci and John Sandford. I blitzed through The Run (I basically read it in a day, staying up until after 5am to finish it), and because it was so entertaining, its few minor flaws slipped by the way-side as I got caught up in the ride. The story is engaging, tense even though we have a good idea of how the outcome has to play out, and gripping. This is exactly what I was looking for.

Highly recommended if you’re looking for a classic-style political/electoral thriller. I’ve since bought the next two novels in the series (Capital Crimes and Mounting Fears), both of which I intend to review very soon. This was a great read.