An Interview with GAIE SEBOLD Babylon Steel was one of the stand-out novels for me in January. It was just so much fun, with a strong protagonist and an imaginative and quite original fantasy/sci-fi setting. For me, Sebold is an author to watch, and someone whose work will always be high on my to-buy list. I strongly recommend her work to anyone who likes fantasy. Read on for an interview about her novel, work, and thoughts on the genre.

As a debut novelist, I thought I’d start off this interview with something easy: Who is Gaie Sebold?

Er… Someone who is instantly stricken into inarticulacy by this question? Someone who is watching the rapid approach of her half-century with stunned disbelief, having been under the illusion that she was supposed to have grown up by now. Someone who has a few swords, too many hats, a boyfriend, a mortgage, a garden, a cat, and a day job. And books. Lots of books.

Your debut novel, Babylon Steel, is out now through Solaris. It’s the first in a series, if I’m not mistaken? How would you introduce it to a new reader? And where would you like to see the series go in the future?

Yes, it’s planned to be a series; I’m currently working on the sequel. As to how I’d introduce it to a new reader: probably something like;

“Babylon is an ex-goddess of sex and war who runs a brothel in a fantasy city. There’s sword-fighting, murder, and interspecies bonking, and I’m quite disrespectful about religion.” 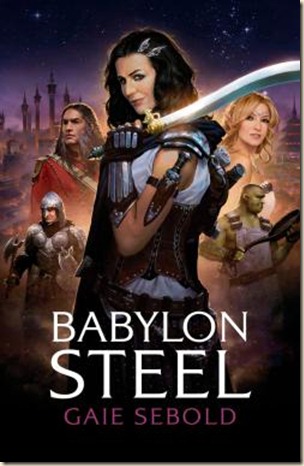 That would be very hard to pin down. The idea for a brothel in a fantasy setting has been hanging around for some time; and where that came from I honestly couldn’t tell you. I can say that I had it long before I had sufficient courage of my convictions to actually write about it! And it took several years for Babylon to turn up as a fully-fledged character, and the world to start growing around her. Lots of things have probably contributed; getting involved in live role-play, learning a bit about martial arts, learning a bit about the Goddess Inanna, and a longstanding fascination with the idea of doorways to other worlds that were only a step away.

I’ve been a voracious and indiscriminate reader since the age of four; that’s probably my major inspiration. I also love film, and art, though I’m quite staid and old-fashioned in my tastes. I like story and sympathetic characters, art that suggests one or both; I find it hard to connect with stuff that’s extremely surreal or wildly abstract. I’ve had story or character ideas from books, pictures, fragments of history and old photographs. I’m basically a magpie, I think. If it glitters I’ll pick it up and stuff it away somewhere in case I can use it.

I adore really good dialogue, whether in films, books, or graphic novels; it’s one of life’s great joys. I’m a dreadful eavesdropper, always waiting for someone to come out with the perfect line. I’ve occasionally written entire scenes just to fit in one exchange of lines. Often they end up being cut, but not always.

Probably almost everything I read as a child would count as genre. The Water Babies, Dr Doolittle, The Land of Green Ginger, Alice in Wonderland, The Jungle Book, the Andrew Lang collections – man, I loved those so much, I had loads of them. Someone gave me a book of Norse Legends that had been rewritten for children (still pretty good, though). Arthurian legends, Celtic legends – there were some 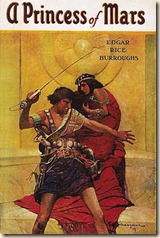 great children’s versions of those around. The first adult SF – actually, it probably counts as fantasy – I can remember buying, though, was Edgar Rice Burroughs’ A Princess of Mars. Looking back, there are aspects of it (the sexism, the racism) that are pretty wince-inducing now, but hey, I was nine. I just enjoyed the adventure, and the sense of a whole strange world. I wanted to be John Carter, though; not Princess Deja Thoris, if I remember her name right. He was the one who got to do the interesting stuff; she mainly just got threatened and rescued. I shall be interested to see if this changes for the film…

I’ve learned quite a bit about the industry from years of hanging around writing forums like Absolutewrite and going to conventions, but actually doing it myself, for real, is different and a little scary. Real deadlines instead of self-imposed ones, for example! But I love it. And everyone’s been so nice, and helpful. Seriously, I hear some outrageous stories, but everyone I’ve dealt with has been great. As to working practice: for the last few years I’ve been getting up early to write before I leave for work. I also meet up with other writers at Million Monkeys once a week, when I can – it’s basically a group write-in. Sometimes it turns into a social occasion too, but the main point is to get a good couple of hours of work in. The sight of people all around you, typing, is very conducive.

Oh, I couldn’t tell you! I started writing almost as soon as I learned to read, and it was always what I wanted to do ever since I knew there was such a thing; though I knew nothing about what being a professional author actually entailed, and how to go about it. As to my first foray into writing? Probably some breathless opus in big wobbly letters about meeting a magical talking cat. Or possibly a unicorn.

I don’t have a single opinion of the genre; I think there are great books and mediocre books and books that other people love that I just don’t get, because not everyone has the same tastes. I do think it’s getting more public recognition and interest, partly because of things like the Lord of the Rings films and the Harry Potter books and 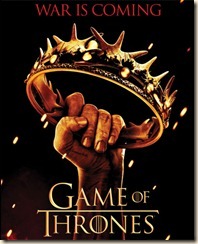 films, and the Game of Thrones series; I’ve noticed people who wouldn’t class themselves as fantasy readers are now picking up the George R.R. Martin novels on the strength of the TV series. Fantasy and SF are no longer seen as a tiny little ghetto for basement dwelling nerds. (Except by people who can’t cope with life without putting down someone else’s taste, obviously – you still see that, sadly.)

As to where Babylon Steel fits in… I think, or hope, I’m following in a proud tradition of fantasy books that raise some issues while also being fun to read.

The sequel to Babylon Steel is the priority at the moment; that’s nearing deadline. I’m working on a collaboration with my partner, writer Dave Gullen, which is sort-of steampunk meets Joan Aitken. Ish. I’ve got a couple of other projects I’d really like more time to work on; a high-fantasy romance with orcs, a sort of comic vampire novel whose heroine is an undertaker’s assistant, a fantasy noir… Too many ideas, not enough time.

I just finished the first book in Robin Hobb’s Soldier Son trilogy, which I loved. I’m reading Max Hasting’s history of the Second World War: All Hell Let Loose, which is brilliant, and shocking. I never realized how much I didn’t know. Oh and the first chapter of a friend’s first novel, which was really good. I am now bugging her to send me more of it. 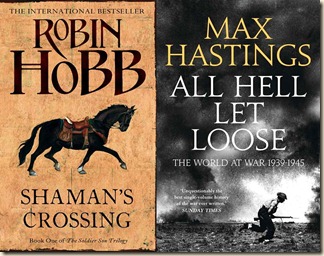 I spend too much time on Cute Overload, and get gooey over babies.

[Confession, I went over to CO after reading this, and spent longer than I care to admit cooing at the pictures of puppies… – Stef]

Going to Jordan and Egypt for a holiday, touring historical sites. I’ve never been before and I can’t wait. And getting this book finished and the next book started!