Described as “Pavane meets The Sopranos, with a hefty dose of Rimbaldi artefacts from Alias”, I was really intrigued when I first heard of this novel. I was lucky enough to receive an early copy, too, which I’ll be reading and reviewing soon. In the meantime, I thought I’d get in touch with Aidan for an interview, to learn more about him, the book and his writing practices. And his answers just made me want to read it even more!

As a debut novelist, I thought I’d start off this interview with something easy: Who is Aidan Harte?

If I knew that I’d have smaller therapy bills. The facts are these: I live and work in Dublin where as well as writing, I sculpt. The two disciplines complement each other strangely enough. To do anything well, one needs distance and working in another medium is a great way to get that.

Your debut novel, Irenicon is published in April by Jo Fletcher Books. How would you introduce it to a new reader?

Folks back away slowly when I call it a medieval martial arts epic.

Irenicon is a Fantasy set in a counter-factual Italy, a land of warring city-states populated by flag-wielding gangs, honorable mercenaries and fanatical scientists, a land where Christianity has taken a strange diversion with world-changing consequences. It’s about two households both alike in dignity, young love and kung fu, and it takes place in a town of crumbling towers divided by a river that shouldn’t be there.

Irenicon is a coming of age story for the protagonist, Sofia Scaligeri, politically as well as emotionally. As Sofia is inducted into the mysteries of Water Style, she is also acquiring a painful political education. She begins as a girl with one view of the town she’s destined to rule, a view that turns out to be almost fatally simplistic. The first part of the story is a claustrophobic immersion into a byzantine world of intrigue. I want the reader to acquire the same distrust of appearances Sofia does, just before the real action kicks off.

This comes from my reading of history. When you look at the families that ruled medieval Italy, you discover that the Medici’s predecessors make them look like the Waltons, and you soon find nothing’s changed when you talk to Italians today.

They fall into of two camps: totally apathetic about politics, or deeply informed but paranoid. The heirs to Machiavelli will throw the official spin aside with the contempt it deserves and tell you the “real story”. Their version will be an elaborate conspiracy with more skulduggery than a Jacobin tragedy. The scheming attains operatic heights but, more often than not, the cynics are on the money. Skepticism is natural given the current chaos, but it also reflects the reality that government is organised crime.

“My father is no different than any powerful man, any man with power, like a president or senator.”

I studied classical sculpture in Florence. A beautiful city but hell to navigate. At first, all the street names sounded the same so I used to find my way around by the corner icons. The terracotta Madonnas are crude compared to the masterworks in the Uffizi but, under their kindly watch, I walked the winding backstreets long enough to realise there was something under the cobblestones that nobody talked about. A while later, I was crossing the Ponte Vecchio pondering a quixotic footnote of Florentine history. In 1503, Leonardo Da Vinci and Niccolo Machiavelli teamed up briefly in an attempt to divert the River Arno. Their un-neighbourly goal was to flood the rival city of Pisa. As you probably guessed, it didn't work – but what if it had? From that question sprang a story of an engineer who attempts to build a bridge in a town so divided.

More generally, what inspires me is music. The immediacy of it. How a chord, a key change, a harmony, or a lyric can knock you flat, make you fly, break your heart. If you can achieve anything remotely like that in writing – or any art form – you’ve done well. Certain lines in certain books get branded on a reader's soul forever and the best critic in the world can’t parse that alchemy of it.

Writing is a solitary endeavour but publishing is a team sport; it’s a truly great feeling when you’ve got an agent, editors and publicists fighting for your book. I know how fortunate I am. Imagine you've limited funds, and the choice of investing in a proven seller and an unknown. In the current climate – in any climate – taking a chance on a new writer is risky, but that’s exactly what good publishers do. That, and work. The folks at Quercus are Trojans. My editor Jo Fletcher had been behind some of the best British Fantasy in recent years. She’s quick, canny and challenging – in short the ideal reader. This is her imprint’s first year but Jo Fletcher Books is set to become known as a home for audacious Fantasy, SF and Horror.

Research is key for a story like Irenicon – Trecento Italy was a land struggling to throw off feudalism, transitioning to capitalism, racked by feuds and a terrible sense of doubt as the old certainties crumbled before the wonderful terrible possibilities of science. Consequently I spent a lot of time researching the dark side of the Renaissance. Brunelleschi, Da Vinci, and Michelangelo just don’t fit the modern cliché of otherworldly pacifist artists. They all gleefully dabbled in military engineering.

There are limits to what books reveal so I visited other Italian towns – Sienna, San Gimignano, Perugia, Assisi and Verona – where the 14th century isn’t so trampled on. You can tell the difference immediately: their towers are still standing. In Florence, towers were outlawed but there's a faded mural in the Orsanmichelle showing the city with a skyline like Manhattan. I hate heights but I forced myself to climb every tower I found. From the tower tops, you can still imagine the intemperate era of Dante, of Giotto, and the forever feuding Guelphs and Ghibellines.

Last year, I toured the Holy Land to research the book I'm writing this year. Like Italy, Israel is a beautiful country with a rich history and, like Italy, it abounds in contradictions.

My path’s been different than most. I didn't realize I wanted to be an author, I just discovered a story I had to tell. The author part was a means to that end. As a visual artist, I grew up reading solely for pleasure. I look back on that period now as blissfully innocent! The trouble is, when you practice a discipline, you inevitably look at your peers’ work asking if you would have done it better or worse. That’s the only downside I can think of with beginning to write. I enjoy problem solving and that’s exactly what writing is: creating lots of problems, and trying to extricate yourself before the deadline. 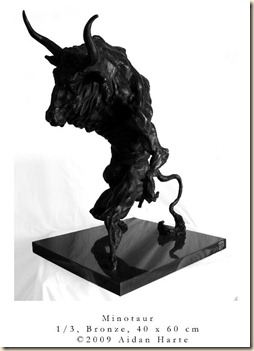 One of Harte’s Scultpures – “Minotaur”

I came late to it so I'm slightly behind the curve – have you read this H.G Wells guy? Genres are possibly more useful to booksellers than readers. The distinction between SF, Fantasy and Horror often seems arbitrary to me. Where do you place Gene Wolfe? I like China Mieville’s timely resurrection of ye venerable term, “Weird Fiction”.

Fantasy readers are so switched-on and passionate that it’s easy to get recommendations; sites like Civilian Reader are great in this respect. But even though I’m catching up, I don’t feel a little distance is a great handicap. In any discipline, there are trends and fashions. Everybody wants to emulate the last guy who struck gold but you can bet that whatever the next guy sounds like, it won’t be anything like the last guy. Contemporaries that stand out? I'm going to be terribly Anglo-centric: I adore Susanna Clarke’s writing, urbane and knowing but always humane. I think some of Mieville’s short stories bear comparison to Poe’s.

The greatest thing with Fantasy is that once in a while you get writers who just don’t fit. It's nothing as superficial as how they construct sentences - it's the way they think. In a Fantasy nothing is true (in a narrow sense) so the author has to make up the deficit. For better or worse, the author’s personality comes crashing over you. Take Lovecraft: in life he must have been a repellent toad, but on the page that furtive bigoted hyper-sensitive personality is transmuted into something precious.

I’ve almost finished the sequel to Irenicon, The Warring States. As that working title suggest it’s got a much larger scope. In Irenicon we were introduced to Rasenna, the quarrelsome town that Sofia Scaligeri believed herself destined to rule. In The Warring States we discover the world that Rasenna’s renaissance takes place in and its impending clash of civilizations, while Sofia discovers her destiny is greater than she ever imagined.

Irenicon is a big book and this promises to be even bigger. My outline exploded the second I started writing so it’s been similar experience to checking in to an asylum for a year. I always thought it was the utter bunk when authors talked about characters “taking charge”.

Guess what? It happens.

The pipeline is currently jammed with the third as-yet-untitled book which will complete the Wave Trilogy.

I just finished The Man who fell to Earth by Walter Tevis. It floored me. A choice example of the gems chumps who only read Literary Fiction miss. You can’t help but roll your eyes when you read the premise, but this tale of an alien come to earth turns out to be one of the most witty, wise and touching fables of the last century.

I read fiction in one bite, but tend to have several non-fiction books on the go, mostly history and politics. Top of the pile is Democracy: The God That Failed by the combative Hans-Hermann Hoppe. Nothing as bracing as a good polemic. 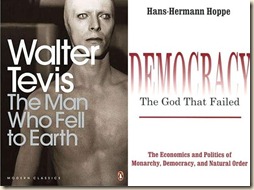 I drew all the maps for Irenicon, I directed a TV show that appeared on BBC and Cartoon Network and I've seen more B-list kung fu than can possibly be healthy.

The launch of Irenicon at Eastercon on April 7th. Come along! After that, I'm going to take a month to make some new sculptures, and then dive back into the Wave.