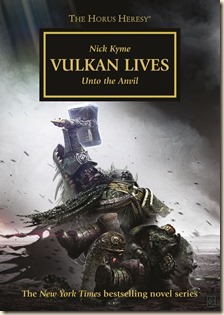 In the wake of the Dropsite Massacre at Isstvan V, the survivors of the Salamanders Legion searched long and hard for their fallen primarch, but to no avail. Little did they know that while Vulkan might have wished himself dead, he lives still... languishing in a hidden cell for the entertainment of a cruel gaoler, his brother Konrad Curze. Enduring a series of hellish tortures designed to break his body and spirit, Vulkan witnesses the depths of the Night Haunter’s depravity, but also discovers something else – a revelation that could change the course of the entire war.

How does one review a novel that packs in so very many revelations? With great difficulty, as it happens… Vulkan Lives is a great novel. It is a superb addition to Black Library’s New York Times-bestselling sci-fi series. It is a superb example of intelligent, thoughtful science fiction. It’s not flawless, true, but I loved it. I have a feeling it won’t be met with universal acclaim from the more action-oriented sections of the WH40k fan-base, but I think it does a great job of fleshing out some hitherto overlooked events and questions of the era.

On the ravaged planet of Traoris, Sebaton is leading an excavation of an artifact that a force of the zealous, fanatical, corrupt Word Bearers are also looking for. After fleeing the site (with the item), he is chased by a pack of hunter. Frustratingly, he loses the item and is in turn picked up by a motley group of Isstvan V survivors (a force of 26 Astartes from the Salamanders, Raven Guard, and Iron Hand Legions). The survivors have been tracking the Word Bearers, harrying their operations and attempting to mete out a measure of revenge.

Vulkan, meanwhile, is being tortured by his brother, Konrad “Night Haunter” Curze in what I suppose one could describe as a Primarch-worthy Gitmo. We get to know how these two think a bit more, which I certainly welcomed. We learn of their difficult, strained relationship, with flashbacks to a particular campaign during which the Salamanders and Night Lords were paired up. Their fundamentally different tactics and temperaments were bound to put them at odds, but the trajectory of this dispute is a long and brutal one. I found their interactions expertly written and gripping, proving Kyme is skilled enough to maintain the excellent quality of the Horus Heresy series. (I must admit, I was concerned after I read Promethean Sun, which didn’t meet expectations.)

Sprinkled throughout the novel, we also get more detail of the Salamanders’ fight on Isstvan V, the betrayal and massacre that they had to fight through. The flashback chapters are presented from a number of perspectives, which helped keep things fresh and varied.

And that, sadly, is all I can say about the actual story. Vulkan Lives is packed with revelations. We learn more about the “perpetuals”, a breed of immortals who have started to crop up with greater regularity and centrality to some Heresy stories. Chapter 20 had a huge reveal, something that had been hinted at, true, but even getting it confirmed felt momentous (coupled with the ending, too…). I loved to learn more about Vulkan and the Salamanders, and am eager to learn more still. (I have yet to read Kyme’s Tome of Fire series, set in the ‘contemporary’ WH40k timeline – expect this to be rectified hopefully very soon).

Vulkan Lives is really quite excellent. There were some ups-&-downs in the momentum and pacing, but overall this is an excellent addition to the series. If Black Library doesn’t ask Kyme to write a sequel, it would be a crime.

I can’t wait for the next installment in the series. Highly recommended.