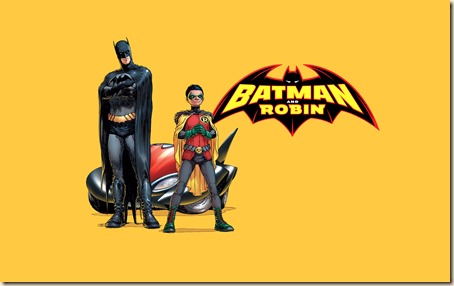 I’m still catching up with a huge backlog of comics/graphic novel reviews, but I decided to collect these two books together. Partly because they’re obviously connected, but also because I wanted to get the reviews out of the way. After liking the first volume in Grant Morrison’s Batman & Robin run far more than I anticipated (I’ve written plenty of times how I think he’s highly over-rated), I dove in to the second and third volume pretty soon afterwards. (Told you I was being slow with reviewing…) Sadly, my pleasant surprise at the quality of volume one evaporated with these two books. These are, frankly, not so good. 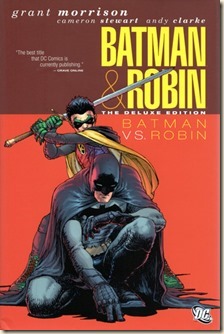 The new Batman and Robin uncover clues involving the mysterious death of Bruce Wayne before facing off against each other in a heated battle instigated by Robin's mother that both heroes will regret - if they live through it! Featuring a 3-issues storyline that ties into the best-selling BLACKEST NIGHT event titled "Blackest Knight," this new collection is a must-have for both new readers and longtime fans of Grant Morrison's Batman epic as the superstar writer unveils more of his genre-defying masterplan!

We start in London. And this is the Grant Morrison I know. The story contains some thinly-veiled (to a Brit, at least) social and political commentary. Nothing wrong with this per se, but it wasn’t particularly well-done. Also, #7 (the first chapter in this book) was a bit muddled, to be honest. Suddenly, Batwoman’s there (why?), and also the Knight & Squire. Frankly, this was not good, following the previous issues.

The Batwoman story and presence was dealt with in two pages. There was some linkage to Morrison’s Event that killed Batman. It was not great, and rather rushed. Oh, and then Damian takes over as chairman of the board for Wayne Enterprises! At age 10! Of course! That isn’t moronic at all!

This book starts the return of Bruce Wayne. The story has moments which are quite fun, but the dialogue can sometimes be awful... (“It’s like the whole house is coming to life.” – #10, p.11) The story jumps forward, after getting us some way through the ‘treasure hunt’, only to not bother with the end of it. This just reinforces my belief that Morrison is a lazy writer. The story was half-assed. Really disappointing. At the same time, I didn’t see the end coming. So there’s that, I suppose.

Volume 3: “Batman and Robin Must Die!” 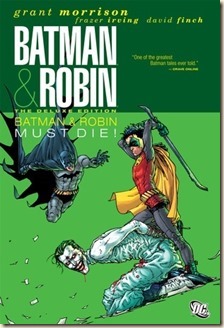 On the eve of Bruce Wayne’s return to Gotham City, the new Batman and Robin team that battled crime during his absence must deal with the return of The Joker.Then, Grant Morrison connects the BATMAN & ROBIN story with the bestselling THE RETURN OF BRUCE WAYNE in the climactic showdown between Batman and The Black Glove.

And in a story illustrated by acclaimed artist David Finch, learn what happens to Dick Grayson after the “real” Batman returns.

That is basically how I feel about this book. It feels like Morrison is in a hurry to get things over with. The book ends with Batman Incorporated established – an event that spawned one of the worst books I’ve read. It is a dismal finish. Bruce Wayne just appears back in action at the end. There’s no real development of why or how (I assume one had to read The Return of Bruce Wayne and who knows how many other books/issues to get the full story).

So much has happened to the Bat-franchise during Morrison’s tenure at the helm, and I’m not at all convinced it’s all (or even mostly) good... This was, in many ways, complete gibberish. Maybe, as I’m sure die-hard Morrison fans will argue/wail, I just don’t “get” it, that he’s writing on a level that is above my comprehension. Ultimately, though, I just think he’s a bad writer.

I think I’ll probably just borrow the New 52 Batman Incorporated from my local library (it gets an excellent selection of New 52 books in), as once again he’s been handed the reins for another game-changing event. (Seriously, how can anyone think he’s the best choice, when compared to everyone else currently writing for a Bat-title?!)

I much prefer Peter Tomasi’s take on Damian Wayne, in the New 52 Batman & Robin. Tomasi’s writing overall is also superior in pretty much every way. Actually, everyone else working on Batman-related titles is doing a better job by far. I think I’m done attempting to find the supposed genius and/or magic in Morrison’s work. It just isn’t there, and I’m disappointed every time. Well, always except for one instance: Action Comics #0 wasn’t bad.

A closing comment for both of the books: the art is good. The one benefit of Morrison’s reputation, is that DC has allowed him to work with some exceptionally talented artists. For that, at least, we can be very grateful. The artists who worked on both of these books do a great job throughout.

One final comment: At least the Pink Flamingo wasn’t present in these books. He was an utterly ridiculous character.