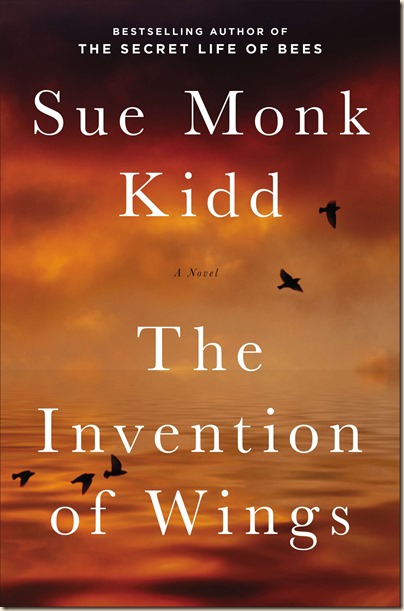 THE INVENTION OF WINGS is the next novel by Sue Monk Kidd, whose debut novel was the mega-selling The Secret Life of Bees. The reason I’m sharing the image, despite being a rather nice cover, is because my eye was caught by the data on the aforementioned debut:

The Secret Life of Bees spent 175 weeks on the New York Times trade paperback bestseller list; it has sold more than six million copies in the United States alone; it has been translated into 36 languages. And it was turned into an award-winning movie. That’s incredible. Now, all I have to do is write one similarly excellent, and I can stop worrying about making enough money to buy food… [Only half kidding…] Incidentally, Kidd’s second novel also landed on the New York Times bestseller list at number one.*

The Invention of Wings has been described as “a sweeping novel of hope, daring, the quest for freedom, and the desire to have a voice in the world.” The novel is due to be published in January 2014 in the US by Viking (Penguin). With my new plans to start featuring more non-speculative, non-SFF novels on the blog, I think I may just have to get my hands on a copy of this. Here is a sort-of-synopsis, from the publisher:

The Invention of Wings tells the entwined stories of Hetty “Handful” Grimke, an urban slave in early 19th century Charleston, who yearns for life beyond the suffocating walls of the wealthy Grimke household and the Grimke’s daughter, Sarah, a real-life historical figure, who grows up to become a leading abolitionist and women’s rights pioneer. Kidd goes beyond the record to flesh out the rich interior lives of all of her characters, both real and invented.

* After working in and around the publishing industry for almost a year, I am finding numbers like these increasingly impressive, now that I’ve discovered just how nuts the industry actually is…

Posted by Civilian Reader at 10:15 PM