A couple more Warhammer Undead novels in the pipeline from Josh Reynolds: Neferata and Master of Death. 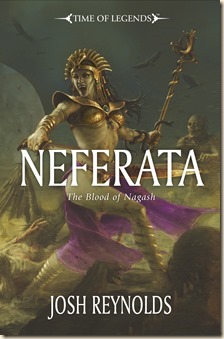 Ok, so Neferata is actually already available (in paperback and eBook), but Black Library seem to be re-releasing their Warhammer Legends series with new (and, frankly, better) covers. Here’s the synopsis for Neferata:

The vampire queen Neferata plots to create a new empire.

Neferata is a queen without a kingdom. Lahmia has fallen, her vampire children have scattered and she is reduced to draining blood from the beasts of the mountains. After a chance encounter with a party of dwarfs, she sets her sights on a capital for her new empire – the stronghold of Silver Pinnacle. She calls her allies to battle – but can she truly trust Ushoran, Lord of Masks, and his bestial Strigoi vampires? 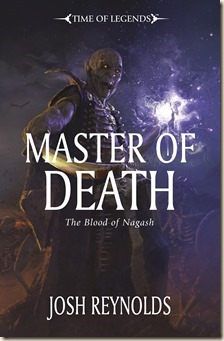 Next up is Master of Death, the follow-up novel (which has not been available before)…

An ancient follower of the Great Necromancer seeks power over death itself.

W’soran, one of the first vampires and former pupil of the Great Necromancer Nagash, plots to unravel the secrets of life and death. But his hunt for power is interrupted by a civil war in Mourkain, the mountain nation ruled by his former ally, Ushoran. Now W’soran must battle old friends and new enemies as he weaves a complex web of treachery and deceit in order to anoint himself the Master of Death…

Master of Death is also due to be published in January 2014.

I haven’t had a chance to read Neferata, yet, but after reading Master of Mourkain, a short story by Reynolds, my appetite was certainly whet for more of his Undead fiction.