“The Magicians” by Lev Grossman (Arrow/Plume) 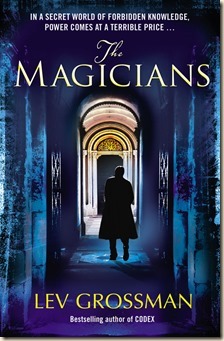 An intriguing first volume in a new series

In a secret world of forbidden knowledge, power comes at a terrible price...

Quentin Coldwater’s life is changed forever by an apparently chance encounter: when he turns up for his entrance interview to Princeton he finds his interviewer dead – but a strange envelope bearing Quentin’s name leads him down a very different path to any he’d ever imagined.

The envelope, and the mysterious manuscript it contains, leads to a secret world of obsession and privilege, a world of freedom and power and, for a while, it’s a world that seems to answer all Quentin’s desires. But the idyll cannot last – and when it’s finally shattered, Quentin is drawn into something darker and far more dangerous than anything he could ever have expected...

I’m rather late getting to this novel. It’s been out for a while, and I actually have multiple copies of it – eBook, UK edition, and also a signed US edition (which I picked up in January 2013 in Boston, when Mr Grossman dropped by the MLA conference). There’s been a lot written about this novel already, but I’ve been studiously avoiding any and all reviews. I really enjoyed reading this. It’s not perfect, but it is both clever and engaging. Obviously the first part of something much larger, I would certainly recommend it.

There’s so much going on in here, and it’s done really well. The novel is a little strange, too (the whole business with Brakebills South, for example). Grossman moves through five years of magical schooling in the first half of the novel, before sending our characters to Manhattan. It’s a compressed version of the classic origin/training montage trope. We learn a fair bit about magic in this reality, but at the same time Grossman doesn’t get bogged down in details, thereby maintaining the momentum and mystery about the art. Where other authors may have given in to the temptation to create the languages or delve into long descriptive passages of the conjuration gestures, Grossman is thankfully restrained.

“Learning magic was nothing like that. It turned out to be about as tedious as it was possible for the study of powerful and mysterious supernatural forces to be. The same way a verb has to agree with its subject, it turned out, even the simplest spell had to be modified and tweaked and inflected to agree with the time of day, the phase of the moon, the intention and purpose and precise circumstances of its casting, and a hundred other factors, all of which were tabulated in volumes of tables and charts and diagrams printed in microscopic jewel type on huge yellowing elephant-folio pages. And half of each page was taken up with footnotes listing the exceptions and irregularities and special cases, all of which had to be committed to memory, too.”

After the characters leave Brakebills, things get a little stranger. There’s something about the magical community’s lives post-college that is both interesting and slightly depressing. True, they have magical abilities that effectively means they can do and have whatever they want. Given their abilities, they need never work (though many do), making them like the young and restless, but with magical skills. They become the bored monied-youth, sometimes. Quentin and his crowd end up as regulars on the party scene, sampling all the drugs, all the alcohol, and staggering home in the wee hours almost every night. (All except Alice, which causes some strange friction and a less-than-excellent relationship car-crash later on.)

The use of the “Fillory” books as a narrative device and framework, only to be deconstructed, was very cool. The fictitious fantasy series is clearly a Narnia analogue. As someone who grew up with the Narnia stories, this was really interesting and I knew most of the references. It’s a mixture of nostalgia, cynicism, and amusement that works really well. I also loved how all of their expectations were shattered when they eventually arrived in Fillory (that’s not a spoiler), and how the reality was nowhere near the fantasies they had read about and imagined. In some ways, Grossman has made a case for Grimdark, if only to warn us against accepting the ideal, to be careful what we wish for, and also ‘teach’ us that life is never as easy as we might be led to believe. I had a brief chat with someone on Twitter about this, and he made a very good point about the deconstruction of the Narnia-tropes: not much is done to then reconstruct them. The Magicians does, therefore, have an unfinished feel to it – it is clearly the first part of something larger, which may irk some readers. I really liked it, though. 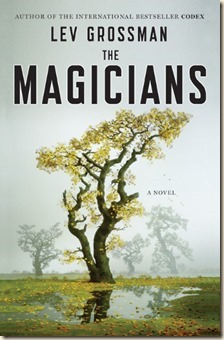 Despite all of this, there were moments that didn’t quite work as well as they could have. Mainly, these were momentum-related, or when we jumped ahead in the story, or when a scene didn’t feel quite as polished as most of the novel. It didn’t detract from the overall story, but there were a handful of scenes I had to go back and check, to make sure I’d read it right the first time. The first time we meet Penny, and he attacks Quentin, was one of the strangest scenes. Interestingly, the ‘romantic’ side-stories and the break-ups aren’t the best – this element of storytelling does not appear to be Grossman’s strong-suit. At the same time, they were awkward and clunky enough to be mostly realistic.

All of the characters are interesting, but we only really get to know Quentin in any depth. He’s an interesting protagonist and guide to both Manhattan and the magical community: he’s gifted, but highly flawed (selfish, miserable, self-pitying, sometimes weak and cowardly). It would have been nice to get to know a couple of the other characters better, but I understand why Grossman may have chosen this approach – it matches Quentin’s stand-offish character, his detachment from, and even inability to form attachments with, others. Hopefully we’ll learn more about them in the next installment.

I’m certainly eager to read The Magician King, now. I hope to get to it very soon. Overall, then, The Magicians is definitely recommended for all. Anyone with an interest in fantasy, or anyone who grew up with Narnia, should like this. It’s well-written, well-composed and well-conceived. An admirable achievement.

The Magicians is published by Arrow Books in the UK and Plume in the US. The Magician Kings is out now, too. The third book in the series, The Magician’s Land, is due to be published in 2014.