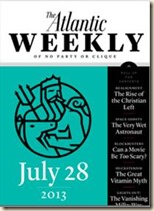 In the current issue of The Atlantic Weekly (July 28th), there is a very good, short piece by Stephen King about opening lines. In the article, part of The Atlantic’s “By Heart” series, King also offers the following opinion on voice. Many bloggers discuss or focus on voice in their reviews (some obsessively so), and I thought this might be of interest to them, as well as readers, of course…

“... for me, a good opening sentence really begins with voice. You hear people talk about ‘voice’ a lot, when I think they really just mean style. Voice is more than that. People come to books looking for something. But they don’t come for the story, or even for the characters. They certainly don’t come for the genre. I think readers come for the voice.

“A novel’s voice is something like a singer’s; think of singers like Mick Jagger and Bob Dylan, who have no musical training but are instantly recognizable. When people pick up a Rolling Stones record, it’s because they want access to that distinctive quality. They know that voice, they love that voice, and something in them connects profoundly with it. Well, it’s the same way with books. Anyone who’s read a lot of John Sanford, for example, knows that wry, sarcastic amusing voice that’s his and his alone. Or Elmore Leonard – my God, his writing is like a fingerprint. You’d recognize him anywhere. An appealing voice achieves an intimate connection, a bond much stronger than the kind of forged, intellectually, through crafted writing.

“With really good books, a powerful sense of voice is established in the first line.”

Stephen King’s Doctor Sleep, a new follow-up to The Shining, will be published in September 2013 by Hodder (UK) and Scribner (US).

Also, here is a rather nice photo of Stephen King, which I found connected with this interview with the author over on Parade: 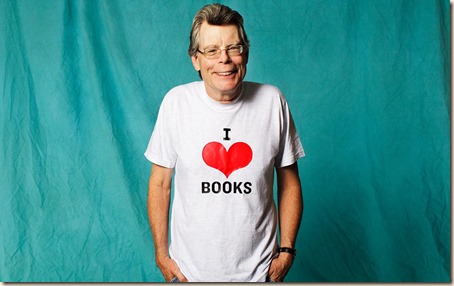 Joe Fassler (the journalist behind the “By Heart” series), inspired by Stephen King’s piece, conducted a survey of some other authors’ favourite first lines, here. Other authors to feature in the “By Heart” series, who have also featured on Civilian Reader, are Susan Choi (CR interview), and Benjamin Percy (interview, Red Moon review).

Posted by Civilian Reader at 4:19 PM