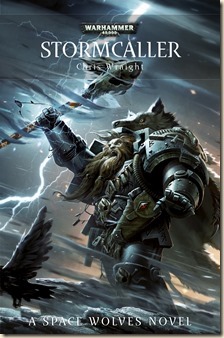 The final Upcoming post related to Black Library for a little while, this is for the second in Chris Wraight’s Space Wolves series: Stormcaller. The sequel to Blood of Asaheim (which I really wish I’d had the chance to read by now), I’m really looking forward to it:

As events on the plague-wracked world of Ras Shakeh spin out of control, the Imperium descends upon the world in force. Njal Stormcaller, Space Wolves Rune Priest, arrives to reinforce the embattled Jarnhamar pack, and finds his battle-brothers at one another’s throats, each pursuing their own agendas. Meanwhile, the forces of the Ecclesiarchy arrive to retake their world and uncover the sinister secret behind the world’s corruption, a secret that threatens the survival of the Imperium itself…

One of the first Games Workshop books I ever bought was Codex: Space Wolves. Njal Stormcaller was a pretty prominent special character for Warhammer 40,000 game at that point. Interestingly (at least for me), the first ever issue of White Dwarf, the monthly gaming magazine that Games Workshop publishes, also featured the Space Wolves, as I think they’d just been re-released or something. It was so long ago, I can barely remember the details, expect for the battle report and the fact that Ragnar Blackmane was released that month. Perhaps. This would have been back in 1994/5, I think? [Damn, I’m getting old…] I kind of miss getting the magazine – I always liked looking at the new miniatures and reading the short bits of fiction and background when they were included. (This was before Black Library started, so there wasn’t much Warhammer fiction available at all.)

Stormcaller is due to be published by Black Library in March 2014. 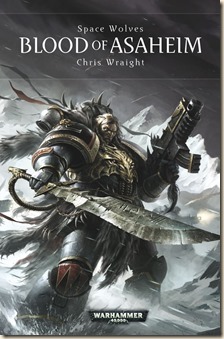 And, in case you weren’t aware of it, here’s the synopsis for Blood of Asaheim…

The feral warrior-kings of Fenris, the Space Wolves are the sons of Leman Russ. Savage heroes, few can match their ferocity in battle. After half a century apart, Space Wolves Ingvar and Gunnlaugr are reunited. Sent to defend an important shrine world against the plague-ridden Death Guard, the Grey Hunters clash with the pious Sisters of Battle, who see the Space Wolves as little better than the enemy they fight. As enemies close in around them and treachery is revealed, Gunnlaugr and his warriors must hold the defenders together – even as hidden tensions threaten to tear their pack apart.

Blood of Asaheim is out now in Hardcover and eBook.