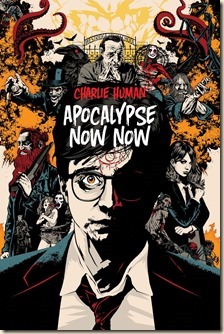 I love the smell of parallel dimensions in the morning.

Baxter Zevcenko’s life is pretty sweet. As the 16-year-old kingpin of the Spider, his smut-peddling schoolyard syndicate, he’s making a name for himself as an up-and-coming entrepreneur. Profits are on the rise, the other gangs are staying out of his business, and he's going out with Esme, the girl of his dreams.

But when Esme gets kidnapped, and all the clues point towards strange forces at work, things start to get seriously weird. The only man drunk enough to help is a bearded, booze-soaked, supernatural bounty hunter that goes by the name of Jackson ‘Jackie’ Ronin.

Plunged into the increasingly bizarre landscape of Cape Town’s supernatural underworld, Baxter and Ronin team up to save Esme. On a journey that takes them through the realms of impossibility, they must face every conceivable nightmare to get her back, including the odd brush with the Apocalypse.

This is an extremely strong debut novel, from an author who exhibits a great deal of talent and potential. Apocalypse Now Now is bonkers, twisted, very funny, and utterly engaging. I read this a little while ago, but Human’s characters and writing have stayed with me. The author channels the best of Urban Fantasy, makes it his own, and blends it with a Hunter S. Thompson-esque flair for language. This was a lot of fun.

[Full disclosure: I now work for Charlie Human’s agent. So I probably shouldn’t be reviewing this, but I loved it and wanted to at least write something.]

Baxter is an interesting and fun guide to the Cape Town supernatural underground. He is not your typical teenager. He’s possibly crazy, Machiavellian, a little paranoid, and definitely sociopathic. He picks on his brother, who is slightly mentally handicapped. He’s unpleasant to a lot of people. He runs a porn-ring. He goes to a fancy-ish school in Cape Town:

Like all prominent high schools in the leafy Southern Suburbs we have lush school grounds, sophisticated computer labs that were out of date as soon as they were installed, a debating team, a competitive rugby team, and gangs, drugs, bulimia, depression and bullying.

It’s an ecosystem; a microcosm of the political, economic and military forces that shape the world. Some high-school kids worry about being popular or about getting good marks. I worry about maintaining a fragile gang treaty that holds Westridge together. Horses for courses, as my dad says.

The first two-thirds of the novel make up what has to be the strongest start to a debut series I’ve read in a very long time. We get a superb, guided tour of Cape Town’s underground, and also plenty of interesting asides about South African folklore and mysticism. The story builds to a rather strange ‘Big Boss Fight’, which I didn’t find quite as compelling as the world-building and character-development in the first two-thirds of the book. True, there’s a lot of world-building and attention to establishing the characters, but I was never bored. In fact, I would have happily read even more of his creations. I haven’t come across a more-immediately-gripping UF series than this.

I felt I really got to know Baxter, the members of the Spider (especially Kyle, Baxter’s closest friend), Ronin and everyone else. They interact realistically, they bitch and gripe at each other. Baxter makes the adults he interacts with extremely uncomfortable. Maybe the only character who wasn’t expertly incorporated into the story was Esme, which is strange, given that her kidnapping forms much of Baxter’s motivation in the story… A minor weakness, though, in an otherwise superb novel.

Human’s writing is immediate, addictive, funny, and expertly crafted. The humour is natural, understated, often rather dark, and I often chuckled and laughed-out-loud on the train and Tube. Baxter’s internal monologues (and dialogues, as it turns out… just read it) are cynical, fresh, and often very funny. It’s like he sees the world with one eyebrow permanently raised.

Encouraging a sweet and fragile teacher – distraught at the thought that we don’t care about her class, and driven to hysteria by consistent and vicious undermining of her authority – to throw herself from the second storey is wrong. But it’s also fun. 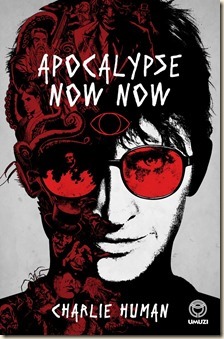 This is a pretty short (somewhat disjointed) review, I know. But this is a novel that has to be read to be properly appreciated. I could provide near-endless quotations and descriptions of his original and brilliant creations. But that would rob the novel of its impact, when you pick it up yourself (which you must!). I’d love to sit down and chat with people who have read this, going through various plot points, jokes, etc., in more detail. I took a greater-than-normal amount of notes, mainly favourite quotations and jokes. Let’s hope plenty of other people read it, so I have others to chat to about it.

Needless to say, Charlie Human has proven that Urban Fantasy is still a very vibrant and diverse genre, with considerable scope for originality and invention. He’s also messed around with a lot of the genre’s tropes, twisting things into new shapes, while remaining true to some classic themes and aesthetics. I really can’t wait for the second novel in the series. (It’s on its way.) Cape Town is a refreshing location for the story, and adds so much to how the author has created his supernatural community and mythology. It’s really great.

I recommend this very highly to anyone with even a slight interest in Urban Fantasy. Also, to just anyone who’s looking for something original, very well-written, funny, dark, and genre-blending. Charlie is definitely an author to watch, and I think we’re still only scratching the surface of what he can, and will do.

Apocalypse Now Now is out, uh, now in the UK.

Posted by Civilian Reader at 2:35 PM